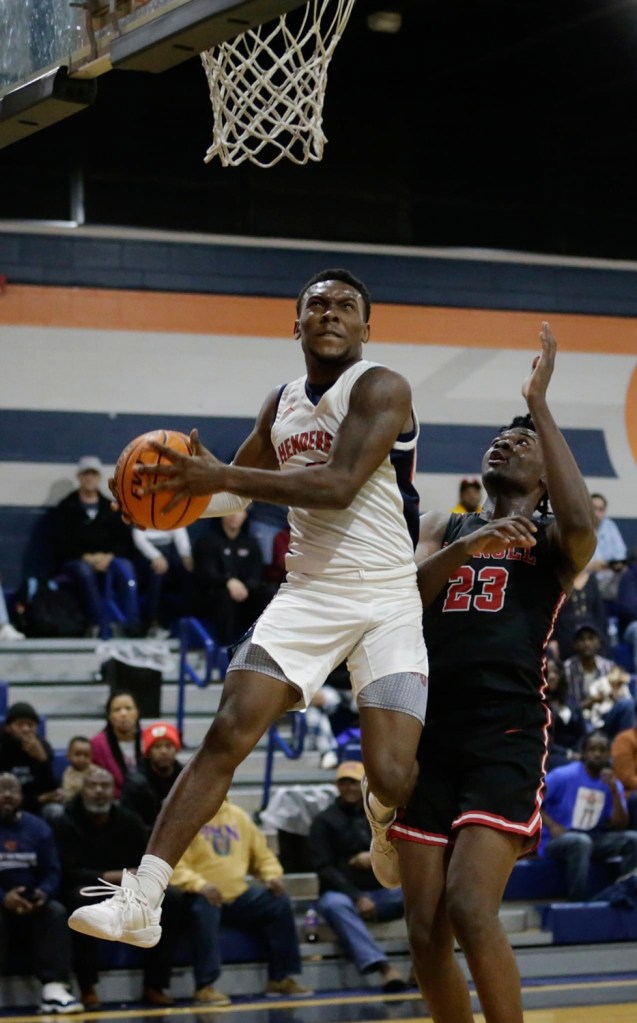 Jywon Boyd’s 20 points in the third quarter against Carroll helped lift the Trojans to a regular season area crown. (Photo by Dan Smith)

The Trojans were playing at home for the first time since Dec. 17, 2022, which led to a fired up Betty Wagner Gym for the entirety of the contest. That fact also may have caused the Trojans to be a little too fired up as Charles Henderson shot just 22 percent from the field in the first half.

Carroll jumped out to an early 8-3 lead in the first quarter but the Trojans took a 9-8 lead with 1:56 left in the opening period. CHHS led 13-10 going into the second quarter.

Charles Henderson went completely cold in the second quarter as Carroll went on a 15-0 run to start the period and jumped out to a 25-13 lead. The Trojans rallied, however, and ended the period on a 9-3 run with senior Austin Cross burying a three-pointer with 15 seconds left in the half to cut the Eagle lead to 28-22 at halftime.

The third quarter belonged to Charles Henderson’s Jywon Boyd, however. Boyd took over and scored eight straight points to start the period to give CHHS back its lead and allowed the Trojans to take a 47-39 lead into the fourth quarter. The Trojans scored more points (25) in the third quarter than they had in the entire first half with Boyd tallying a staggering 20 of Charles Henderson’s 25 points in the period.

Carroll attempted to rally early in the fourth quarter but the Trojans forced seven turnovers in the final period and outscored Carroll 19-15 to secure yet another area win.

“He was big. He was huge,” CHHS coach Tim Fayson said of Boyd’s performance. “He’s starting to become a leader, which is what we need. Once you get to a point, you just say, ‘Jywon go play. Now, it’s your time.’ That’s the luxury of having an athlete like that. When the game gets like that you just give him the ball and the game gets simple.”

“We won, it wasn’t pretty but we won,” Fayson said. “I think with the crowd – not playing at home for awhile – and the energy of the crowd, we came up a little bit too amped up and played a little out of character in the first half. We settled back down in the second half.”

Charles Henderson is back at home on Thursday against Pike Road.