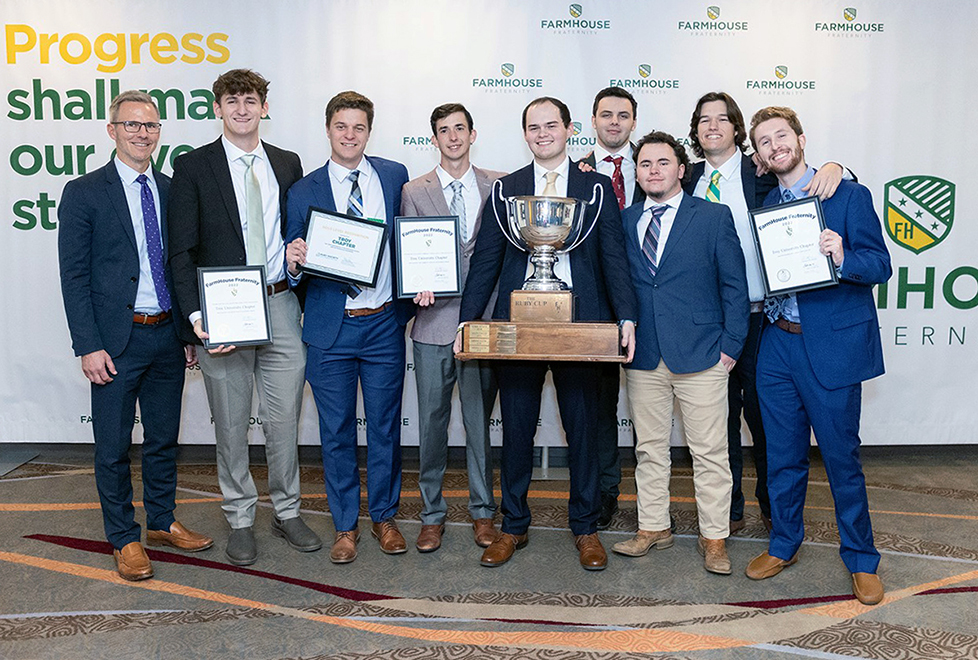 The Troy University Chapter of FarmHouse Fraternity was recently awarded the 2022 Ruby Cup during the annual FarmHouse Leadership Institute conference.

This is the third time the Troy University FarmHouse chapter has received the award over its 27-year history. Chancellor Dr. Jack Hawkins, Jr., commended the chapter on their successes this past year.

“This prestigious award reflects the high standards for which FarmHouse is known (for) at Troy University and is an indication of what is right within America’s Greek System,” Dr. Hawkins said. “I am immensely proud of the chapter and congratulate its members on receiving the Ruby Cup for the third time in 27 years.”

According to Troy University FarmHouse President Garrett McKeon, a junior risk management major from Buford, Ga., the Ruby Cup is the most prestigious award that can be given and is awarded each year to the most outstanding chapter of the International Fraternity based on “dozens of criteria.”

“Our executive board worked hard to accomplish this goal,” he said. “I would like to thank the Troy University Administration for their continued support of FarmHouse Fraternity. Their support has allowed our chapter to grow, and to show that Greek Life is able to thrive at Troy. We are eager to start the year and to continue building upon the successes that we have had this past year.”

In addition to the Ruby Cup, the chapter achieved 3-Star Excelsior Level Chapter Status and was recognized as a Top Tier Recruitment Chapter and for having 100 percent chapter membership in the Ruby Society. They also received the Community Service Achievement Award.

“We are so proud of our FarmHouse chapter for receiving these honors, not only this year, but over the entirety of their history here at Troy,” said Dr. Dendy Moseley, Associate Dean of Student Services. “This organization has exhibited a commitment to excellence. It is a testament to the foundation by which the organization was built and the continued leadership year after year. FarmHouse Fraternity is truly a gem for Troy University and the Greek-lettered community here at Troy University.”