Russell Thomas sworn in as sheriff 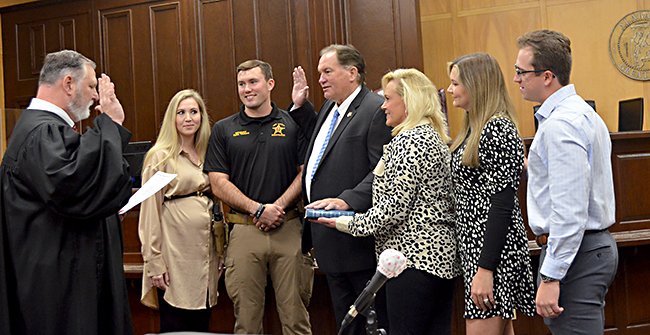 Pike County Sheriff Russell Thomas was sworn in for his eighth term of service to the people of Pike County on Friday afternoon by Pike County Probate Judge Michael Bunn.

Thomas said, each time, he has taken the oath of office with great humility and appreciate to the citizens of Pike County.

“To know that people have enough confidence in me to re-elect me as their sheriff means more to me than I can say,” Thomas said. “I am honored and I am humbled.”

Thomas was elected as the county’s chief law enforcement officer in 1994 in record numbers. He received 75 percent of the votes cast, the most votes in Pike County history, and won every election precinct in the county.  He was re-elected without opposition1998, 2002, 2006 and 2010.

Thomas said, since he first took office, he has dedicated himself to serving Pike County, “day and night.”

“The door to my office is always open,” Thomas said. “I have a good team of deputies and we all work extremely hard on each and every case so that no case goes unsolved.”

Thomas said Pike County is his home and he knows most people in the county, personally, and others through their “family trees.”

“I don’t shy away from service to the people we serve” he said. “The Pike County Sheriff’s Department does the best and the most for our people. We take pride in what we do and responsibility also.”

Thomas expressed appreciation to the people of Pike County for allowing him to continue to do the job that he loves.

“I get up every morning excited to go to work” he said. “Every day is different. Every problem is different and I dedicate time to listen and to listen with understanding. I want people to have confidence in me and to know that the Pike County Sheriff’s Department is there to do what needs to be done to assist them.”

Thomas said is honored that the voters of Pike County continue to have confidence in his abilities to serve in the capacity of the sheriff of Pike County.

“I’m a common man, trying to do the best job I can,” Thomas said. “I am blessed that the people of Pike County continue have confidence in me as their sheriff. I will continue to serve them the best way I know how and can.”