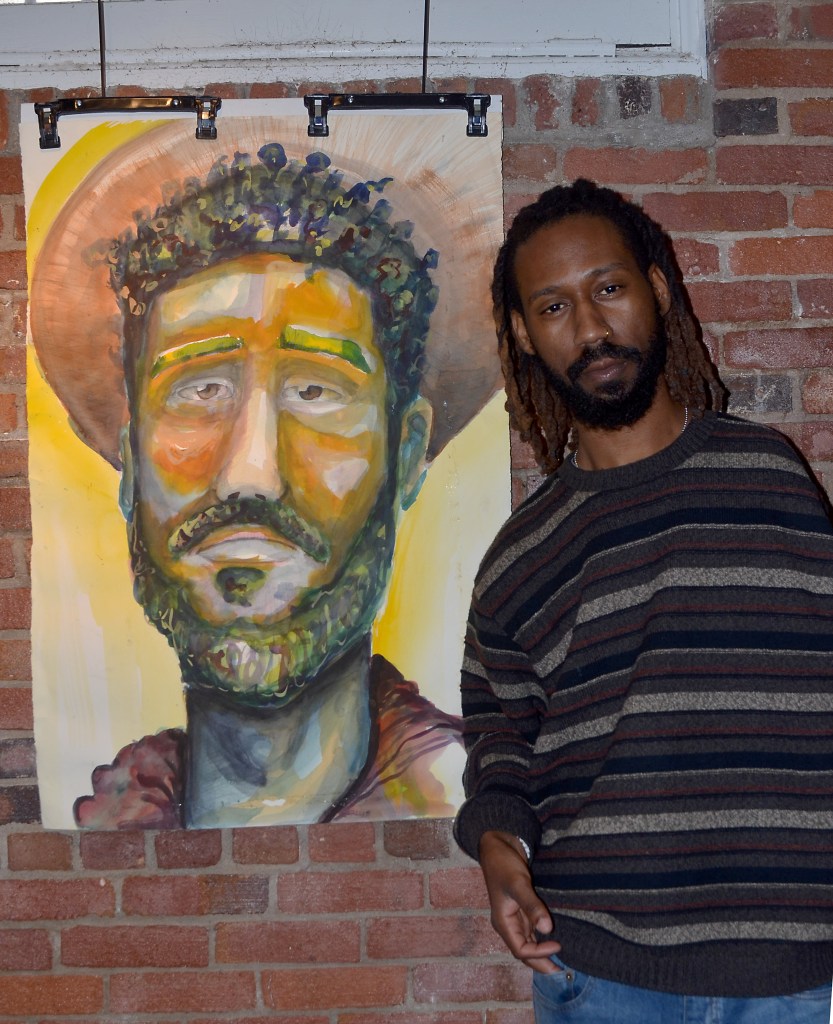 Photos by Jaine Treadwell Antonio Jamall Holmes’ exhibit, “It Ain’t All Black and White,” is currently on display at the Johnson Center for the Arts. (Below) One of Holmes’ pieces titled “Sacrifice.”

The Johnson Center for the Arts proudly presents Antonio Jamall Holmes’ first solo art show. The reception for the Troy artist is set for 5 until 7 p.m. Thursday, January 14. The public is invited.

“Wow!” and “Amazing” are the words most used to describe Holmes’ artwork, said Reba Allen, JCA graphic artist. “This is a show that will interest all ages and a one-time visit will not be enough.”

Holmes said he has always wanted to be an artist.

“From as far back as I can remember,” he said. “Growing up in small towns in Alabama all my life, I never knew of actual artists but I always thought the people and land were as beautiful as any art.”

With those thoughts came the dream, the desire to capture the world as viewed through Holmes ‘own eyes.’

“The idea of people and where they came from has always intrigued me so those thoughts have found the way into my art,” Holmes said. “As humans, we are layered souls with countless reasons as to why we do anything in our current lives. Within mere steps, we have the power to alter distant futures of generations to come.”

Holmes said the magnitude of vison and power alone is beautiful.

“It is through these layers of steps, thoughts and pages of life that I find new life in my own work and inspiration to further create.”

Antonio Jamall Holmes’ solo exhibit is a cascade of color of texture and of wonder. And, it’s titled “It Ain’t All Black and White” Holmes said, with a smile. “The exhibit is a little of many things and from many things.”

Holmes can be seen in many of his works, if you know him and know how to look and where to look.

And, Holmes looks everywhere with an artist’s eye for inspiration and for ways.

“These works are made from sheets of Styrofoam,” he said of the large colorful hanging creations. “Others are graphite on paper, some are found objects and others are …?” Holmes will talk about them.

The artists said his hopes are that those who view “It Ain’t All Black and White” will believe, too, that art is not black and white but a mixture of colors and textures and times and places and, of course, those who and things that walk the earth.”

Holmes said he appreciates the opportunity to show his artwork at the Johnson Center for the Arts and, hopefully, will have opportunities to do more shows and network with other artists and to be more expressive in more ways with ideas and images that are yet to come.

The Johnson Center for the Arts is open from 10 a.m. until 5 p.m. Monday through Friday. Admission is free.