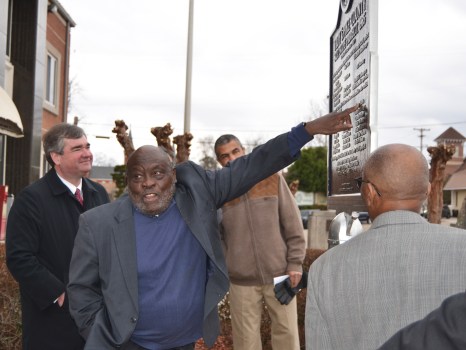 SCOPE50 President Rev. John Reynolds points out a name on the marker as Troy Mayor Jason Reeves, Pike County Commissioner Homer Wright and others look on. (Photos by Josh Boutwell) 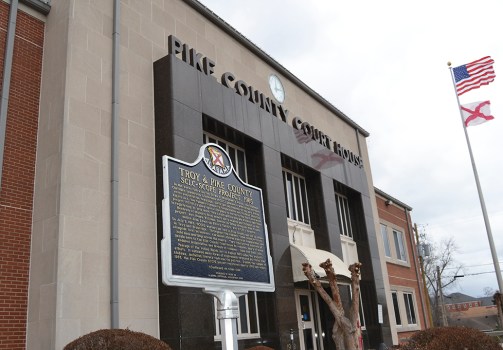 A historical marker honoring those that helped to register African Americans in Pike County to vote has been placed outside of the Pike County Courthouse, where people registered to vote. 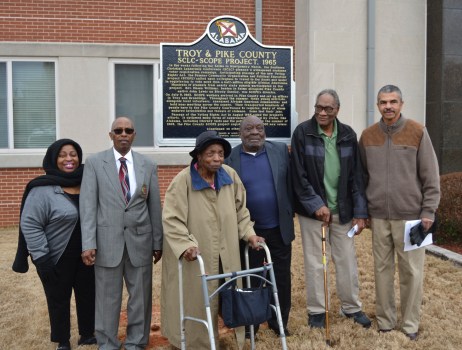 The historical marker was dedicated outside of the courthouse on Jan. 13 with members of SCLC-SCOPE in attendance. 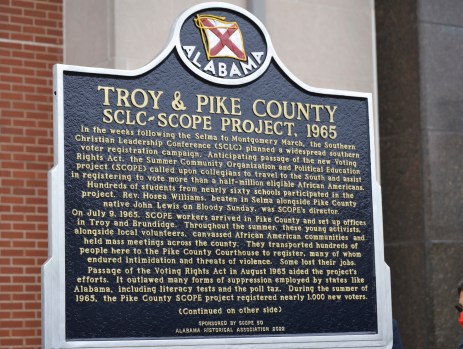 The historical marker was a three-year project. (Photos by Josh Boutwell)

On Friday, Jan. 13, a dedication was held at the Pike County Courthouse in Troy to unveil a historical marker that honors those that served the SCLC-SCOPE Project in 1965, a quest to register African Americans to vote.

In 1965, African Americans that wanted to register to vote had to pass a literacy test – that was infamously difficult to pass – and pay a “poll tax.” The Voting Rights Act of 1965’s aim was to do away with these restrictions.

In the lead up to the Voting Rights Act of 1965, the Southern Christian Leadership Council (SCLC) planned a widespread voter registration campaign in the South. As a result, the Summer Community Organization and Political Education (SCOPE) project was born and in July of 1965 SCOPE workers arrived in Pike County to set up offices in Troy and Brundidge. 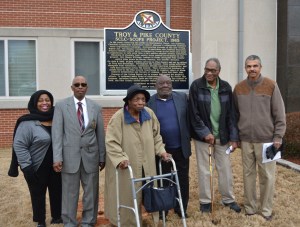 The historical marker was dedicated outside of the courthouse on Jan. 13 with members of SCLC-SCOPE in attendance.

“I was in a summer program that Tuskegee University was having and I was also a janitor at Troy University,” Reynolds recalled. “I had just bought a ’56 Chevrolet and it was cool. One day I was just cruising up the street, getting ready for work, and I saw this white guy talking to this black woman and there was just something about his body language that made me stop.

“I waited until the conversation was over and I walked up to him and said, ‘Are you a civil rights worker?’ Fortunately for me, he said he was, because had it been someone else I probably wouldn’t be here today.”

Reynolds went on to not only volunteer with Pike County SCOPE but he would eventually work with Dr. Martin Luther King as a field officer with the SCLC.

Fellow Pike County SCOPE volunteers like Dr. Eddie Warren – the son of Johnnie Mae Warren – along with Elaine Warren and Charles Stringer were on hand at the dedication. During the summer of 1965, Pike County SCOPE registered nearly 1,000 new voters. SCOPE members helped transport many of those people to the Pike County Courthouse to register, many of whom suffered intimidation, threats of violence and the threat of losing ones job.

Reeves’ cousin Ben Reeves was Pike County’s Probate Judge during the summer of 1965 and aided with the SCOPE project.

“I appreciate everything that was done to move our country in the direction that Dr. King said where we would try reflect the words of our creed,” Reeves said. “So many people gave so much and it’s only fitting that it be commemorated in front of this courthouse.” 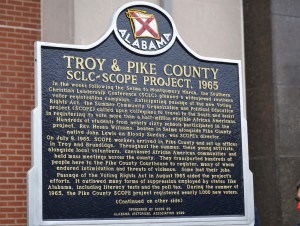 The historical marker was a three-year project. (Photos by Josh Boutwell)

Boyd was a student at Alabama State University during the Civil Rights Movement, when she decided to join the movement.

“Being a drum major for justice is not easy. It is very, very hard because we can’t please everybody,” Body said. “Voting is something that is a privilege and something that people died for, but most of all voting can be an echo of your rights.

“When I was at school at Alabama State, my grand mamma was having a fit. ‘Do not get out there and march, that’s not your business,’ she said to me, but it was my business and I did. I got tired of every time I caught the bus in Brundidge I had to go to the back of the bus and if there wasn’t a seat in the back of the bus, I had to stand all the way to Montgomery. I had to bypass Troy State University because, at the time, they would not admit people of my color. (These types of things) led to the Voting Rights (Act) and something I really appreciate.”

Leon Gutherz’s son, Steve Gutherz, originally planned to be in attendance at the dedication to speak but an illness caused him to miss it. He sent a letter with a statement, however.

“My father told me that his experience in Troy was the greatest joy and most fulfilling experience of his life,” the letter stated. “My father told me how he would speak at black churches around the county encouraging people to register to vote, how important that right to vote was and how it changed lives.”

Steve Gutherz recalled a story that his father told him about a speech that he gave that still sticks with him to this day.

“As he began to speak, he noticed a mother holding an infant in the front of the church and an inspiration came to him,” Steve Gutherz recalled. “He stepped down from the podium and grabbed the baby, holding her up to the congregation, and he declared, ‘This is why we are fighting, this is our future.’

“Well, the future is now and though there has been many positive changes, the right to vote remains vulnerable. My message, for myself and all of you, is that we cannot become complement. The struggle continues and we must do all that we can to preserve the essence of democracy in America; the right to vote.” 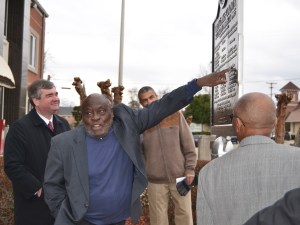 SCOPE50 President Rev. John Reynolds points out a name on the marker as Troy Mayor Jason Reeves, Pike County Commissioner Homer Wright and others look on. (Photos by Josh Boutwell)

Reynolds – who said that Leon Gutherz was like a father to him – remembered the day that he heard the Civil Rights Act had passed and said it made him think about his grandmother.

“My grandmother could not go and eat and have dinner in Troy. She couldn’t go to the movies unless she went upstairs,” Reynolds emphasized. “In 1964, I said to myself, ‘You have to do something.’ On the radio, they announced that the Civil Rights Act had passed.

“There used to be a pool hall on the next corner (in Downtown Troy) that I worked at. I got up and said, ‘I’m going to lunch and I’m not going to Love Street.’ That’s where the black establishment was, on Love Street. I said, ‘I’m going to Byrd Drug Store.’ I was the first black commanding to be served at Byrd Drug Store. Today, it tickles me when I walk in there – like I did this morning – and see a couple of black women in there drinking coffee or eating.”

Reynolds said that he believes life is about change, change like was seen following the Civil Rights Act and Voting Rights Act.

“Folks have to stand up, life is not just about you,” he said. “Life is about what you do with your life. It’s about serving folks. I’m still about making change.

“I’m the national president of SCOPE50 and I will be about change until God calls me home. It’s about serving and giving to someone else.”

The historical marker, which was a three-year long project, honoring those that served with Pike County’s SCOPE Project sits outside of the Pike County Courthouse were the names and memories of those that helped register African Americans in Pike County to vote will continue to live on.