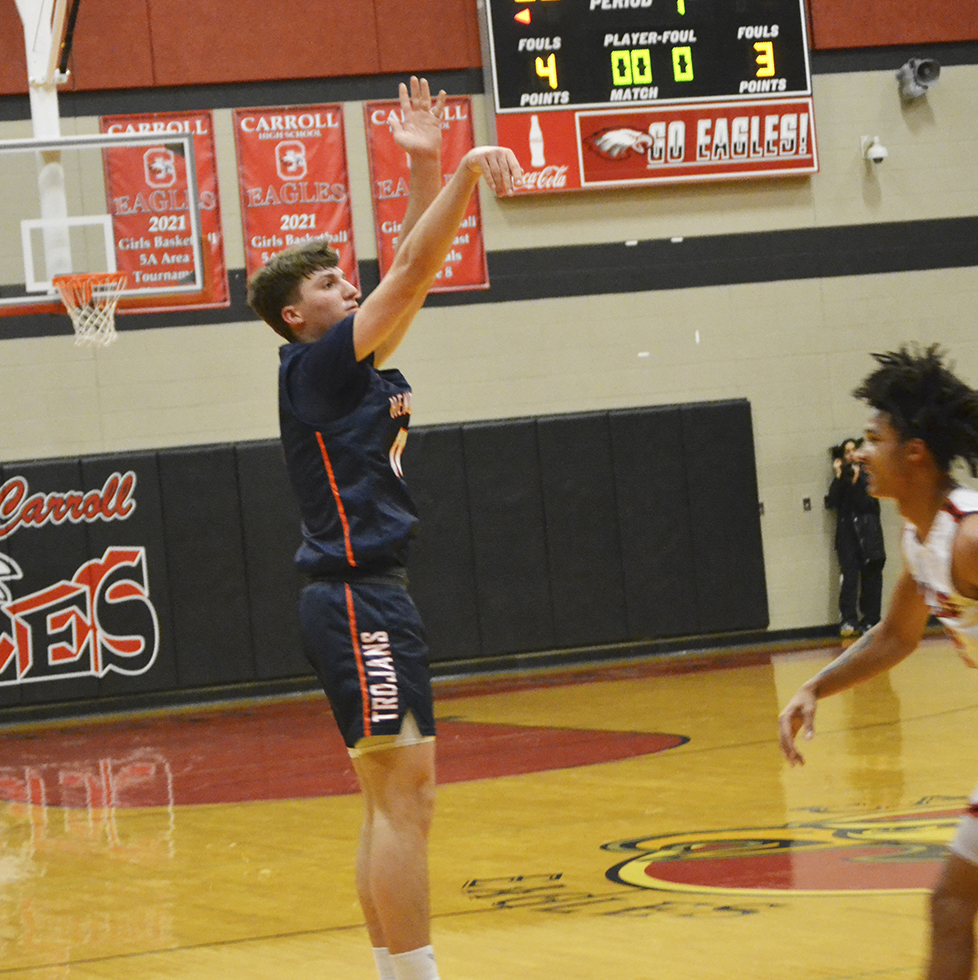 The Trojans wasted no time jumping on Carroll as they stormed out to a 17-1 lead before Carroll finally connected on its first field goal. Charles Henderson led 22-7 going into the second quarter as senior Austin Cross knocked down four three-pointers in the opening period.

Carroll came storming back in the second quarter, however, cutting the lead to 33-28 at halftime. In the third quarter, Carroll managed to cut the lead down to under seven points twice. CHHS still maintained a 54-44 lead going into the final period, though.

Carroll went on a 7-0 run to open the fourth quarter to cut Charles Henderson’s lead to 54-51 as the Eagle crowd made the gym at Carroll High School rumble. Charles Henderson had enough of the comeback attempt, however, and went on a 10-0 run with both Jayden Spearman and Austin Cross knocking down threes during that stretch.

Cross finished with a game-high 32 points, including seven threes, while Jywon Boyd added 15 points and Spearman scored 12 points. The Trojans knocked down a total of 13 three-pointers in the win. Carroll was led by Zavier Womack with 19 points. 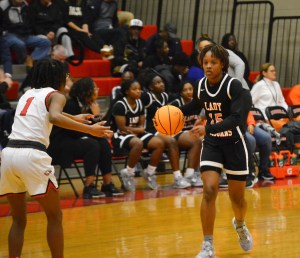 KK Hobdy (15) led Charles Henderson with 19 points in a loss to Carroll. (Photos by Josh Boutwell)

With just over two minutes left, the score remained tied 39-39, but an 8-0 run from Carroll gave the Lady Eagles a 47-39 lead with 20 seconds remaining. Lady Trojan KK Hobdy drilled a desperation three with just five seconds left to cut the lead back down to 47-42 but Carroll was able to run out the clock and secure the win.

The Charles Henderson boys JV team also picked up a 51-33 win over Carroll with Cody Cross and Cartavian Burney scoring nine points each.

Also in Tuesday action, the Pike County Bulldogs and Lady Bulldogs picked up Class 3A, Area 4 wins over Daleville at home. The Bulldogs secured a 58-55 win off 20 points from Markelis Hobdy. Chamarion Brown added 19 points in the win, as well.

The Lady Dawgs also dominated their way to a 66-20 win over Daleville, as well. The Lady Bulldogs jumped out to a 22-4 lead in the first quarter and built the lead to 38-9 at halftime. Daleville finally surpassed double digits in scoring in the third quarter but it wasn’t enough as Pike County still outscored Luverne 28-11 in the second half, including a 17-1 edge in the fourth quarter.

Pike Liberal Arts lost its Class 2A, Area 4 game with Luverne by a score of 52-19 on Tuesday, as well. Will Rice led PLAS with eight points in the loss.