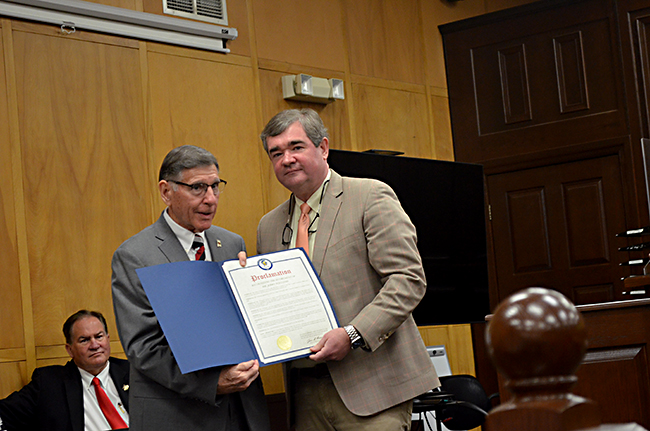 Williams has served Pike County for 40 years and investigated 5,000 deaths

Pike County Sheriff Russell Thomas’ opening remark that he was not “dying to see Williams” brought laughter to the gathering. But, Thomas quickly turned seriously appreciative of the service that Williams has provided for Pike County for four decades.

“I have been blessed to work with Jerry Williams. He is the ultimate professional,” Thomas said. “God puts people in positions to make a difference. Jerry Williams has made a positive difference in many lives.”

Thomas said it takes a special person to tell a family that their 18-year-old son has died in car crash. “Jerry Williams knew all the right things to say. I don’t know of anyone who could handle the job of coroner better than Jerry Williams.”

Troy Mayor Jason A. Reeves said, too, that Jerry Williams has a Christian and loving heart that is essential for being with people on the worst days of their lives.

Reeves presented a proclamation honoring Williams for his long service to the people of Pike County.

Tom Anderson, Pike County District Attorney’s Office, said Williams has the ability to show compassion during times of great anguish and distress. To do so, requires big shoes for any man. Williams has “filled big shoes and offered strong and caring shoulders.”

Pike County Commission Chairman, Robin Sullivan said it has been an honor and privilege to have had Williams serve Pike County as its coroner for four decades.

“Jerry Williams is dedicated public servant,” Sullivan said. “He has served Pike County with a high level of integrity. His willingness to help others and dedication will be long remembered.”

“I never had anyone complain to me about the job that Jerry Williams was doing,” Booth said. “Jerry was, and is, a special person.

Jennifer Colley Ventress, who replaces Williams as Pike County coroner, said her prayer is that she can emulate the service that Williams’ has provided.

“I will strive to be as much like Jerry as I can in service to the community,” she said.

Williams expressed great appreciation to those who have been with him through the years. He expressed thanks for the guidance and support of each and every one and for the determination to do a job until it’s done and done right.

He expressed his love of and appreciation to his wife, Mary Ida Wilson Williams, for her commitment to him and to the work he did for the past 40 years.

“The phone woke Mary Ida up in the middle of the night just like it did me,” he said. “I thank her for all the sacrifices she has made. For both of us, this has been an exercise of faith, not a test of faith, an exercise. We are thankful for these past 40 years and all those along this journey.”