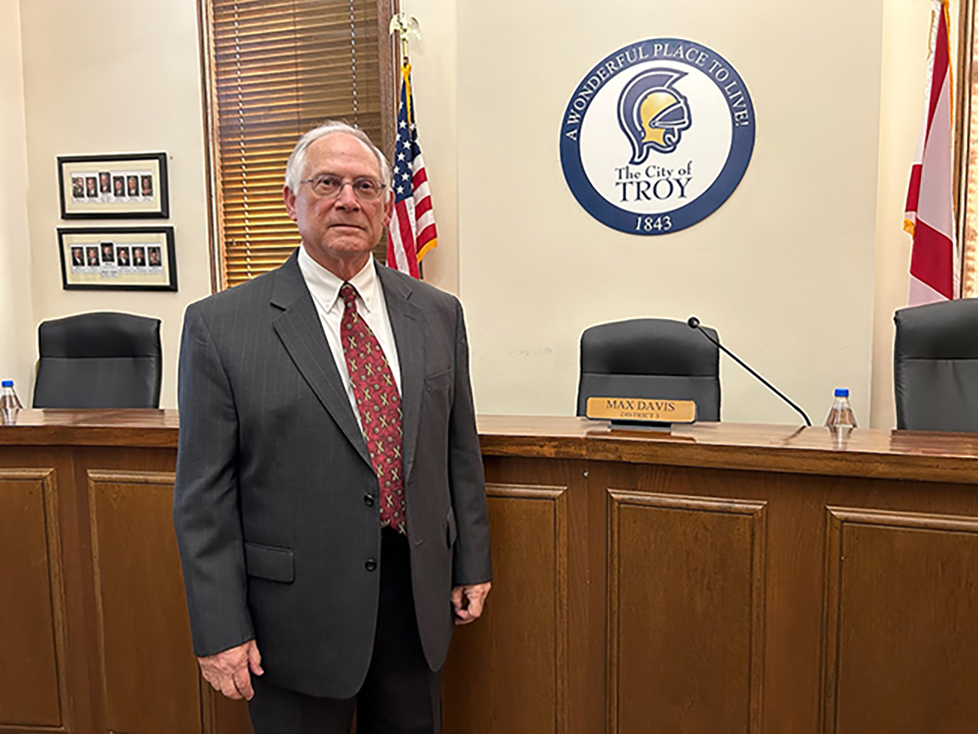 Max Davis, was sworn in as The Troy City Council councilmember for District 3 on Monday afternoon. Davis was appointed by Gov. Kay Ivey to replace Marcus Paramore, who was elected to the Alabama House of Representatives.

On Monday, Jan. 9, 2023, Max Davis, of Troy, received a letter from Alabama Gov. Kay Ivey notifying him that she has appointed him to the Troy City Council, effective immediately.

Gov. Ivey said Davis will serve as a representative of the Third District and will serve the remainder of term vacated by Marcus Paramore.

“As one of my appointees, you will be making important decisions that will directly affect the citizens of Alabama,” the governor said. “I have made honesty and integrity a priority in my administration and I know that you will embody these two virtues while serving the people of Alabama.”

Gov. Ivey further asked Davis to plan to attend all meetings within reason, be a good steward of the taxpayers’ money and work in his position to instill trust in state government.

“The responsibility that comes with this appointment is not to be taken lightly,” Ivey said. “I trust that you will rise to the occasion and set a standard for others to follow.”

The governor expressed appreciation to Davis for serving on the Troy City Council and said that she is confident that he will render valuable service to the citizens of Troy and of Alabama.

Davis is not only familiar to his hometown, Troy, but to all Pike County.  He spent most of his career at South Alabama Electric Cooperative, with 34 years as general manager. During that time, he served on the Pike County Economic Development Board and the Pike County Chamber of Commerce.

However, Davis said city government is new to him.

“Gov. Kay Ivey appointed me on Monday, I was sworn in and attended the Troy City Council meeting that night,” Davis said. “I never dreamed I would ever be asked to serve in this kind of capacity or be appointed to a position as important.

“This has been a most humbling experience. I am blessed to have this opportunity to represent District 3 on the Troy City Council. I never thought I would be part of making decisions that would affect the City of Troy now and in the near future. Yes, I am humbled.”

Davis said Gov. Ivey appointed him to complete the term left vacant when Marcus Paramore was elected District 89 representative in the Alabama House of Representatives.

“Marcus is a friend and he has done a great job on the council,” Davis said. “He has served as council president, so I have some big shoes to try to fill. I hope that I can live up to just a little of the big that Marcus did.”

Davis said he looks forward to being a part of keeping the City of Troy moving forward and to the financial success of the City of Troy as it continues in the position of growth and quality life issues.

“Again, I am humbled to have been appointed by Governor Ivey to represent District 3 on the Troy City Council and I am looking forward to the very positive opportunities before our city,” Davis said.