Another Trojan signs with the XFL 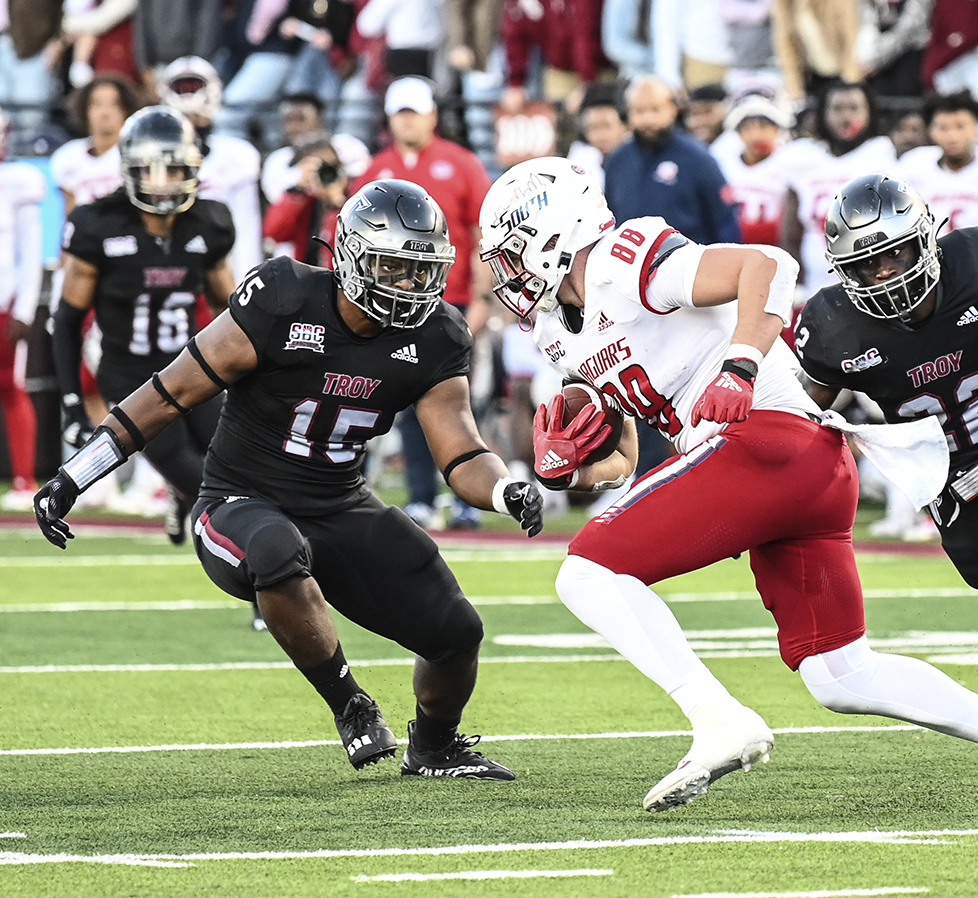 This past weekend, former Troy University linebacker Jordan Anthony signed with the XFL, making him the fifth former Trojan to sign with the league.

Anthony was assigned to the San Antonio Brahmas, which are making their debut in the XFL this season. Anthony is a Maryland native that started his college career at Michigan, where he tallied 14 career tackles in two seasons with the Wolverines. Jordan transferred to Troy for the 2020 season but was forced to sit out due to NCAA rules. In 2021, Jordan played in all 12 games and totaled 35 tackles, one fumble recovery and one tackle-for-loss during the season.

Jordan will be joined in the XFL by quarterback Brandon Silvers, receiver Damion Willis, offensive tackle Antonio Garcia and defensive tackle Trevon Sanders. Silvers will play for the Houston Roughnecks, Willis for the Seattle Sea Dragons, Garcia for the Vegas Vipers and Sanders for the Orlando Guardians.

This will be the second stint in the XFL for both Silvers and Sanders. Silvers played for Seattle during the 2020 XFL season, where he threw for 539 yards and six touchdowns before the season came to an end due to the COVID-19 pandemic. Silvers also played for the Memphis Express in the Alliance of American Football (AAF) in 2019. He threw for 799 yards and four touchdowns before that league folded.

Sanders played for the Los Angeles Wildcats of the XFL in 2020, where he tallied five tackles before the league ceased operations. Since that time, he has become a police officer in South Carolina.

This will be Willis’ first taste of spring football as he played for numerous teams in the NFL, including the Cincinnati Bengals where he started twice and caught nine passes for 82 yards in those games. Willis currently serves as receivers coach at Holmes Community College.

Garcia was originally selected in the third round of the 2017 NFL Draft by the New England Patriots but a medical condition caused him to lose 40 pounds, which put a halt to his pro career. He’s since spent time on the practice rosters for the Jets, Colts and Dolphins and played for the Saskatchewan Roughriders of the Canadian Football League (CFL) in 2021.

The XFL will begin its 2023 season on Feb. 18 when Garcia’s Vipers played the Arlington Renegades and Sanders’ Guardians play Silvers and the Roughnecks. The XFL has an agreement with Disney that will see all XFL games broadcast on either ABC, ESPN, ESPN2 or FX.