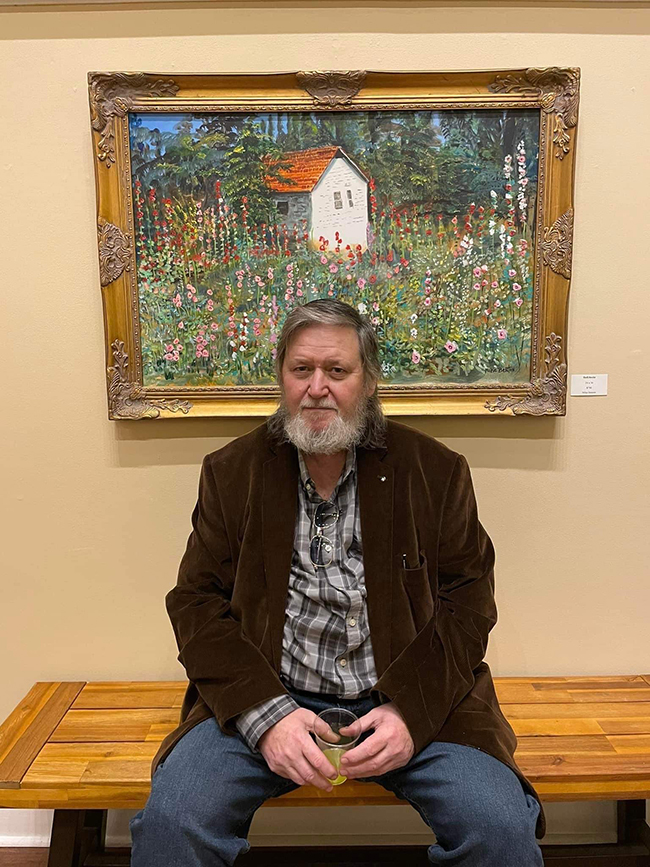 Jaine Treadwell | The Messenger Mike Benton was born in Troy, Alabama, raised in Union Springs.  Currently Mike enjoys painting with his students at Pike Liberal Arts school. He appeared at the TroyFest art festival where he won the Graphic Artist award.

The Mike Benton Art Exhibit at the Johnson Center for the Arts has been held over by popular demand.

Benton is a Pike County resident and primarily self-taught artist. He paints what he knows and what interests him and he has a lot of interests.

Mike’s artwork resonates with “just about everybody,” perhaps everybody, Campbell said.

“Whatever your interests are, there’s a good chance that Mike Benton has painted something seemingly just for you,” Campbell said. “A gentleman came in the Johnson Center the other and said excitedly surprised, ‘That’s Festus!’ He said he is a fan of television’s popular, ‘Gunsmoke’ and that he has watched just about every episode of the longest-running shoot ‘em up that was made. Mike also has paintings of Miss Kitty, Doc and Marshal Matt Dillon. Anybody that enjoys ‘Gunsmoke’ will find Mike’s exhibit interesting.”

Benton, said, as a child, he was introduced to art while watching television’s “how to” shows like John Nagy. Any paper with a clean surface soon became a place for drawing. In school, Benton, kept drawing murals and painting tigers for the football team. He has attended classes by other artists but mostly had to teach himself. He enjoys working with other artists and with art students.

After years of devoting his talent to music and playing with various bands, Benton said his daughter, Amanda Smothers, encouraged him to get into art again.

“I started drawing with graphite, charcoal and pastels and started watching videos of famous artists and instructional programs to learn everything I could about painting with acrylic and oil paints,” Benton said.

He also became interested in watercolor and clay sculpture and his interest generated more and more enthusiasm for the new mediums.

Benton’s work has been published on the covers of seven novels and has been displayed in studios, at art galleries and in magazines.

Mike Benton is also a singer and musician and often performs in the local area with his daughter, Amanda Smothers; granddaughters, Abby Porter and Lily, and Hugh Atkins. Mike has taught art classes in and around the Bullock and Pike area. He teaches advanced art at Pike Liberal Arts School.

“God gave me talents and guidance,” he said. “I love art and music. I’ll get by with a little help from my friends.”

The JCA is open from 10 a.m. until 5 p.m. Monday through Friday. Admission is free.