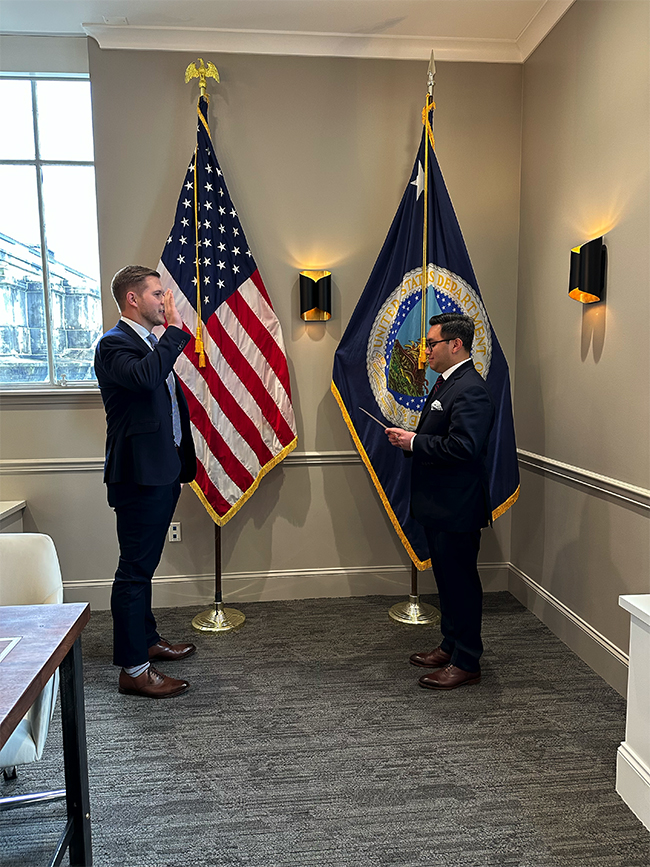 Contributed Photo Wesley B. Swanzy was sworn in as Chief of Staff to the Chief Financial Officer at the United States Department of Agriculture.

On January 3, President Joe Biden appointed Wesley B. Swanzy, a native of Goshen and Troy University alumnus, as the Chief of Staff to the Chief Financial Officer (CFO) at the United States Department of Agriculture (USDA).

Swanzy holds a B.S. in International Relations and Leadership from Troy University and an M.B.A. in Finance and Management from Columbia University Business School.

He previously served as a financial professional working on Wall Street for UBS Financial Services, where he specialized in Hedge Fund Business and Risk Management.

In this appointed position, Swanzy serves as the Senior Confidential Advisor to the CFO. He leads strategic initiatives to ensure the Agriculture Secretary’s priorities are effectively and efficiently executed throughout Department operations.

Swanzy said he was both humbled and honored by President Biden’s appointment.

“I’m still in awe of it all,” Swanzy said. “I have to pinch myself to be sure it’s real. To walk into work and look out the window and see our national monuments is inspiring. It is something I could never have imagined. I am in awe of this amazing opportunity. I can’t express what it means to me.”

Swanzy said, once he was sworn in, he was up and running.

As a former active-duty, Air Force Finance Officer and current reservist, Swanzy has spent more than 10 years leading airman in South Korea, the Middle East, and the Pentagon.