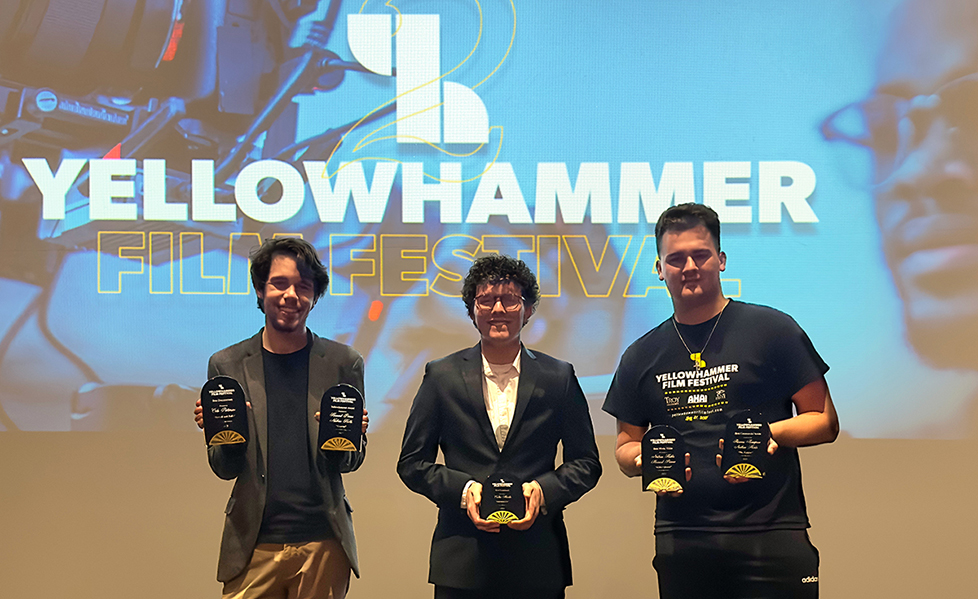 Troy University design students recently competed against top film schools from across the country in the second annual YellowHammer Film Festival, held both virtually and in person at the Trojan Center Theatre on the Troy Campus on Saturday, Dec. 17.

While the Best Film of the Year award in the college division went to “The Trobie,” a fantasy adventure film by student filmmaker Phnley Joel from Lipscomb University, Troy University’s students earned seven awards, including The YellowHammer Award for “Unseen” by Howard Purvee and Nathan Hobbs.

“Although it was exhausting, it was so worth it, and I’m very happy with all the work we put into this finally paying off,” Hobbs said. “I am so ready to do it again and get back to creating. Thank you so much to all of the festival organizers for making this happen and for letting us be a part of it.”

“I was very emotional and brought to tears when I got to watch my work screen for all the filmmakers and then ultimately hear my name get called with Nathan’s for Best Commercial Series,” Thompson said.

Cole Patterson was also awarded Best Documentary for “Russell and Ruin” and was named an Honorable Mention in the Cinematography, Music Video and Motion categories.

The 11-hour film festival consisted of workshops, roundtables and film screenings. Presentations were given by all of the judges, including Dr. Will Napier from Southern New Hampshire University; Ty Primosch from Netflix; KJ Mathieson from the University of Central Florida; Eric Flagg and Isaac Brown of JellyFish Smack Studios; and Theo Love of HBO and Netflix.

The festival received nearly 250 entries in just its second year from dozens of high schools and colleges across the country, Troy University design professor and festival creator Chris Stagl said.

“This more than doubles the submissions from last year,” he said. “Along with all of the films, we were able to expand our footprint from being solely an online festival to also providing the filmmakers, family and friends a place to come watch the entire days’ events in the Trojan Center Theater.”

The YellowHammer Film Festival was made possible by partnerships with ASCA, The Alabama Film Office, 1st Place Trophies and The Sidewalk Film Festival.

The YellowHammer Film Festival will return in 2023.