Troy knocks off Old Dominion for the first time 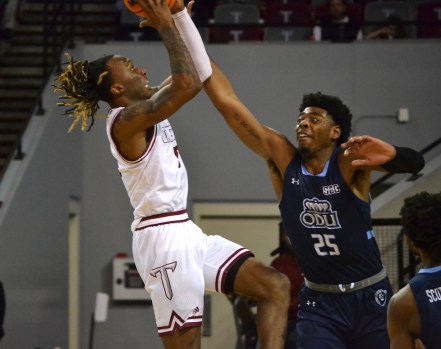 Christyon Eugene (5) drives to the basket against Old Dominion. (Photo by Josh Boutwell)

On Thursday, the Troy Trojans (10-6, 2-1) men’s basketball team picked up a 78-71 win over of the Old Dominion Monarchs in the first matchup between the two schools ever.

The win not only marked Troy’s first win in school history over Old Dominion on the hardwood but it’s also Troy’s second Sun Belt Conference win of the season. Troy is now on a two-game conference winning streak after starting the conference schedule off with a loss.

Troy led by as many as 13 points in the first half and went on a 13-1 run at one point as Nelson Phillips scored 13 points in the opening half. ODU went on a 7-0 run, all free throws, to end the half. Troy was called for a foul on a desperation half-court shot at the end of the half that tightened the Trojan lead to 38-32 at halftime. 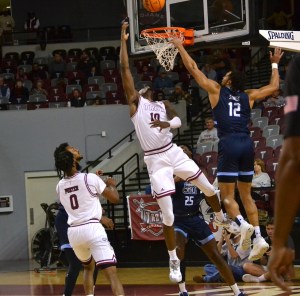 Troy led for 10 or more points for the majority of the second half but midway through the half, the Monarchs went on a 13-1 run and were able to come within two points multiple times in the final three minutes.

With just a minute left, and Troy leading 72-68, Phillips stole the ball from a Monarch and slammed home an emphatic dunk to put Troy up 74-68 with 46 seconds left.

While Troy lost the rebound battle to ODU 48-38, the Trojans forced 15 turnovers and held the Monarchs to just 35 percent shooting from the field. Troy shot 41 percent from the field and outscored Old Dominion 28-20 in the paint.

Phillips led the way for Troy with 17 points, six rebounds and two steals, while both Aamer Muhammad and Christyon Eugene scored 14 points each before they fouled out. Muhammad also had three steals and three assists, while Eugene had two steals. Zay Williams scored 13 points, grabbed seven rebounds and blocked four shots, as well. Tyreek Grayson-Scott led ODU with 31 points.

Troy is back at home this Saturday, Jan. 7, for another conference game with Arkansas State at 4 p.m.