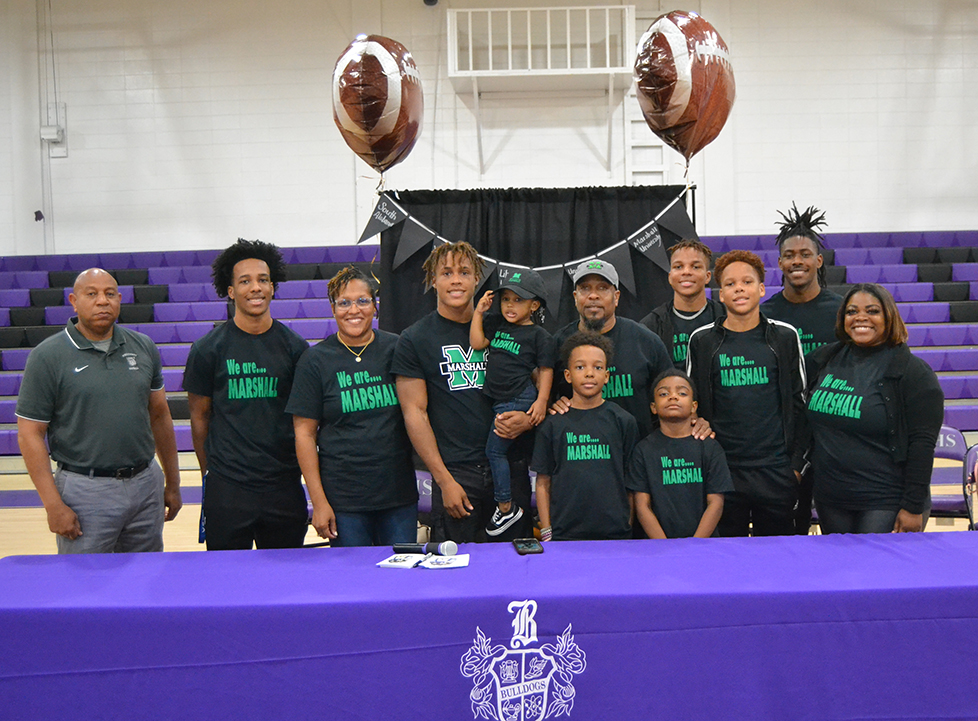 On Wednesday, Jan. 4, Pike County High School senior athlete Ian Foster announced that he has signed his letter-of-intent to play college football at the University of Marshall.

Foster had scholarship offers from all over the country but narrowed his college destination down to Marshall, Vanderbilt, South Alabama, Chattanooga and Liberty.

“When I went to visit (Marshall) their team bond there was the same as we have here. It just felt like home when I went there, I fit in,” Foster said of his decision. “I’m going to play a lot over there and I think I’ll be a big player for them and can help them out a lot.

“Me and (Marshall Defensive Backs) Coach (Chevis) Jackson’s relationship is a lot like me and (Pike County) Coach (Mark) Hurt’s relationship. That played a big role in my decision.”

Foster was surrounded by numerous family members, teammates and members of the Brundidge community as he announced his decision. Each of Foster’s head coaches from throughout his youth and high school career also spoke about him.

“He made my life really, really easy as a coach,” former Pike Liberal Arts Coach Mario White said. “I would yell at him that I wasn’t getting him ready for high school, he was getting ready for something greater.

“I tell people all the time that he’s got the talent to play on Sundays (in the NFL) and I stand by that. Wherever he goes, he’ll do great things and I know his future is bright.”

“He’s been a great player for us and a great leader for the team,” Hurt said. “He did an outstanding job. When I got the job, one of the older ladies in the community from back in the day told me, ‘Coach, we’re not on the map anymore and we just need to get back on the map in terms of football.’

“I told her we would get back on the map and we have to have players like (Foster) – and the rest of the (his teammates) sitting in the stands right now – to get there.”

Foster helped Pike Lib win an AISA State Championship in 2021 and he earned AISA All-State honors in the process. He earned 61 tackles and seven interceptions at Pike Lib in 2021. Foster repeated as a member of the All-State team this season, this time in Class 3A, with Pike County as Foster was one of the leaders of Pike County’s resurgence to the 3A Playoffs. Foster is a finalist for the Class 3A Back of the Year, as well.

While Foster has been a “do everything” athlete in high school, playing positions all over the field in all three phases of the game, he’ll be playing cornerback at Marshall. 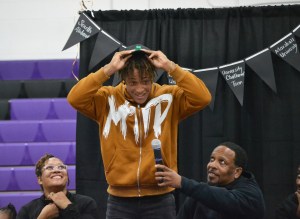 Ian Foster announced his decision to sign with Marshall at a ceremony at PCHS.

“I just played safety on defense (this season) because we needed help on the back end but I’m used to playing corner,” Foster said. “It won’t be anything knew for me.”

Foster will have a built-in family and conference rivalry in college as his brother Jaidyn Wilson is a receiver at Troy. Foster said that competition will fuel both of them in the future.

“We’ve been talking about that since I committed,” Foster said with a smile. “We’ve talked about it a lot. When I come back (home), I’m going to make it personal. We’re going to work hard together in the summer, so that when we see each other (on the field) it won’t be anything new.”

Foster, who plans to major in exercise science, has some lofty goals for his college career.

“I want to be one of the top five (defensive backs) in the Sun Belt,” Foster continued. “I want to be a Top 15 defensive back in the nation before I graduate, I want to set some records and I want to get the most picks (on the team) my first years as a freshman. I want to be the best freshman they’ve ever had.”

While Foster’s future goals are ahead of him, the multi-sport athlete will now set his sights back to the basketball court in the coming weeks.