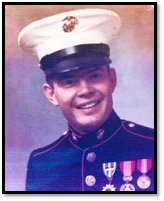 Paul Johnson, resident of Grady, Alabama passed away on Thursday, December 22, 2022 at the age of 73.  Funeral services were held at 1:00pm on Wednesday, December 28, 2022, with visitation one hour prior at Green Hills Funeral Home.  Burial followed at Hills Chapel Cemetery in Grady.  Mr. Johnson enlisted in the Marines when he was 17 years old and served 2 tours in the Vietnam War.  He received a purple heart for his service to the United States.  He enjoyed fishing and was an outstanding man who always was true to his word.  He will be missed by all who knew him.  Loving survivors include his wife, Brenda K. Johnson; children, Kaye Galvan, Keith Johnson; 9 grandchildren; 9 great grandchildren; brother, David Johnson; sisters, Charlotte Butler and Shirley Rice; and brother-in-law, Robert Brackins.  He was preceded in death by his daughter, Paula Marie Johnson Davis; parents, Shelby & Ruby Johnson; and several siblings.