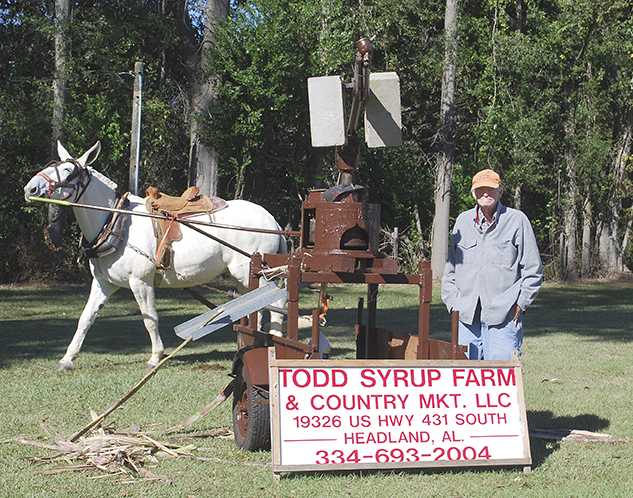 Photos by Jaine Treadwell Joe Todd is a fifth-generation syrup maker. He founded Todd Farms in Dothan and his family has been making syrup since 1864.

He wears that title as a badge of honor. And, so, he should.

Joe Todd is one of a few remaining syrup makers in an area where, not so long ago, there was a syrup kettle at most every home-place. He is the founder of Todd Farms in Dothan but his roots, his heritage, in syrup making goes back 150 years and through his heritage in the Tennille community in southeast Pike County.

“When I was a young man, I asked my dad how long the Todd family had been making syrup and he had to think awhile,” Todd said. “He said that in December 1863, Gov. Down of Georgia issued the ‘cradle to the grave’ conscription order. It included all males between the ages 16 to 60. My great-grandfather,  Elias H. ‘Eli’ Todd, was 51 years old and a farmer in the north end of Early County, Georgia. He and his brother, Samuel Todd, reported for duty to Ft. Gaines in January 1864.

Eli Todd fought Sherman’s army in the battle at Jonesboro, August 31, 1864. He was released in late September after Savannah fell to Sherman.

“My dad said that his dad, Billy, then age 11, and his grandfather, Thomas Todd, were stripping cane in late October 1864, when they saw Eli Todd walking home,” Joe Todd said. “The three of them made syrup in the fall of 1864. That was more than 150 years ago. That’s a long time to be making syrup.”

Todd said his earliest memories of syrup making were before he started school in the fall of 1940.

“The school bus would stop at the cane mill to let my two older brothers off and the children on the bus would get off and come to the mill,” Todd said. “They would use an old tin dipper hanging on the side of the mill to drink cane juice.”

Todd said, when sugar rationing started at the beginning of World War II, his mom and dad had a vision that the syrup would be a valuable commodity as a sugar substitute.

I”n September, 1942, my dad and my older brother, Max, took the back seat out of our 1928 Model A Ford and headed to Columbus, Georgia, to buy a new cane mill,” Todd said. “Columbus Foundry and Southern Plow  Foundry in Columbus didn’t have a single mill. But, Golden Foundry in Columbus had one mill, a Model 12, a big mule mill with two 12-inch diameter rollers. They got all the parts in the Model A except the two rollers. Dad hired a neighbor, Frank Robert, who had a pickup to go the next day and get the two rollers.”

Cane syrup proved  very  valuable during the war for cooking down figs to preserves. Whiskey makers made rum and moonshine from can syrup and corn, Todd said.

Todd said his life has been sweetened by cane juice and cane syrup and he holds the memories of grinding cane and making syrup close to his heart.