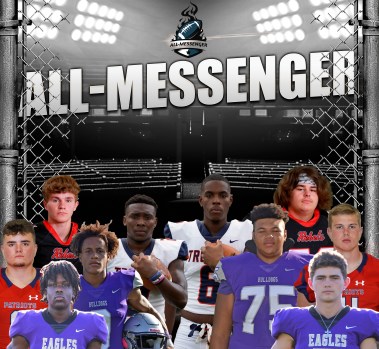 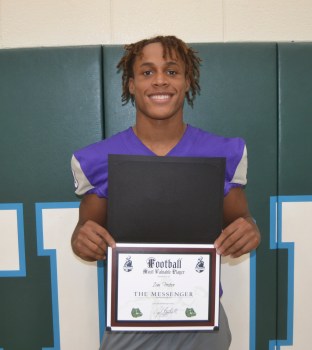 The All-Messenger Most Valuable Player is Ian Foster. 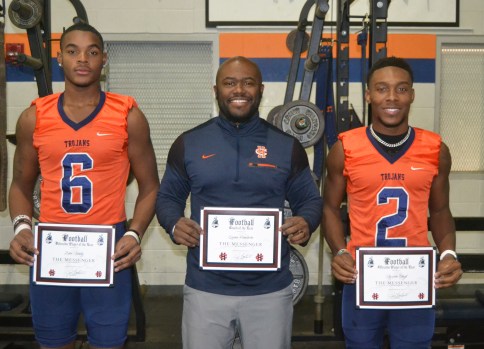 The inaugural All-Messenger Football Team, presented by Troy Bank and Trust, is headlined by a number of All-State representatives and area playmakers.

Nearly all of the football teams in The Messenger’s coverage area saw year-over-year improvements, including historic turnarounds at both Pike County High School and Charles Henderson High School. At Charles Henderson, the Trojans went from a 2-win team in 2021 to finishing with 12 wins and runner-up in Class 5A. Pike County was winless in 2021 and went on to advance all the way to the Class 3A Quarterfinals. While Goshen and Zion Chapel missed out on the playoffs, the Eagles went from just one win in the past two years to a 6-4 record. The Rebels also improved from two wins in 2020 and 2021 combined to three in 2022. Despite coaching and player departures at Pike Lib, the Patriots were able to come away with three wins with one of the youngest teams in the state. 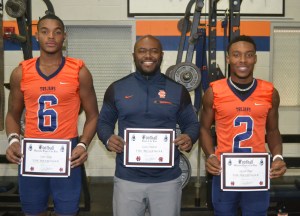 Pike County’s Ian Foster is the All-Messenger Most Valuable Player on the season, while Charles Henderson’s Jywon Boyd is the Offensive Player of the Year and Trojan Zion Grady is the Defensive Player of the Year. It’s not often that two football programs in the same are turned around as starkly as both Pike County and Charles Henderson were this season, making both first-year coach Mark Hurt (Pike County) and second-year coach Quinn Hambrite worthy candidates for Coach of the Year. Hambrite, though, helped guide his Trojans to their first appearance in the Class 5A State Championship – just one season after winning two games – as such is the All-Messenger Coach of the Year.

On the offensive side of the All-Messenger Team, at quarterback is Charles Henderson’s Parker Adams, who threw for 2,580 yards and 28 touchdowns, completing nearly 60 percent of his passes as he guided the Trojan offense. At running back, Goshen junior Jamari McClure was the only player in the area to surpass 1,000 yards rushing. McClure finished the season with 1,173 yards and 16 touchdowns on 121 carries, while also hauling in 12 catches for 354 yards and seven more scores. Pike County’s Nemo Williams also came within arm’s length of 1,000 yards as he tallied 908 yards and seven touchdowns on the ground.

The All-Messenger’s offensive line is represented by Charles Henderson’s Benton Dunn and Connor Jones, Pike Liberal Arts’ Cade Renfroe, Zion Chapel’s Hayden Walden and Pike County’s Joseph Wilkerson and Keith Williams. Dunn led the CHHS offense as the team’s center, as he and Jones helped guide the way for a running game that averaged 150 yards per game and an offense that gained nearly 350 yards per game total. Keith Williams earned a 90 percent grade on offense, tallying 75 pancakes and allowing zero sacks on the season, while Wilkerson boasted an 85 percent grade on the line with 65 pancakes. Renfroe started all 10 games on the offensive line for Pike Lib and was the team’s leading blocker, as well as being a leader on defense. Walden earned an 85.4 percent grade and tallied 10 pancakes and eight knockdowns on the season. 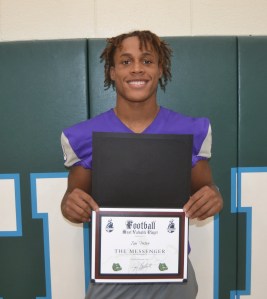 The All-Messenger Most Valuable Player is Ian Foster.

Also at “athlete” are Zion Chapel’s Morgan Sanders and Goshen’s Szemerick Andrews. Sanders finished the season with 43 tackles, seven tackles-for-loss, one sack and one interception. He also led the Rebel offense with 322 passing yards and four touchdowns along with 967 rushing yards and eight touchdowns, while returning 12 kickoffs for 219 yards. Andrews tallied 55 tackles, eight tackles-for-loss, two sacks, two fumble recoveries and an interception return for a touchdown on defense. He also rushed for 878 yards and 11 touchdowns on offense.

Nik Peerson was the area’s leader in both punting and kicking and is the only two-time All-State representative in the area on special teams. Peerson averaged 41 yards per punt this season with a 4.2-secodn hang time. Peerson also converted 12-of-20 field goal attempts with a long of 48 yards, while he was 28-of-38 on PATs.

Foster wasn’t afforded many opportunities on special teams as team’s quickly decided kicking away from him was their best options but when he got his hands on the ball he made the most of it. Foster averaged 22.8 yards per punt return and an eye-popping 57.5 yards per kickoff return. He had just four kickoff returns for 232 yards and two touchdowns along with six punt returns for 137 yards and a touchdown.