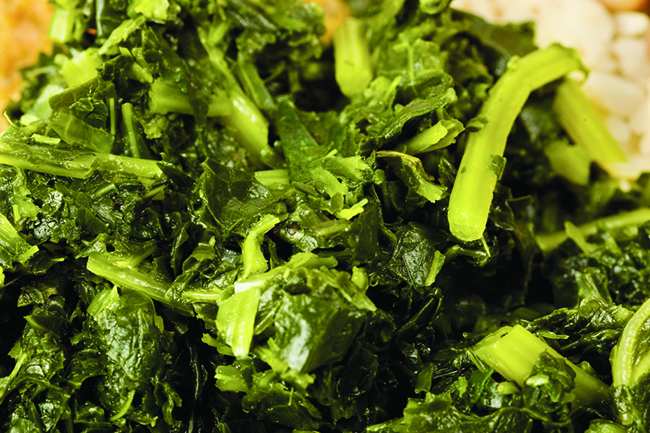 File Photo Eating collard greens on New Year’s is both a tradition and superstition that many people continue each year.

The Christmas season traditionally begins with the “hanging of the greens.”

However, the New Year traditionally begins with the “eating of the greens” especially here in the South.

Just when the tradition of eating turnips or collard greens on New Year’s Day began, no one around is old enough to remember. But, that doesn’t really matter. Just get ready to enjoy the tradition.

“Turnips and collards are popular at most any time of year but, especially, around New Year’s Day because of  tradition and superstition,” Garrett said.

”So, we make sure to have plenty of turnips, collards and black eyed-peas in the store for anybody that wants them and a lot of people will want them.”

And, what would a pot of greens or peas be without seasoning meat.

“Most people cook the greens and peas with hog meat, and most often with hog jowl,” Garrett said, and added laughing. “Some people might not want to know what hog jowl is  but … it’s the cheek of the hog.”

Of course, in year’s past the pig tail got to do the New Year’s Day honors, but, with the reduction of slaughter houses, there’s just not as many pig tails in the turnip pot.”

Garrett said he expects business to be swift and steady in the produce section and the stacks of dry peas to dwindle in a hurry due to tradition … and superstition,

Eating greens means folding money in the pocket during the New Year and black-eyed peas mean a jingle in the pocketbook. The ol’ hog roots forward so that ensures a measure of prosperity in 2023. Some traditionalists cook rice to serve along with other traditional foods. Rice will  guarantee  that those who eat the sticky grain will “stick around” for the New Year.

The Piggly Wiggly is the home of pork sales but Garrett said he leaves the cooking to his mom, Patricia, who admits to being a traditionalist when it comes  to New Year’s Day dining.

“We have it all – turnips, dry peas, pork,” Patricia Garrett said. “It’s what we eat on New Years’ Day, But, she added, laughing, “the pig tail is not in the pot.”

“I like to cook greens with pork but I like a Boston butt. Smoked hog jowl also makes for a nightly good pot of greens.

“I like to cook turnip greens along with what some might call the turnip root,” she added. “I cook both of them together. When they’re done, I take two knives and cut the turnip (roots) in with the greens and that’s might good eating. With cornbread, you can’t eat any better than that.”

However, Garrett did hint that she might add apple dumplings to her New Year’s Day menu. The tradition of that? A sweet tooth throughout 2023.