Remembering ‘Sue Bee’: The Story Of The Nutcracker 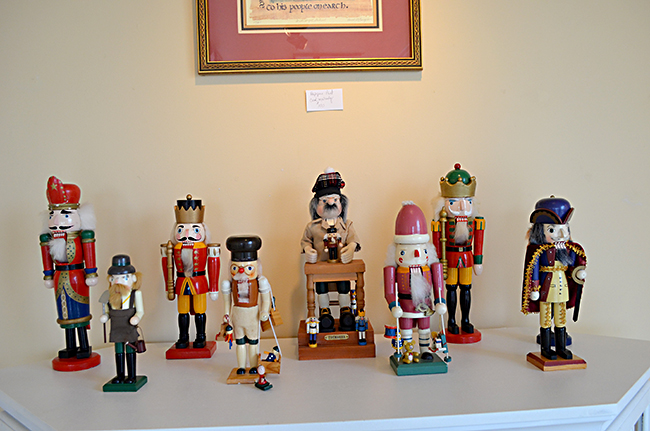 In German tradition, the dolls are symbols of good luck and the frightening away of unfriendly spirits. While nearly all nutcrackers from before the first half of the 20th century are functional, many modern nutcrackers are primarily decorative, and not able to crack nuts. Nutcrackers are also a part of German folklore, serving as protectors of a house.

The late Susan “Sue-Bee” Berry, was a popular and much-loved kindergarten teacher in the Pike County and Troy City school systems. She was also a very gifted artist and a collector of several things including nutcrackers.

Susan Berry loved the colorfulness of the nutcrackers and also the history associated with them. She also enjoyed The Nutcracker ballet and even the opera.

But, most of all, Sue-Bee enjoyed sharing the story of the Nutcrackers with children. At Christmas time, she would gather some of her favorite nutcrackers and take them to the Johnson Center for the Arts for everyone to enjoy. She would also come and read the story of The Nutcracker to the children, many for the first time, and the adults to hear, perhaps, once again, Sue Bee share her enthusiasm for the Christmas Nutcrackers in hopes of passing it along.

When Susan Berry lost her long battle with illness, friends were dedicated to making certain that her Nutcracker collection stayed together so the story of The Nutcracker would continue to be told as Sue Bee would have wanted.

Each year following, at Christmastime, the Nutcrackers are on display at the Johnson Center for the Arts and everyone is invited to come and be a part of the continuing story of The Nutcracker.  Often, there is an opportunity to hear the story of The Nutcracker read aloud by a JCA docent. There are also opportunities to ask question as a way of learning more about the soldier-like dolls with faces of humans or fictitious characters, animals and many other things.

But, Susan Berry would probably say that a nutcracker can be anything imaginable and each could have a story of its own. She would encourage youngsters to be creative, to draw their imagined nutcrackers and give each of them a story.  And, then, share the story of their nutcrackers just as she happily shared the story of The Nutcracker with hundreds, perhaps thousands, of children here at home.