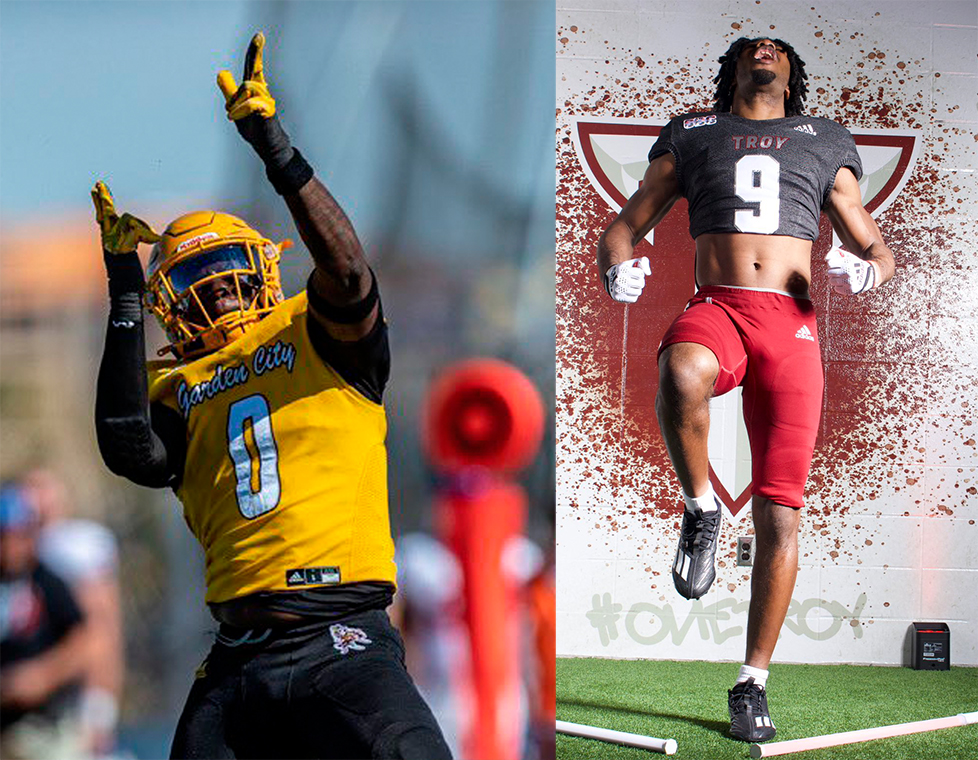 Junior college tranfsers Steve Cattledge Jr. (9) and Raymond Cutts (0) will be two players that could have an immediate impact on Troy next season.

Dec. 21 was the early signing period for college football and it was a big day for the Troy Trojans as 23 players from across the South signed their letters-of-intent to play at Troy.

Troy coach Jon Sumrall confirmed to the media on Wednesday afternoon that Troy had signed a total of 23 players but only announced 19. Sumrall said that the other four players asked for their names to be held back, so that they could have their own signing ceremonies/announcements, some of which will take place in February. Sumrall said that at least one of those names will be released in the coming days.

Of those 19 announced players, five were junior college (JUCO) transfers, one was a four-year school transfer and 13 were high school seniors. Troy signed five from the State of Mississippi, four from Alabama, three from Florida, three from Georgia, two from Tennessee, one from Texas and one from Louisiana.

With a number of veteran Trojan defenders graduating from the 2022 defense, Troy reloaded heavily on that side of the ball, signing 10 players on defense with five at linebacker, including one at the bandit position.

“We’re excited for these 23 guys and the 19 we’re announcing today,” Sumrall said of the class. “We’re worried about the guys we got and not the ones we didn’t get. Those guys we got are family now.

“I think we got some really quality additions that match up to our character and culture of our program. There will also be some more additions in the coming days and weeks, and probably a few more subtractions in the coming weeks, from a roster management standpoint. This is the starting point of what our ’23 roster will look like.”

The pair that will likely be looked at as the headliners of the class includes two of the top JUCO defenders in the country in East Mississippi Community College linebacker Steven Cattledge Jr. and Garden City Community College defensive end Raymond Cutts. Both announced their intentions to transfer to Troy this week and both signed their letters-of-intent in the morning on Wednesday.

Cattledge led the entire country at the JUCO level in tackles with 120 tackles, 21 tackles-for-loss, 10 sacks, three forced fumbles and an interception. He ended the season as a finalist for the Walter Jones Trophy, which goes to the top JUCO player in the country annually. Cattledge also earned All-MACCC honors as a sophomore.

Cutts earned NJCAA First-Team All-American honors this season, registering 58 tackles, 20 tackles-for-loss, 1 sacks and one blocked kick. Cutts started his career at Central Florida before transferring to Garden City in 2020. As a senior in high school, Cutts totaled 125 tackles and 10 sacks.

“I think the (transfer) portal has maybe taken some of the focus off high school recruits, to some extent, but I also think it has maybe allowed for a better caliber of JUCO player to get overlooked,” Sumrall said. “A lot of people get distracted with guys that have been at FBS programs. Raymond Cutt is a JUCO All-American and on video he’s very disruptive.

“Steve Cattledge is long, rangy, athletic and physical. When I was here as an assistant we signed three guys from EMCC that were pivotal to our turnaround. Cattledge is sort of a combination of all three of those guys.”

Troy’s lone four-year college transfer in this signing class, thus far, is former Kentucky receiver Chris Lewis. The 6-foot-4-inch, Pleasant Grove native was a four-star recruit coming out of high school and was one of the top receivers in the country during his high school career. He caught 70 passes for 1,235 yards and 19 touchdowns as a senior.

“I had experience with him out of high school, being a part of his recruitment,” Sumrall said of Lewis. “He has good ball skills and a good frame. He’s a little bit of a build-up runner with long strides. I think we can help him maybe improve his acceleration and he’s a high character kid. I think he has a chance to help us outside similar to how RaJae’ Johnson did this season.”

Of the incoming freshmen, defensive end Deshaun Batiste is a two-time All-State selection at his high school in New Orleans, La., where he recorded 71 tackles and 18 sacks as a senior. Offensive lineman Tyler Bell was an all-state offensive tackle at Lausanne Collegiate School in Memphis, Tenn., this season, as well.

Linebacker Keyshawn Campbell recorded 80 tackles, eight sacks and one interception as the three-star linebacker led his Vero Beach High School (Fla.) this season. Alma Bryant lineman Billy Gilmore is rated as one of the top 75 players in the State of Alabama and he earned Class 7A First-Team All-State honors as a senior.

Stateboro, Ga. running back Jordan Lovett rushed for 1,035 yards and 11 touchdowns as a senior and is also a track star at Statesboro High School. Malaki Pegues earned 30 tackles, 13.5 tackles-for-loss and six sacks as a senior at Oxford High School as he earned All-State honors. Jackson-Olin’s Ty’Quarius Perry earned all-region honors as he tallied 62 tackles, 24.5 tackles-for-loss and 13.5 sacks this season.

Tim Roberson recorded 23 tackles, eight interceptions and 10 pass breakups as a senior at Valdosta High School (Ga.) and is also a track star in high school.

Chris Rodgers starred as both a running back and linebacker at Corinth High School (Miss.) and earned All-State honors and Region Defensive MVP with 109 tackles, 12 tackles-for-loss, three sacks and five forced fumbles. He also rushed for 653 yards and 13 touchdowns.

Memphis, Tenn. native JD Sherrod is the lone quarterback is this class and eh is rated as a Top 90 quarterback by 247Sports. Sherrod threw for 2,131 yards and 24 touchdowns as an All-State player at Briarcrest Christian School.

Jack Tchienchou is rated as one of the top cornerbacks in the entire country and held offers from numerous FBS programs around the country. He earned Region 5-AAAAAA Player of the Year as a junior and senior, totaling 86 tackles, three interceptions and eight pass breakups.

Jackson Worley caught 19 passes for 280 yards and five touchdowns as a senior at The King’s Academy (Fla.) and also stars on the basketball court in high school. Colton Walls has one of the more interesting stories of the Troy signees as he will also play baseball at Troy. His father played football at Troy and his mother is also a Troy graduate. Walls played long snapper, offensive lineman, tight end, receiver and punter at Stanhope-Elmore. He will serve as a long snapper at Troy.

Of Troy’s 19 signees, eight are early enrollees that will begin their college careers at Troy in January and be available for spring practices. Beall, Campbell, Cattledge, Conner, Cutts, Perry, Sherrod and Thompson will all be enrolling in January.

Troy has had some recent movement on the roster in terms of players entering the transfer portal, including 2022 leading receiver Tez Johnson, who announced his decision to leave on Tuesday night.

“I love Tez dearly,” Sumrall said of Johnson. “I love all of our players. We’re in a different world now and we support our guys that feel like that this isn’t the best place for them or that their journey here is over.

“The day he decided to go in (the transfer portal) I had a great conversation with him, so this wasn’t a surprise to us. We’re grateful for his contributions here and I wish him nothing but the best moving forward and will do whatever I can to help.”

To read bios and watch highlight videos of each of the 19 announced Troy signees click here.