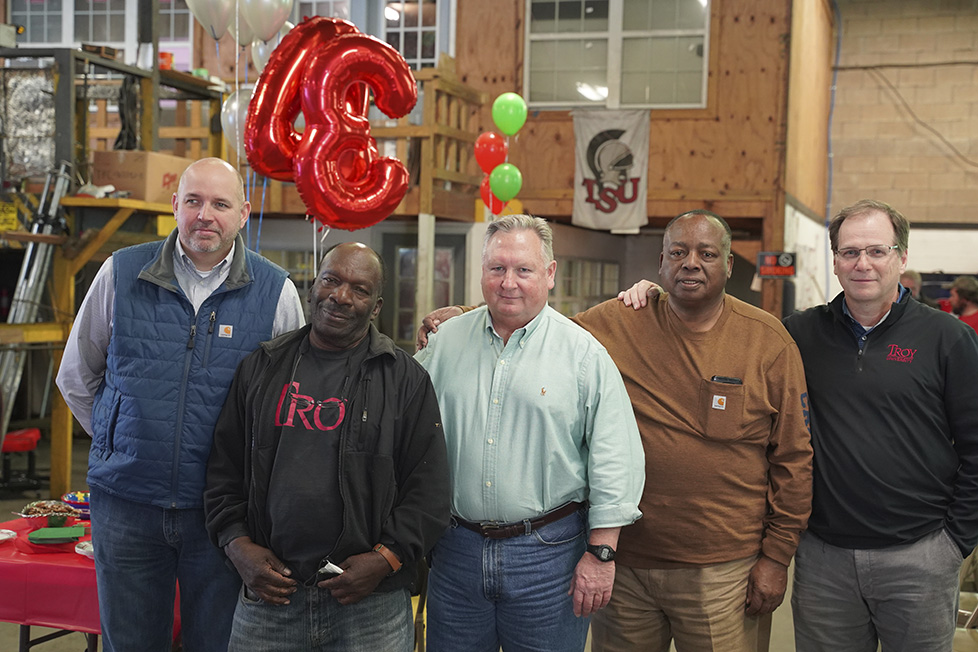 William (Will) Wright and Roy Taylor are retiring from Lyncoach Truck Bodies at the end of December. The longtime employees were honored at the company on December 16, 2022, with a reception to highlight their accomplishments and long tenure complete with gifts, as well as proclamations from the City of Troy.

Few people have the privilege to say they have worked at the same company for 40-plus years. Wright and Taylor both have that privilege. Each man has worked at Lyncoach Truck Bodies in Troy for a combined 87 years; Wright for 43 years and 9 months, Taylor 43 years and 8 months. Both men started working at Lyncoach in 1979, ironically exactly one month apart, and in Taylor’s case, on April Fools Day.

“I don’t feel like I am as old as I am. It really has seemed like a short 43 years, and 9 months. I really have enjoyed my time at Lyncoach,” Wright said. “This place (Lyncoach) means a lot to me. I was able to make a living while working here. I’ve been here a long time, and I have seen things done all sorts of ways. I have seen a lot of changes. I am proud to say that I was able to adapt to all the changes over the years.”

Taylor was asked how he selected Lyncoach as his place of employment.

“When I got out of the military, I needed a place to work,” he said. “I am from Troy, and I wanted to come back home. For me, Lyncoach made sense. It was only 5 miles from my house, and they offered good working hours.”

Taylor has been in charge of the fabrication department and the front half of the shop, and later given his current role of Shop Supply Manager.

“I truly enjoyed my days at Lyncoach. I loved the work and working with my hands,” Taylor said. “I take great pride in my work, and Lyncoach gave me the opportunity to showcase my talents. Lyncoach has played a major part in my life. It allowed me to provide for my kids and grandkids. Kept a roof over my head and food on the table. It has really meant a lot to me.”

Both were asked what advice they would give to young men and women entering the workforce today.

“As for my advice for young people joining the workforce today, I would tell you to simply, TRY! Show the people around you what you can do,” Taylor said. “So many people today do not understand that. You can’t make any money if you aren’t willing to work. If you take pride in your work, the money will come. Don’t spend your whole life chasing after money. People will see your effort and you will be repaid for it.”

“You need to come in and learn your job; but also try to learn everything else around you,” Wright emphasized. “You need to always try to create value for yourself and the company. Be dependable. Show up on time! It bothers me when people are late to things. When you want a raise, ask yourself ‘Am I doing anything to deserve this raise?’ Always remember that there will be good days and bad days. You just have to adjust with the times. You may think your job or your day is bad, but always remember it could be a whole lot worse!”

Jim Bray, president of Lyncoach said, “Mr. Will has been a great source of knowledge to help us learn how the business has grown and evolved and Mr. Roy is always willing to go and find whatever we need to get the job done.”

Previously Wright had worked in Cleveland, Ohio, for Ford Motor Company. Taylor served his country in the U.S. Army, fought for freedom in Vietnam, and served in the Army Reserves. Both attended Troy (State) University and are graduates of the historic Academy Street School. Both are also Troy University sports supporters. Taylor is an avid Charles Henderson High School fan, while Wright is a big Cleveland Browns fan.

Lyncoach Truck Bodies has been operating since 1916. The company opened the plant in Troy in 1960. Lyncoach manufacturers dry van bodies for class 3-8 trucks.