Dexter, The Feral Cat: A story worth telling 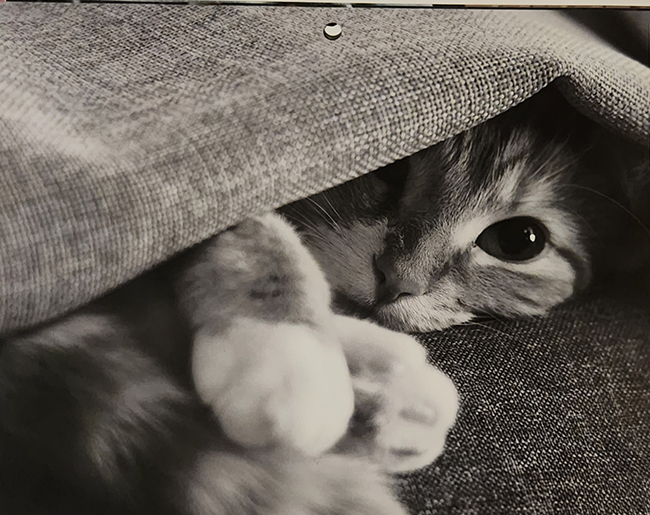 The Humane Society of Pike County’s annual Pet Photo Calendar Contest is a fundraiser in support of the society’s spay/neuter program. The funds raised help to reduce the number of the unwanted, unloved and, too often, abused animals in Pike County.

Those who enter their pets have stories to tell — stories about love, about compassion, about loss and remembrance. Every story is worth the telling and the hearing of it, Brockmann said. But, perhaps, none more than the story of Dexter, just a regular little cat.

Dexter was entered in the HSPC’s 2023 Pet Photo Calendar in memory by those who loved him – Ben, Paula and Madison Rogers, who live in Florida but have family in Troy.

Dexter came into the lives of the Rogers’ family in October 2017 in a very unexpected way.

“We were out near the barn in the back of our house and heard the faint crying sound of a kitten,” Ben Rogers said. “The crying was coming from under the barn but we didn’t know where.”

After a long time looking, Madison was able to locate the kitten and called to it. Soon, a small ball of fur with eyes as big as all the rest of it came out from under the barn.

“The kitten walked right up to us,” Rogers said. “The kitten was small, so small that I could hold him in the palm of my hand. The smallest kitten I had ever seen.”

The small ball of fur was a feral kitty or, as commonly known, a stray.

The Rogers family took the kitten in, cleaned it up and all three knew that the little stray kitten had a home — a loving home.

When Hurricane Michael hit Florida in 2018, Dexter rode out the storm with the Rogers family. He was there as comfort to the family while they had to rebuild their lives as their home was destroyed by Hurricane Michael.

In time, the Rogers family worked out a deal for a small farmhouse in Greenwood and was in the process of remodeling what would be their new home. Things were looking up for the family and for Dexter. Then, on March 24, 2022, two days after Ben Rogers’ birthday, tragedy struck the family again. They lost their house to fire.

And, they lost Dexter.

“He was in a separate room where he liked to sleep on a blanket in a basket when the fire started,” Rogers said. “Rather than getting out, Dexter hid under furniture and the smoke was just too much. Sadly, Dexter crossed the Rainbow Bridge. He was the most loving cat and such a wonderful part of our family.”

The Rogers family has dealt with terrible losses. The houses can be replaced but only memories remain of Dexter, the loving stray kitty that found a home, love and caring with the Ben Rogers family.

“God has provided us with new beginnings following each tragedy,” Rogers said. “He has placed us on the other side of each loss. He will take care of us as we continue to rebuild and to miss the love of a cat named Dexter.”