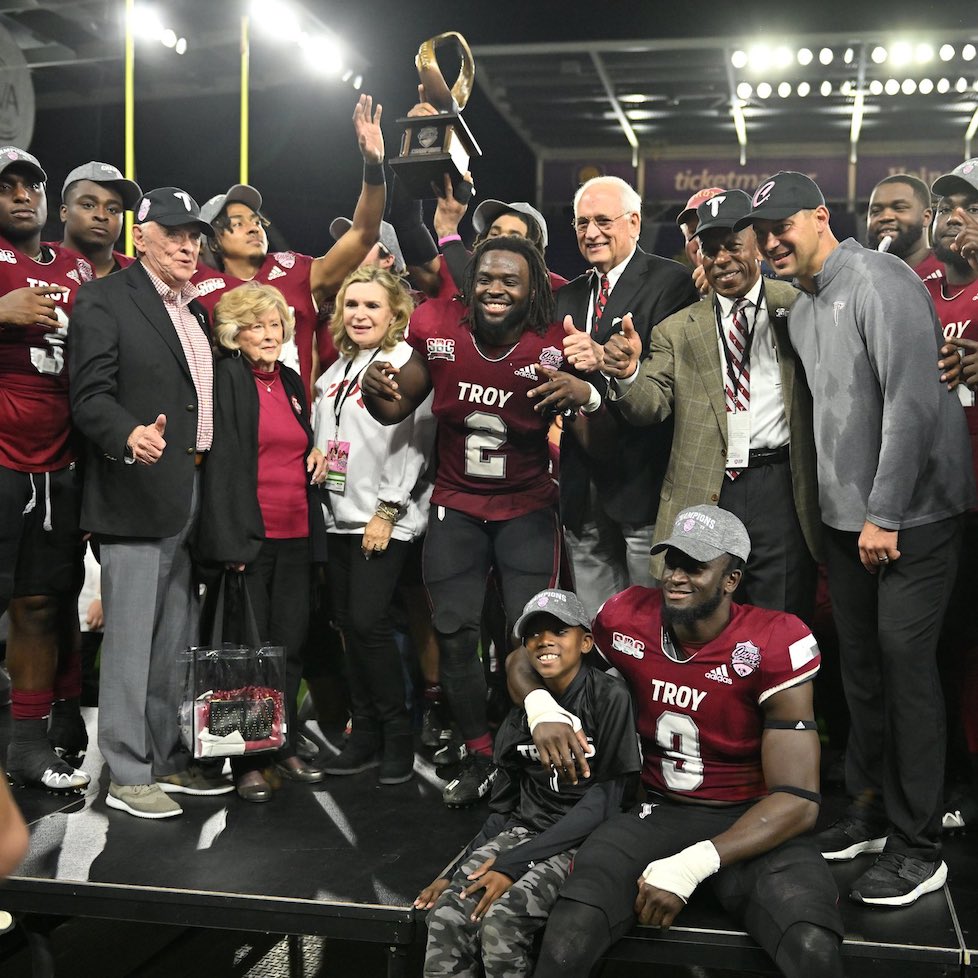 Despite struggling for much of the game offensively, the Trojan defense – which has been the heart and soul of the Troy team – came through once again, forcing four turnovers and forcing two turnovers on downs. After getting down 12-0, Troy scored 18 unanswered points to win its first bowl game since 2018.

“To hold these guys to 12 points, I don’t know what to say,” Troy coach Jon Sumrall said. “Defensively, we stayed together all year, and I could not be more proud. The two-point conversion was big, the fake punt was big there at the end — that added some excitement, huh? I wanted to get a touchdown there and put it away, but we hung in there. So proud of these guys. I just hope they keep us in the Top 25.”

The first quarter was a defensive slugfest between the two sides with Troy and UTSA exchanging punts for the entirety of the period. Twice, though, UTSA pinned Troy inside its own 5-yard line. The second time led to points for UTSA. As the Troy offense was looking to change the play at the line-of-scrimmage, the center snapped the ball without Troy quarterback Gunnar Watson being ready. The ball rolled through the end-zone and gave UTSA a 2-0 lead with 3:58 left in the opening period. UTSA would take that lead into the second quarter.

Troy started its next two drives inside its own 10-yard line, as well, with UTSA owning the field position battle.  As the second quarter began, UTSA extended the lead to 9-0 on a 3-yard touchdown pass from Frank Harris to Zachari Franklin. UTSA extended the lead again to 12-0 on a 42-yard field goal with 6:21 left in the half.

With the Trojans seemingly teetering on falling too far behind to come back, Troy managed to finally get going offensively. To this point, Troy had just 39 total yards. UTSA gave Troy three first downs on pass interference penalties but a bizarre situation set the Trojans up in the UTSA red-zone for the first time on the afternoon.

Watson’s third down pass was intercepted by Clifford Chatman who was hit by Deyunkrea Lewis and fumbled. RaJae’ Johnson jumped on the fumble and two plays later, Kimani Vidal bulled his way into the end-zone to cut UTSA’s lead to 12-7 with 50 seconds left in the half.

Troy then had another chance at points when Richard Jibunor intercepted a Harris pass and returned it down to the UTSA 13-yard line. A personal foul on Troy pushed Troy back inside the UTSA 40, however. Watson was then intercepted a few plays later in the end-zone with UTSA hanging on to the 12-7 lead at halftime. 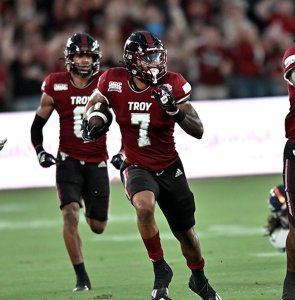 Troy opened the second half forcing a turnover when Jibunor sacked Harris and forced a fumble, recovering it himself, as well. Troy forced another fumble on UTSA’s next drive when Keyshawn Swanson stripped a Roadrunner receiver. The Troy offense was unable to turn either of those turnovers into points, though.

UTSA drove inside the Troy red-zone on its next possession but Trojan linebacker KJ Robertson stepped in front of a Roadrunner receiver and intercepted the pass, returning it 61 yards into UTSA territory. A few plays later, Watson found RaJae’ Johnson for a 12-yard touchdown pass to give Troy its first lead of the game, 13-12 with 2:43 left in the third. Watson then converted a two-point try to Clayton Ollendieck to extend the Troy lead to 15-12.

After the Trojan defense forced a three-and-out, Troy faced a fourth down near midfield. The Trojans faked the punt when Vidal took the snap and picked up the first down. Kicker Brooks Buce would cap off the drive with a 27-yard field goal to extend Troy’s lead to 18-12 with 9:18 left in the game.

UTSA found some new life on its next drive when running back Kevorian Barnes raced 53 yards inside the Troy 5. Troy safety Dell Petus saved the touchdown. The Trojan defense stood strong and forced a fourth-and-goal. On fourth down, Harris’ pass in the corner of the end-zone was knocked away by O’shai Fletcher forcing a turnover on downs.

UTSA managed to hold Troy on its next drive and got the ball back with just over three minutes remaining. UTSA drove into Troy territory before the Trojan defense stiffened again. On fourth down, Harris went for a deep shot but Reddy Steward broke up the pass to secure the Trojan win as Troy was able to run out the clock following the turnover on downs.

Defensively, Carlton Martial led the Troy defense, in his final game as a Trojan, with 14 tackles. Robertson earned game MVP honors with nine tackles and the interception. Robertson called it a special moment for him as his younger daughter got to see him play for the first time in the Cure Bowl.

“I don’t really know how to even explain it,” Robertson said. “She was born during COVID, so I didn’t want her at the games and just stuff happened and she couldn’t be at any other games even after that.

“I just made it one thing I really wanted – win, lose or draw – I just wanted my daughter to see me play one time. If she remembers it or not, I loved it just being able to see her and wave at her and stuff was the best feeling in the world.”