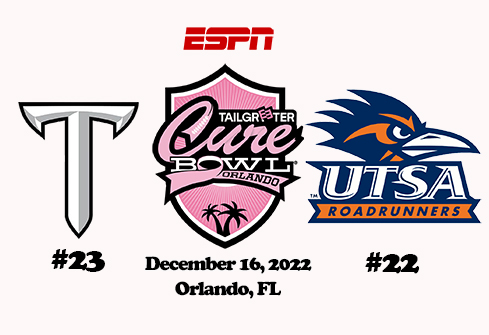 Off the heels of Saturday’s Sun Belt Championship win, the No. 23-ranked Troy Trojans (11-2) have officially accepted an invitation to face off with the No. 22-ranked UTSA Roadrunners (11-2) in the Duluth Trading Cure Bowl in Orlando, Fla., on Dec. 16.

The matchup will be between two of the top Group of 5 programs in the country in the Sun Belt Champ Trojans and Conference-USA Champ Roadrunners. It will pit two Top 25 teams in a showdown between two programs on 10-game winning streaks, which is tied for the third longest winning streaks in the entire country. The Trojans cracked both the AP and Coaches Top 25 polls on Sunday, coming in at No. 23 in the AP Poll and No. 24 in the Coaches Poll. It’s the first time Troy has enjoyed a Top 25 ranking since the 2017 season.

Troy is coming off a 45-26 win over Coastal Carolina in the SBC Championship, while UTSA defeated North Texas in the C-USA Championship 48-27 on Saturday, as well.

The Cure Bowl features the No. 1 pick out of the Sun Belt – selected by ESPN who runs the event – against the top seed out of the C-USA. In years past the New Orleans Bowl got the first selection from Sun Belt teams, this is the first year the Cure Bowl has the top selection.

The 2022 Duluth Trading Cure Bowl will be the eighth ever in the bowl’s history with Sun Belt teams holding a 3-4 record in the bowl game. Coastal Carolina earned the Cure Bowl bid the past two years, losing to Liberty in 2020 and defeating Northern Illinois last season.

Troy is in the midst of one of the best turnarounds in all of college football, going from 15 combined wins in the past three years combined to 11 wins and a conference championship, this season under first year coach Jon Sumrall. UTSA, meanwhile, has gone 23-4 in the past two years with back-to-back conference titles.

The Trojans are 5-3 all-time in bowl games and have won their last four consecutive bowl appearances. Troy’s last bowl appearance was in the 2018 Dollar General Bowl. In Troy’s eight past bowl appearances, this will be Troy’s first time in the Cure Bowl and also the first time the Trojans have played a bowl game in the State of Florida. In the past, Troy has played at the Silicon Valley Football Classic (San Jose, Calif.), the GMAC Bowl (Mobile), the Dollar General Bowl (Mobile) twice and the New Orleans Bowl (New Orleans, Louisiana) four times.

The Cure Bowl is the first bowl on the 2022 bowl schedule, taking place on Dec. 16 from Exploria Stadium in Orlando, Fla. The game will kickoff at 2 p.m. (central) on ESPN.