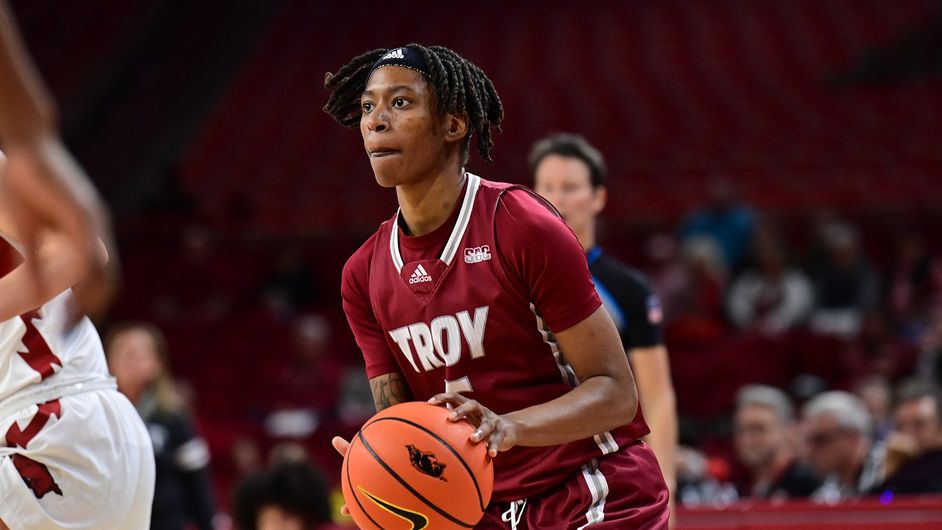 The Troy Trojans (3-4) women’s basketball team headed to SEC Country on Thursday night and dropped an 87-70 loss to the undefeated Arkansas Razorbacks (9-0) much like the men’s team did earlier in the week.

The game was first-year Troy assistant coach Chelsea Dungee’s return to her alma mater, where she was an All-American and one of the best players in school history. Arkansas greeted her return with a loss for her new squad, however.

Arkansas jumped ahead 27-17 in the first quarter and never looked back. The Razorbacks swelled the lead to 44-24 at halftime and while the Trojans managed to outscore Arkansas 46-43 in the second half it wasn’t enough to get back into striking distance.

As Felmas Koranga missed her second consecutive game with an injury, Makayia Hallmon led Troy with 25 points, while both Tai’Sheka Porchia and Jada Walton scored 10 points each. Ja’Mia Hollings chipped in with eight points and eight rebounds. Janeen Camp had 10 rebounds and two blocked shots, as well.

Troy finally returns home – after a six-game road trip – next Wednesday, Dec. 7, against Tulane at 6 p.m. for the first of three straight home games. Troy will play Mercer at home on Dec. 10 and LaGrange College on Dec. 14.