Carol Henderson Ruch, 79, passed away at her home in Fairhope, Alabama, on November 13.  She was the widow of Dr. Walter A. Ruch, Jr., of Memphis and daughter of the late Frederick and Louise Henderson of Troy, Alabama. 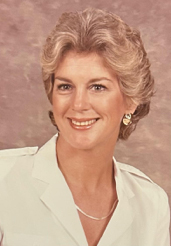 Born May 14, 1943, Carol was raised in Troy, Alabama.  She graduated in 1961 from Charles Henderson High School, which was named for her great-great uncle, who was a former governor of Alabama. Carol studied drama at Stephens College in Columbia, Missouri, participating in their summer stock program in Okoboji, Iowa, and earning a B.F.A. in 1963.  Later that year, she enrolled at the University of Alabama, where she earned a B.A. in speech in 1965. She was a member of Kappa Kappa Gamma sorority and was voted Sweetheart of Phi Gamma Delta fraternity.

Following her graduation, Carol lived in Atlanta for a year, where she worked for First National Bank as their Social Director, managing functions for the Bank’s Board of Directors and Executive Committee.  She later returned to the University of Alabama and earned a B.S. in Education in 1968.  She taught in the Tuscaloosa County system as well as in Brewton and Andalusia, Alabama, for several years.

In 1973, Carol moved to Memphis, Tennessee, and took a position with the National Bank of Commerce where she was in charge of the Executive Dining Room for the Board of Directors and senior bank executives.  Then, taking a break in her career to try something new, Carol enrolled at Le Cordon Bleu culinary school in London, England. She returned to Memphis and operated her own catering business before becoming Catering Manager for The Peabody Hotel following its reopening in 1981.

It was during this time that Carol was introduced to Dr. Walter Ruch, Jr.  Discovering shared interests in cooking, entertaining, snow skiing, and travel, the two fell in love and were married on May 7, 1983.  The next years saw the couple dividing their time between Memphis and the home they built on the Frying Pan River in Basalt, Colorado, near Aspen.

During her years in Memphis, Carol was an active member of Les Passes and was a frequent bridge player.  She had a lifelong love of reading, evidenced by the ever-present stack of books by her reading chair.  An accomplished cook, she was never stingy about sharing a recipe, and her kitchen shelves and office were filled with well-annotated cookbooks.

Carol’s love of travel took her all over the world, from which she returned with thoughtfully chosen decorative items, art and antiques.

Upon Walter’s retirement in 1995, they moved permanently to Basalt, spending the next 25 years entertaining friends and family, fly fishing, skiing, hiking, biking, and enjoying the art and restaurant scene in the Aspen Valley. They were members of the Roaring Fork Club and were also regular attendees at the Aspen Music Festival.

In 2020, Carol and Walter moved to Fairhope, Alabama, to be closer to family.  After 39 years of marriage, Carol lost the love of her life when Walter passed away in December 2021.  Carol will be remembered for her love of her many friends in Memphis, Troy, Aspen and Basalt, her culinary gifts, her skills as the consummate hostess, her love of her endless parade of dogs, her sense of style, and the joy she took in sharing laughter and a glass of wine with friends.

Carol is survived by her three siblings—Frederick Fox Henderson, Jr., Jeremiah Augustus Henderson, and Ann Henderson Kirkland; stepsons Trey (Mary Jane) and David (Nancy) Ruch and their families, and many nieces and nephews.

A gathering to celebrate the lives of both Carol and Walter will be held in Memphis, Tennessee, in early 2023. Memorial contributions may be made to a charity of choice. Arrangements are by Hughes Funeral Home and Crematory in Daphne, AL.