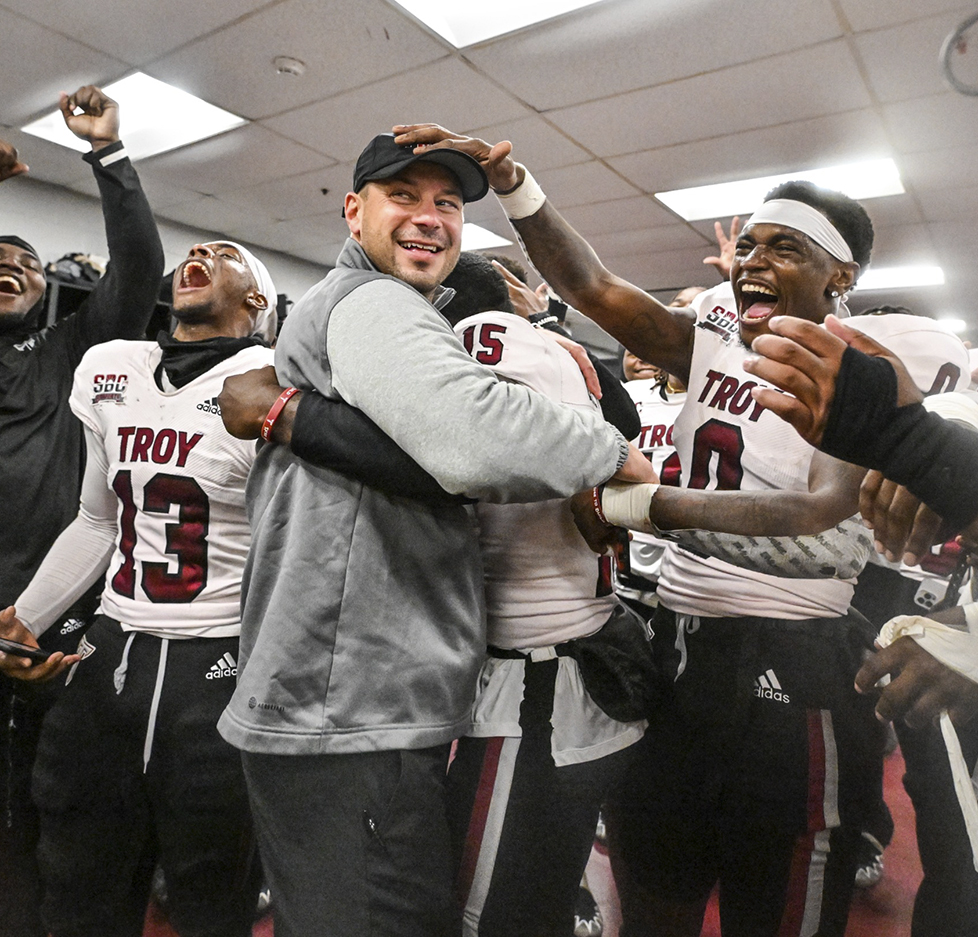 The turnaround at Troy under Jon Sumrall has been impressive. (Photo courtesy of Troy University Athletics)

The Troy Trojans (10-2, 7-1) are in the midst of a historic season in 2022 and that continues this Saturday with the Sun Belt Championship in Troy.

Already, Troy has won nine consecutive games this season, which is an FBS school record. The only other times Troy has ever won more consecutive games in a season was 11 straight wins in 1995 – as a part of the FCS – and the 1987 Division II National Championship team that won 12 straight.

In Troy’s vast football history, Jon Sumrall became the first coach in school history to win 10 games in his first year at the helm. In fact, it’s the best start to a head-coaching career at Troy since Charlie Bradshaw’s 1976 team went 8-1-1 and won the Gulf South Conference Championship in his first season as the head man. If the Trojans capture the Sun Belt Championship, Sumrall will join Bradshaw as the only Trojan head coaches to ever win championships in their first season at Troy. Sumrall’s 83.3 percent winning percentage in his first year – while not complete just yet – is the best since Atkins’ 85 percent winning percentage in his first year, as well.

When it comes to season turnarounds, there have been many big-time turnarounds in the Trojan history but none quite as stark – and quick – as the program turnaround this season. Troy Hall of Famer Billy Atkins took over a football program that had gone 1-8 in 1965. While Atkins’ 1966 team improved and went 5-5, it was his second team that really began the rebuild. The 1967 Trojans went 8-2 and won the Alabama Collegiate Conference (ACC) Championship before the 1968 team went 11-1 and won an NAIA National Championship.

Chan Gailey took over a program in 1983 that had been a combined 5-15 the previous two seasons and his Trojans went 7-4 before winning a Division II National Championship in year two.

The legendary Larry Blakeney took over a Troy program that was on the decline after dominating the 1980s. The Trojans went 15-17 in the previous three seasons and went 5-6 in Blakeney’s first season, but in 1992 the team went 10-1 and 12-1-1 in 1993 making it all the way to the FCS Semifinals.

In Neal Brown’s first year in Troy, the Trojans went 4-8 in 2015 after going 3-9 the previous season and not having a winning season since 2010. In Brown’s second year, Troy went 10-3 and won the Dollar General Bowl before winning a share of the 2017 Sun Belt Championship, which is the last conference title Troy has won.

Sumrall took over a Troy program in 2022 that had gone a combined 15-20 the previous three seasons, a losing record in all three seasons, and the Trojans have turned it around to have a 10-2 season with a chance to win the school’s outright Sun Belt Championship since 2009.

This will also be the first time that Troy has hosted a championship game of any kind – conference or national championship – at Veterans Memorial Stadium and the first time Troy has played host to a postseason game since hosting Appalachian State in the first round of the FCS Playoffs in 2000, more than 20 years ago.

While head coaches will typically get most – if not all – of the credit, or blame, for this level of success, Sumrall has been quick to point to his senior players as being the biggest reason for this historic turnaround and season.

“This has been a fun year and these young men on this team have made it fun,” Sumrall emphasized. “Coming in new and establishing a culture and creating an identity and getting buy in is not easy, but what made it easier is some of these young men that decided to return for another year that could have done something else.

“Carlton Martial, DK Billingsley, Austin Stidham, Craig Slocum, Will Choloh and I’m sure I’m leaving out some guys. I could probably name 20, I’m just grateful for the guys that could have done some else that decided to come back because we would not be where we are as fast as we are without them.”

Numerous bowls are in play for the Trojans, with Saturday’s championship encounter playing a part in them all.

The Cure Bowl in Orlando, Fla., has first pick of the Sun Belt Conference. Various bowl projections have Troy projected for the New Orleans Bowl, Frisco Bowl, Boca Raton Bowl and the Myrtle Beach Bowl. A New Year’s Six Bowl could even be in play, depending on how things go elsewhere in college football.

All of those bowl destinations will become much clearer on Saturday when Troy and Coastal Carolina clash in the Sun Belt Conference Championship at Veterans Memorial Stadium at 2:30 p.m.