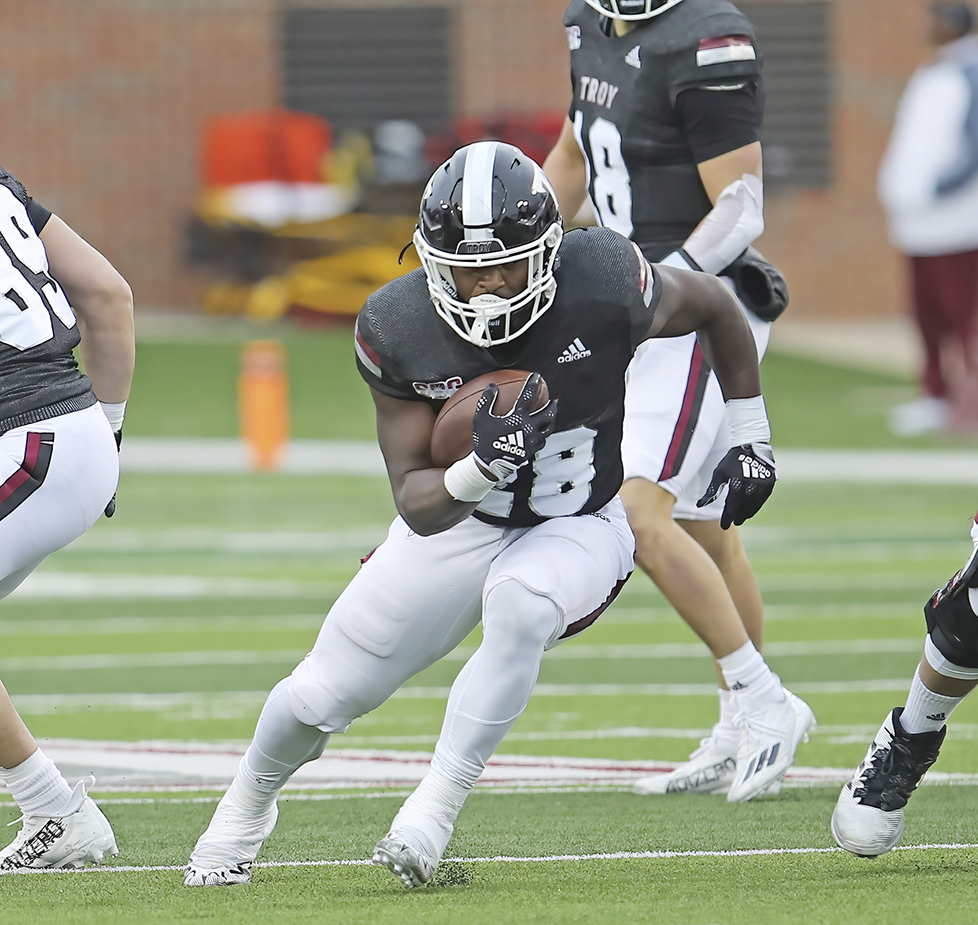 The Troy Trojans (10-2, 7-1) have the Sun Belt Conference Championship firmly in their sights this Saturday at home against the Coastal Caroline Chanticleers (9-2, 6-2).

The Trojans won the Sun Belt West Division Championship last week with a resounding 48-19 win over Arkansas State on the road, which saw the Trojans score 34 unanswered points in the fourth quarter. Coastal Carolina lost to James Madison last week by a score of 47-7, which gave Troy the right to host the championship game.

“They know how to win and we have to prepare really well to put us in position to have a chance to win this football game.”

Typically the Coastal Carolina offense runs through quarterback Grayson McCall (168-of-244 for 2,314 yards, 21 TD and 1 INT with 275 yards and 4 TD rushing) but the junior has missed the past three games with a foot injury. Coastal head coach Jamey Chadwell has been mum this week on whether or not McCall will play against Troy.

“He’s getting better each week,” Chadwell said. “It’s closer, probably, to a bowl game than it would be this week. He’s improved every week. Saturday will be four weeks and it was a 3-6 week injury. He couldn’t have played (last) Saturday, he wasn’t healed.

“We’ll just continue to see how he’s healing. I know our doctors and everything is saying it’s closer to six weeks, but if he can go this week, then I know he will want to go.”

Junior Jarrett Guest has earned the start for Coastal the last two weeks and has completed 19-of-43 passes for 302 yards, one touchdown and four interceptions. Bryce Carpenter is a senior quarterback who started one game last season, as well. Regardless of who plays quarterback, Sumrall said that Troy’s preparation wouldn’t change.

“Offensively, they are unique. They have some option elements with a vertical pass game attached to it,” Sumrall said. “They are dynamic offensively and have a lot of great players. We don’t know which (quarterback) will be available to play but the system doesn’t really change much. They have an identity that really doesn’t change a whole lot based on whose playing (at quarterback).”

Whoever plays quarterback will be surrounded by playmakers all over the Coastal offense, as well. CJ Beasley leads the Chanticleer running game with 692 yards and four touchdowns on 130 carries, while Sam Pinckney has 56 catches for 836 yards and two touchdowns. Jared Brown also has 42 catches for 709 yards and five touchdowns.

The past few weeks Troy running back Kimani Vidal has been the workhorse for the Trojan offense, amassing 450 yards and six touchdowns over the last two weeks. Vidal has also surpassed 100 yards rushing in three of the last four games, and he currently has 1,006 yards and nine touchdowns on the year. The running game has also opened up things in the passing game in recent weeks, especially with play-action passes.

“Earlier in the year we were struggling to run it and were really explosive in the passing game. I think they help each other.”

The Trojans are gearing up for the school’s first Sun Belt Championship Game appearance since the conference implemented a championship game in 2018. Meanwhile, Troy also hasn’t won a share of the Sun Belt Title since 2017 and hasn’t won the conference outright since 2009. This is Coastal Carolina’s second Sun Belt Title birth but the first time the Chanticleers will get to play in one. In 2020, Coastal Carolina was not able to play in the championship game because of COVID-19 cases throughout the team, and were declared co-champions with Louisiana as a result.

While Sumrall said that he wasn’t surprised that his team has made the level of turnaround it has this season, he gave the credit to a group of seniors that made the decision to return to the Trojans.

“This has been a fun year and these young men on this team have made it fun,” Sumrall emphasized. “Coming in new and establishing a culture and creating an identity and getting buy in is not easy, but what made it easier is some of these young men that decided to return for another year that could have done something else.

“Carlton Martial, DK Billingsley, Austin Stidham, Craig Slocum, Will Choloh and I’m sure I’m leaving out some guys. I could probably name 20, I’m just grateful for the guys that could have done some else that decided to come back because we would not be where we are as fast as we are without them.”

Another veteran player that decided to make the move to Troy for his senior season was receiver RaJae’ Johnson, who said when he arrived on campus that his goal for this season was to “get a ring.”
“Every one has player goals but I never try to base anything off (individual) goals,” Johnson said. “I’m in it for the team. My (individual) goals don’t matter because it’s a team thing and the mission is to get a ring.

“I can have 10 catches or no catches as long as we get a win. The main goal is to get the ring, so that’s my personal and team goal.”

Troy has a 2-3 record all-time against Coastal Carolina but has lost three straight to the Chanticleers between 2019 and 2021. Sumrall is looking for the Trojans to have a true home field advantage in the championship game, though.

“It’s at home so it should be easy for our fans to get here,” Sumrall said. “We’re the only FBS game going on in the state this week and we would like to challenge all Troy Trojans to be here. There is no need to watch any other game on TV, come to our game.

“We have a pretty big game here and it will be a great environment. Our students get in free, so I call out all of our students to make sure they’re here, too. We want to challenge our fan base to show up and make it feel like a real home field advantage.”

Johnson reiterated Sumrall’s call for Trojan fans to show up at Veterans Memorial Stadium this Saturday.

“We need everybody here, this is different,” Johnson said. “It’s the first time here, so we need to pack ‘The Vet.’ We need every student here, every parent, teacher alum, locals, everyone. We need to shut the city down honestly.”

Troy and Coastal Carolina kickoff at 2:30 p.m. at Veterans Memorial Stadium on Saturday.