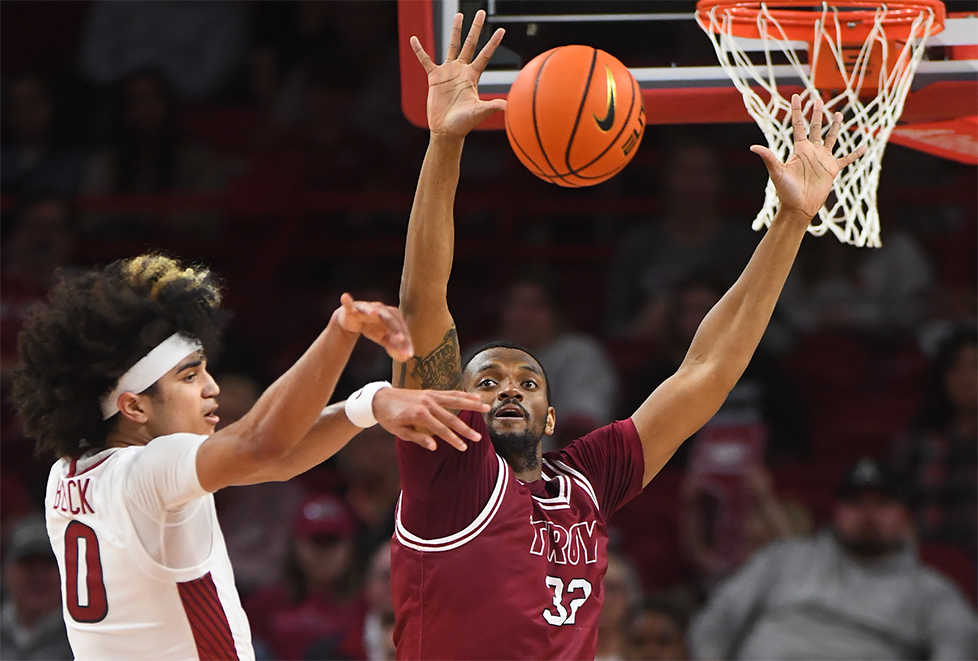 While the final score ended up being a double-digit loss for the Trojans, Troy led for much of the game. The Trojans led by as many as 10 points and led 33-31 at halftime after Christyon Eugene knocked down a free throw with two seconds remaining. Troy hit six three-pointers in the first half and forced 10 Arkansas turnovers, as well.

Troy came into the game limited as senior Darius McNeil and leading scorer Duke Miles were out, while during the game Nate Tshimanga suffered a head injury – when his head hit the floor – in the first half and Christian Turner went down with a leg injury in the second half.

The Trojans continued to have success in the second half, however, and led 58-54 with five minutes remaining. The Razorbacks then turned it on, going on a 17-0 run to go up 71-58 with just a minute remaining. Arkansas’ Ricky Council IV scored 13 points in the final six minutes of the game.

“They made tough shots at the end. Ricky Council really carried them at the end, and some of the shots he hit were big-time,” Troy coach Scott Cross said. “We knew we had to limit him and we did that for the majority of the game until the end. He gave them life in the end.

“I’m so proud to be Troy’s coach. These guys are so tough (and) they’re so resilient. We are so short-handed right now. We finished the game with basically six guys, and they battled until the end. That’s all you can ask for as a coach. I’m so intense with these guys because we are so tough, but I know we can be just a little bit tougher. We are so close to being great, and we just got to let it all out. Once we flip that switch, we will play with anyone in the country.”

Nelson Phillips had another big night for Troy with 22 points, seven rebounds, three assists and two blocks, while Eugene scored 13 points and Zay Williams chipped in with 11 points and four rebounds. Council led Arkansas with 27 points and both Makhi Mitchell and Anthony Black scored 14 points each. Mitchell grabbed nine rebounds and Black had eight.

Troy is back on the road on the road this Saturday, Dec. 3, at SIU-Edwardsville in Illinois at 2 p.m.