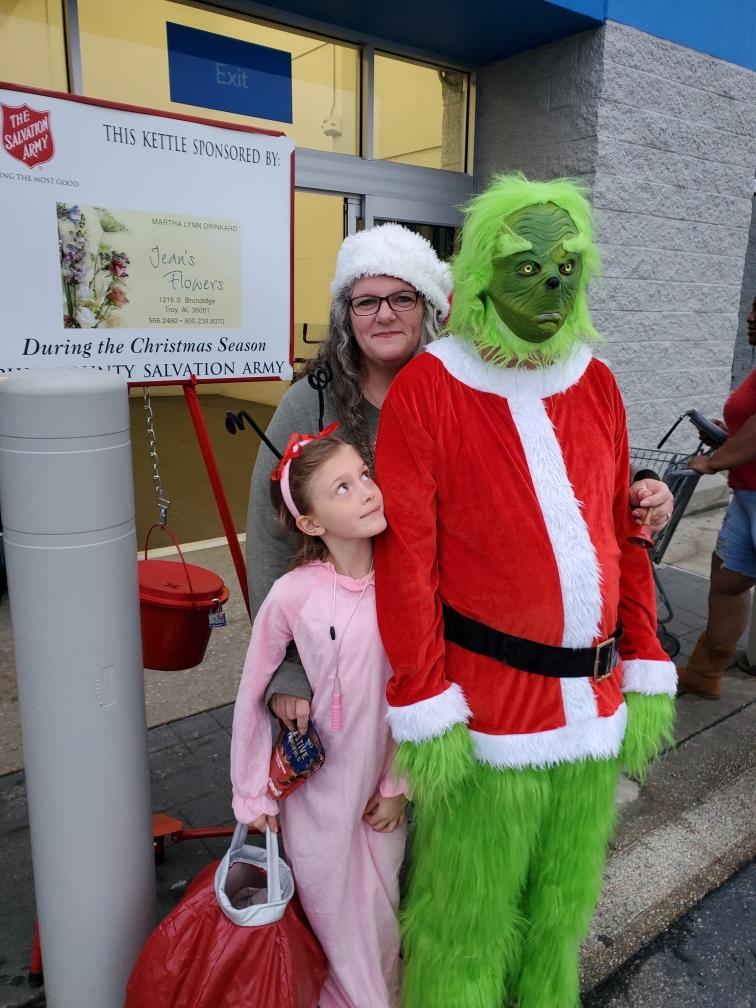 But, around Christmastime, Mr. Grinch’s heart grows bigger and bigger until his goodness just pops out for all to see.

Over the weekend, Mr. Grinch was ringing the bell for the Pike County Salvation Army along with his young friend, Cindy Lou Who.

“Children saw the goodness in Cindy Lou’s friend, Mr. Grinch,” said Donna Kidd, director of the local Salvation Army. “They all wanted to shake the hand of Mr. Grinch and thank him for ringing the bell so all children could have a good Christmas. The Grinch and Cindy Lou thanked all those who gave for thinking of others at this time of year.”

Kidd said ringers in costumes seem to bring out the giving spirit in people of all ages.

“When others give of their time to ring the bell, it brings out the generosity of others,” she said. “The people of Pike County and the surrounding areas are always very generous in their support of the Salvation Army’s annual Red Kettle Campaign and we are so grateful.”

This year, there is even more excitement surrounding the Red Kettle Campaign.

“Different groups are challenging each other as bell ringers,” Kidd said. “WTBF has two teams that will ring in December 9. The competition will be friendly but each team will ring to win. Hopefully, other groups will be ‘challenged’ to ring the bell this Christmas season. Friendly competition is always merry.  Carter Sanders has challenged friends and they will be ringing – the date TBA.

There are still many opportunities for bell ringers, individuals, families and groups.

“And, if we should be so fortunate as to have more bell ringers than places to ring, we’ll add a few more hours to the schedule,” Kidd said. “Wouldn’t that be wonderful?”