Charles Henderson’s unexpected run towards a possible state title has brought more attention to the school’s only state championship team. As it happens, I was the third-string sophomore quarterback on that 1980 team. What follows are some memories that stand out about that special team.

– I remember the Elba game was played in Troy. I think Elba was also undefeated at the time. Memorial Stadium was at least 90 percent full for that game. We had more fans at that game than any Troy State game that year. 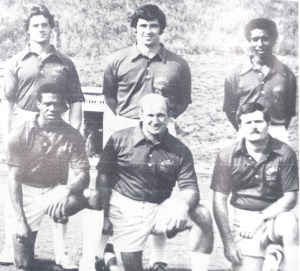 – In the playoffs, we had to beat an excellent Eufaula team, then Greenville on the road, which had perhaps the most physical team we played all year, and then Stanhope again, which we beat handily both times.

– In the Eufaula game, the Tigers jumped out in front of us by two TDs. Before every game, one of the last things Coach Jefcoat would tell us was that we should keep our poise if we fell behind early. We must have kept our poise, because that was it for Eufaula’s scoring that night.

– The team had tremendous leaders. All team members would agree that fullback Jerry Beverly was the undisputed team leader. Jerry was a lanky tailback his first two seasons on the varsity, but Coach Jefcoat moved Jerry to fullback his senior year (after Buddy Austin graduated). The 6-1, 180-pound fullback got the vast majority of carries on offense and was exceptional as both a player and leader.

– Joey Dennison was a 5-10, 240-pound right guard. He was the Wiregrass’s equivalent of John Hannah. Like Willie, he later won a Division II national title at Troy. I still remember practices where Willie and Joey would go one-on-one against each other. Talk about great against great!

– Case in point, the winning TD in the state championship game was a Tucker-to-Anderson quick post route. I still remember the name of the play, “Frog 92” – named for Kenny Keith, whose nickname was “Frog.” Keith had once been a wide receiver, but ended up being a great cornerback on that team. He’s now the head coach at Providence Christian. 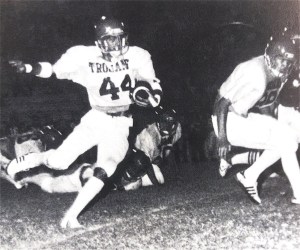 The Trojans defeated Hartselle in the State Championship. (CHHS Yearbook)

– Coach Jefcoat and several of my teammates have now passed away. But they still live in my mind, as they always will.

– I can’t remember the opponent – maybe Headland – but after one road victory, the team went back to the building which was the visitors’ locker rooms. The same building was going to be used for a school dance that night. When we got in the locker room, the DJ was setting up. While we were pulling off our shoulder pads, the DJ played Queen’s “We are the Champions,” one of the hit songs and albums of 1980.  Talk about a sign. That team did become the champions of 3A football that year. Forty-two years later the happy memories seem as fresh as yesterday.

… So thanks to the 2022 CHHS team for making more Trojans remember how special that 1980 team was. Now let’s make it two!