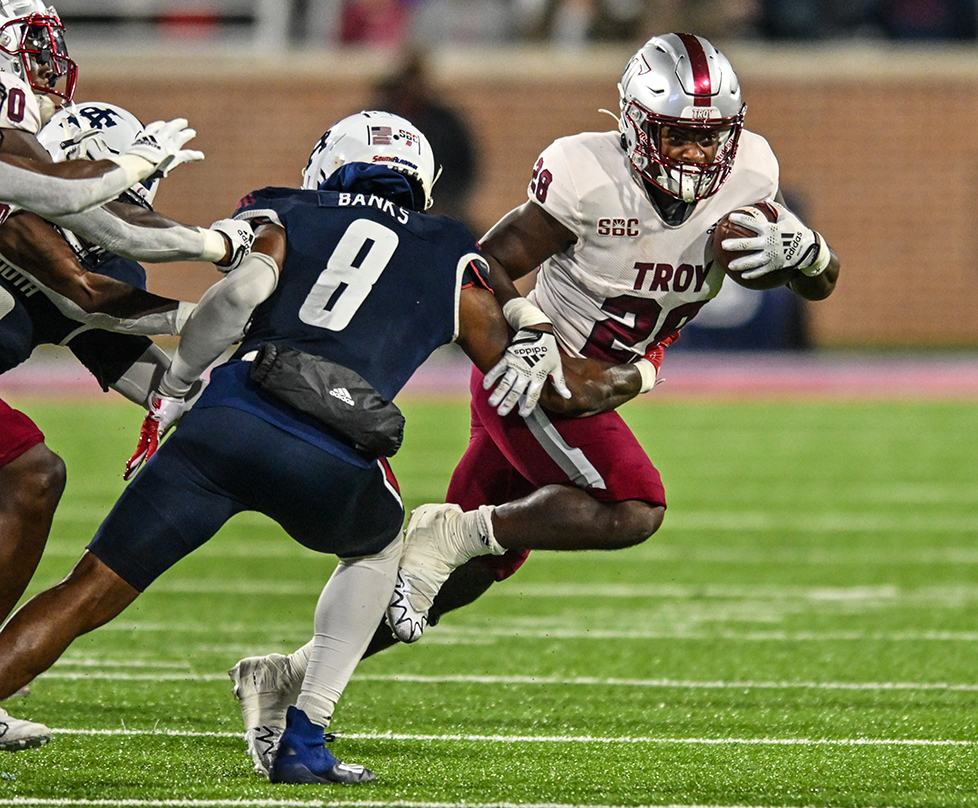 The Troy Trojans clinched the Sun Belt Conference West Division Championship – and home field advantage in the Sun Belt Title game – with a 48-19 win over the Arkansas State Red Wolves on Saturday night on the road.

Despite struggling in the first half, the Trojans once again came alive in the second half. Troy scored 34 unanswered points – including a pick six – in the fourth quarter and rode the busy legs of running back Kimani Vidal.

Troy struggled in the first half, with a pair of turnovers and a number of errors in all three phases of the game. On the first drive of the game, Troy drove into Arkansas State territory but quarterback Gunnar Watson overthrew Tez Johnson and Red Wolves defensive back Samy Johnson picked it off and raced 65 yards down to the Troy 3. The Trojan defense stood tall, however, and Arkansas State settled for a 20-yard field goal to take a 3-0 lead.

The Trojans took a 7-3 lead with six seconds left in the first quarter on a 1-yard touchdown run from Vidal that capped off a 14-play drive. Arkansas State cut the lead to 7-6 with 6:37 left in the first half with a 21-yard field goal.

With under two minutes left in the half, Troy had the ball with three timeouts but on the first play of the drive, Watson was sacked and fumbled. The Red Wolves recovered the fumble and just two plays later, Arkansas State quarterback James Blackman scored on a 30-yard touchdown run with just 24 seconds left. ASU took the 13-7 lead into halftime.

The Trojans finished off the third quarter with a 56-yard bomb from Watson to RaJae’ Johnson. Vidal then bulled his way into the end zone to open the fourth quarter and give Troy a 20-19 lead. Troy also went for a two-point try but came up short.

On the ensuing Arkansas State possession, Troy cornerback Reddy Steward stepped in front of a Blackman pass and returned it 67 yards for a Trojan touchdown to give Troy a 27-19 lead with 12:53 left in the game. Troy added to its lead with a 12-yard touchdown run from Vidal on the next drive to extend the Trojan lead to 34-19.

Arkansas State went for it on fourth down on its ensuing possession but Troy bandit Javon Solomon sacked Blackman to force a turnover on downs with 5:31 remaining. Vidal went right back to work and scored on a 39-yard touchdown to extend the Trojan lead to 41-19 with 4:38 remaining.

Steward intercepted his second pass of the game on Arkansas State’s next possession and Vidal surpassed both 200 yards on the day and 1,000 yards rushing on the season on the very next play. A few plays later, Damien Taylor scored on a 3-yard run to give Troy the 48-19 win and the Sun Belt West Championship.

Watson completed 9-of-15 passes for 141 yards, one touchdown and one interception, while RaJae’ Johnson caught three passes for 101 yards and a touchdown. Troy amassed 268 yards on the ground with Billingsley rushing for 52 yards on nine carries along with Vidal’s big night. Carton Martial led the Troy defense with six tackles, while Richard Jibunor had four tackles and two tackle-for-loss. Steward recorded two interceptions.

Earlier in the day, Coastal Carolina was upset by James Madison, meaning the Trojans will host Coastal in the Sun Belt Championship next Saturday. Not only is it the first time Troy will ever host a Sun Belt Title game but it’s also Troy’s first appearance in the championship game since its inception in 2018.

Troy and Coastal Carolina will play at 2:30 p.m. at Veterans Memorial Stadium in Troy on Dec. 3.