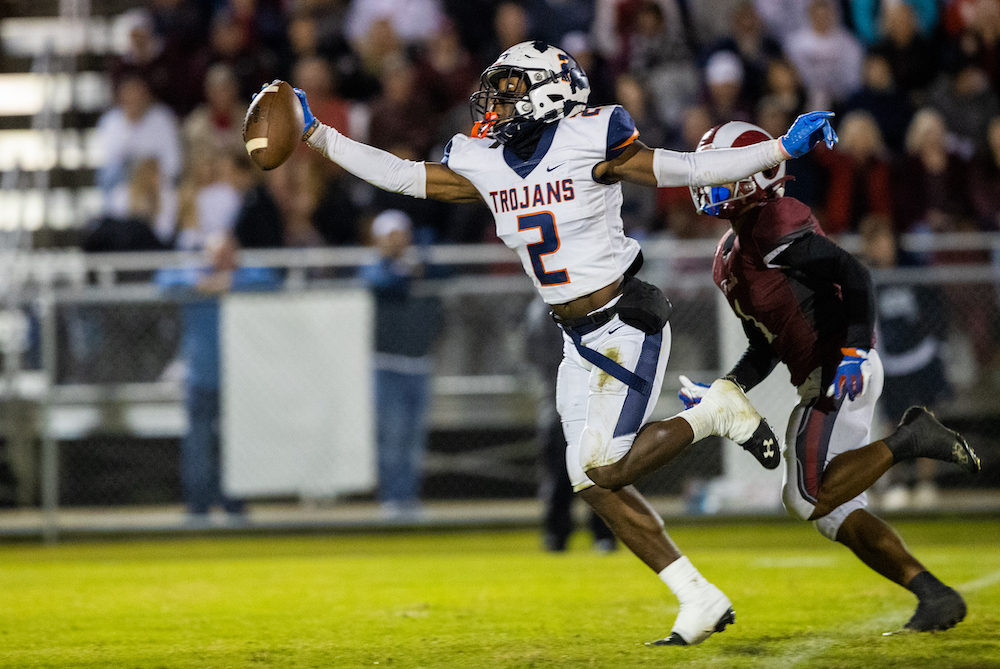 Jywon Boyd makes a one-handed reception in the first quarter for a big gain to set up a touchdown against Faith Academy Friday night in Mobile. (Photo by Dan Smith)

For the first time in nearly a decade, the Charles Henderson Trojans (12-1) will play for a state championship. The Trojans knocked off the Faith Academy Rams (11-3) by a score of 27-12 on the road Friday night in the Class 5A Semifinals.

CHHS dominated much of the game rolling up 307 yards of offense and 14 first downs on offense, while the Trojan defense forced four turnovers.

“We played extremely well and I think we played better than what the scoreboard says we did,” CHHS coach Quinn Hambrite said. “They are playing above and beyond everyone’s expectations and I couldn’t be more proud of them.”

The Rams had the ball four times in the first quarter and the Trojan defense forced three three-and-outs and a turnover on downs on those possessions. With just over two minutes left in the opening period, Charles Henderson receiver Jy’won Boyd made an eye-popping one-handed catch from Parker Adams and raced 61 yards down to the 1-yard line. On the next play, Boyd scored on a 1-yard run to put CHHS up 7-0. The game would never be tied again – and CHHS would never trail – for the remainder of the game.

As the second quarter began, Boyd made a diving 21-yard touchdown catch from Adams to extend the Trojan lead to 14-0 with 11:08 left in the half. After the Trojan defense forced another turnover on downs, the Ram defense put points on the board with a 61-yard interception return for a touchdown with 6:44 left in the half to cut the CHHS lead to 14-6. The PAT was blocked by Zion Grady. The Trojans would take that lead into halftime.

The Trojan defense forced a turnover to open the third quarter when Damien Hart recovered a Ram fumble. Adams then found Boyd for a 30-yard pass deep into Faith territory.

Charles Henderson drove inside the Ram 10 but miscommunication on a snap led to a 25-yard loss followed by a series of penalties that doomed the drive. The Trojan defense had the offense’s back once again, though, as Grady forced a fumble and Boyd scooped it up and rumbled 31 yards for a defensive touchdown to extend the CHHS lead to 21-6 with 3:44 left in the third quarter.

Charles Henderson’s Zach Batie wrestled the ball away from a Ram receiver for another Trojan interception and Peerson converted a 32-yard field goal with 2:42 left to seal the win. Faith Academy managed a 6-yard touchdown pass with 1:30 remaining to cut the lead to 27-12 but it was far too little, too late.

Boyd was Charles Henderson’s “human highlight reel” tallying 303 all-purpose yards in all three phases of the game. He rushed for 61 yards and a touchdown on 14 carries along with grabbing three catches for 112 yards and a touchdown. He also completed a pass for 33 yards, returned a fumble for a 31-yard touchdown and returned two kicks for 66 yards. Boyd also earned three tackles on defense.

Zach Coleman rushed for 46 yards on 15 carries and Adams completed 7-of-12 passes for 142 yards, one touchdown and an interception. Stephon Mosely caught two passes for 58 yards. Hart led the Trojan defense with eight tackles and a tackle-for-loss, while Grady totaled 6 tackles, two tackles-for-loss, a sack and a forced fumble.

While the feeling of happiness could be seen spread across each Trojan’s face following the game, Hambrite avoided receiving the typical celebratory Gatorade bath following the game. Why? Because CHHS still has work to be done.

“Honestly it feels complete,” Hambrite said when asked about his feelings following the win. I’m happy for our guys and the job they did but for me, we have on more. I’m going to be excited in the moment but it’s not time to be happy or celebrate just yet. We still have on more game to play. I am happy for these guys and the smiles I see on their faces, though.”

The Trojans will play the Ramsay Rams in the Class 5A State Championship on Dec. 1 at 7 p.m. at Jordan-Hare Stadium in Auburn.