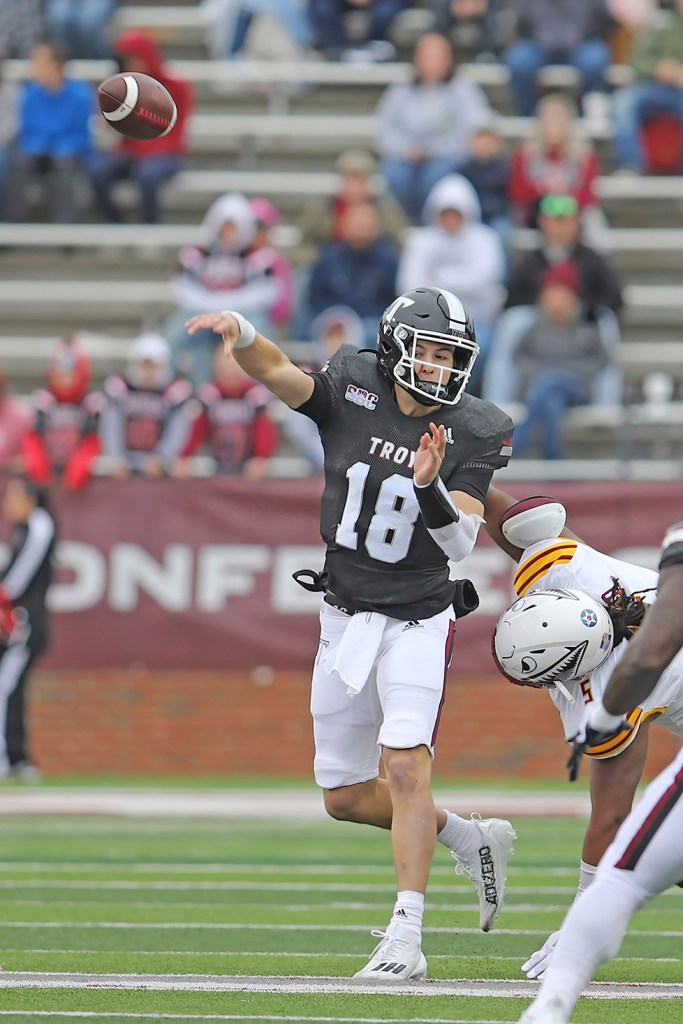 Gunnar Watson (18) and the Trojans will look to secure the Sun Belt West this week. (Photo by Henry Otto/Creative Media Images)

This Saturday, the Troy Trojans (9-2, 6-1) have the opportunity to wrap up the Sun Belt Conference West Division Championship and secure their spot in the Sun Belt Championship against Coastal Carolina. The Trojans will have to hit the road to do so, with the Arkansas State Red Wolves (3-8, 1-6) standing in their way.

Coming into this weekend, Troy is tied with South Alabama in the West with the Trojans holding the tiebreaker. South Alabama plays Old Dominion at 11 a.m. and if the Jaguars lose, it secures Troy the division crown for the Trojans, but if USA wins then Troy must win to take their first division title since the conference moved to divisions.

“I’m very grateful that we’re in this situation where we control our on destiny, we don’t need anyone’s help,” Troy coach Jon Sumrall said. “We are personally responsible for whatever outcome we get, it’s our responsibility. I think our guys understand that and I’m grateful for their hard work and everything they’ve done to put us in this position as a team. I have no doubt that we will respect this game, our opponent and the preparation it takes to play the game the right way.”

Under former Tennessee head coach Butch Jones, the Red Wolves are led on offense by James Blackman, who has completed 203-of-312 passes for 2,251 yards, 14 touchdowns and just two interceptions. Seydou Traoare has 46 catches for 611 yards and four touchdowns, while the Red Wolves have three difference receivers with more than 400 yards on the season.

The Red Wolves offense is struggling on the ground this season, averaging 92 rushing yards per game and less than three yards per carry. The Arkansas State defense has also been gashed this season, giving up 404 yards and 30 points per game.

Troy’s running game has come alive in recent weeks, averaging 132 yards on the ground over the past eight games, including 264 yards last week, which was the most rushing yards by a Trojan team since 2019. Kimani Vidal also had the second biggest rushing game in school history last week.

On the defensive side, Troy had to play without All-American linebacker Carlton Martial, who is recovering from a lower leg injury suffered against Army. While Sumrall said Martial was still recovering he believed that the senior would likely be available for this week’s game.

This week’s matchup will be televised nationally on ESPNU+ after the game was moved to the network from ESPN+. The game time has also been moved back from 2 p.m. to 2:30 p.m. This will be the third time in the past five weeks that Troy has played on national television.