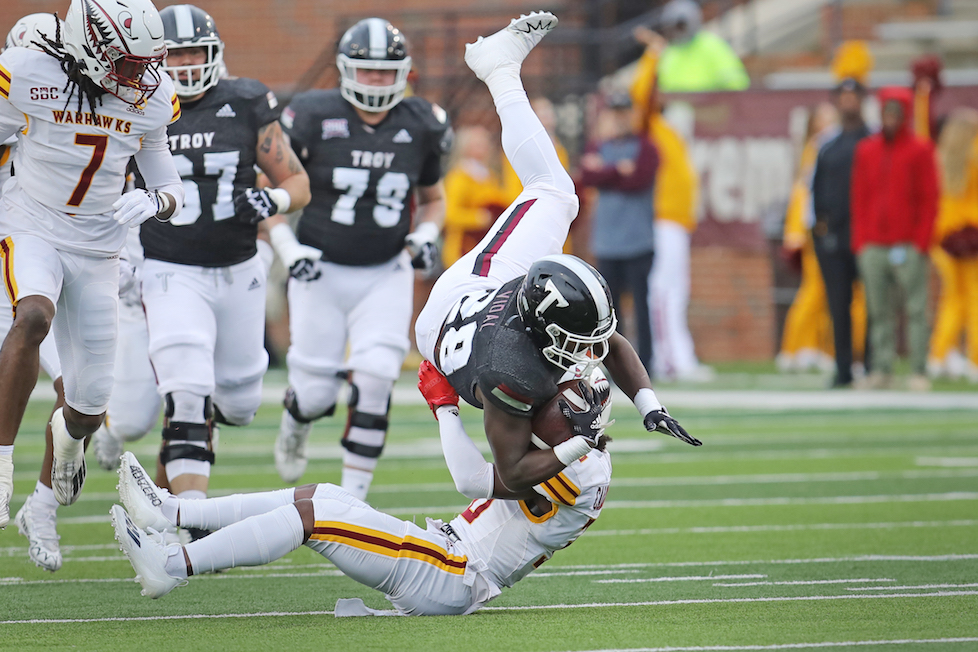 The Troy Trojans (9-2) celebrated Senior Day – and the regular season home finale – with a dominant win over Sun Belt Conference foe Louisiana-Monroe Warhawks (4-7) by a score of 34-16 on Saturday.

All eyes have been on Troy’s talented defense as senior linebacker Carlton Martial set the NCAA career tackle record last week, but the Troy offense got the attention this week off the back of a historic performance from junior running back Kimani Vidal, who finished the day with the second-highest rushing total in a game in Troy history. The Troy offense also rolled up a season-high 264 yards rushing. This Trojan team also did something no other Troy team has done in its history in the FBS.

“I’m really excited to see our team get their eighth consecutive win, the first time in FBS Division I history that’s been done,” Troy coach Sumrall said. “With a program that has a very storied history it’s hard to do something that’s never been done.”

Vidal amassed 242 yards and two touchdowns on 29 carries, just two yards shy of Eddie Brundidge’s 1986 record of 244 yards on the ground. In recent weeks Troy has struggled on offense – especially early on – but that was not the case against ULM. Troy rolled up 179 yards of offense and only had to punt once in the first half.

“We did start faster today, which was nice, because we have not been starting out well,” Sumrall said. “I thought we played pretty clean for the most part.”

A 35-yard field goal and a 45-yard field goal gave Troy a 6-0 lead after the Trojans weren’t able to finish off the first few drives, but then the Troy running game got going. Troy marched on a 6-play, 63-yard drive in the second quarter with running back Kimani Vidal rushing for 62 of those yards. DK Billingsley then finished off the drive with a 1-yard touchdown run to put Troy ahead 13-0 with 2:04 left in the half.

Troy’s defense got in on the fun on the ensuing possession when Shakel Brown sacked ULM quarterback Chandler Rogers and stripped him of the ball. Senior defensive end Antonio Showers scooped up the ball and raced 13 yards for a touchdown to extend the lead to 20-0 with 1:51 left in the half.

“It was a special moment for me because it was my very first touchdown here at Troy and to do it in this situation in ‘The Vet’ in front of my family, friends and fans that came out to support the team and seniors was really special,” Showers said.

ULM finally got on the scoreboard as time expired in the half with a 27-yard field goal as Troy led 20-3 at halftime.

The Trojan offense picked up right where they left off in the second half as Tez Johnson’s 28-yard punt return set Troy up in ULM territory. Vidal then rumbled for a 40-yard pickup, followed by a 5-yard touchdown run with 12:00 left in the period to extend the Troy lead 27-3. 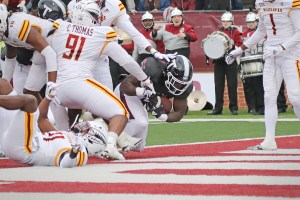 ULM finally found the end-zone on its next possession when Rogers scored on a 12-yard scramble to cut Troy’s lead to 27-10 with 7:25 left in the third quarter.

Vidal’s big night continued as he scored on a 3-yard touchdown on a drive in which the Trojans ran the ball the entire way once again. ULM managed to get on the scoreboard again with a 1-yard touchdown run from Rogers. The Warhawks went for a two-point conversion but the Trojan defense held them out keeping a 34-16 lead with 3:14 left in the game.

On the next drive, Vidal came within a hair of breaking the school rushing record. In fact, he did break it before a penalty wiped it out.

“We would have liked to have gotten him the record but the team stuff is what we make those decisions around,” Sumrall said of trying to get Vidal the record. “I’m really proud of him and thought he played pretty well. It’s been great to see him gain steam as the season has gone on.”

Vidal said he and his teammates were aware of how close he was to breaking the record but his reaction to missing it by two yards was as to be expected from a humble player and he praised his teammates for the success.

“It is what is, we tried,” Vidal said with a shrug of missing the record. “The offensive line blocked well and everyone was doing their job and the runs were just there. I’m just blessed the offensive line and receivers blocked so well for me. All praise goes to them.”

Quarterback Gunnar Watson completed 10-of-17 passes for 78 yards, while Vidal amassed the 242 yards rushing. Tez Johnson caught six passes for 42 yards. The Troy offense totaled 342 yards and held ULM to 228 yards. On defense, Troy was led by TJ Harris with eight tackles, while Showers, Javon Solomon, Brown, Richard Jibunor and Will Choloh each had a sack.

Troy senior Carlton Martial was held out for the game after suffering a lower leg injury and missing much of Troy’s practices this week.

“He did not practice Monday, Tuesday or Wednesday, but he did some walkthrough stuff on Thrusday and ran around (Friday),” Sumrall said of Martial. “I’m going to always advise our young men like they are my own son and I’m going to protect them if they aren’t ready. I would be really surprised if he’s not available next week, but won’t know where it’s trending until Tuesday or Wednesday and probably won’t know officially until Friday.”