CHHS topples UMS-Wright to advance to 5A Semifinals 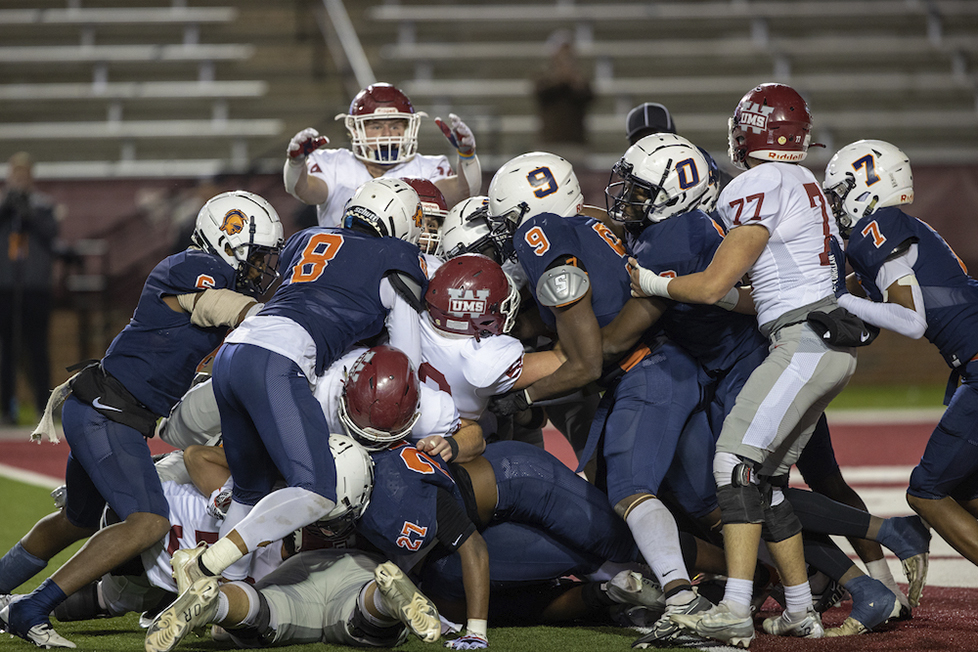 A goal line stand was the difference as the Charles Henderson Trojans (11-1) hung on to defeat the UMS-Wright Bulldogs (12-1) by a score of 19-16 in the Class 5A Quarterfinals on Thursday night.

With 6:03 remaining in the game – and CHHS leading 19-14 – the Bulldogs marched on an 11-play drive down to the Charles Henderson 5-yard line with a first-and-goal. On first down, Trojan linebacker Qua Grimes stopped star running back Cole Blaylock for a short pickup. On second down, linebacker Damien Hart stopped Blaylock at the 2-yard line. On third down, Jy’won Boyd tripped Blaylock just inside the one to force a fourth-and-goal with under two minutes remaining.

On fourth-and-goal, the Bulldogs attempted a quarterback sneak but Trojan defensive linemen Zion Grady, Benton Dunn and Zarion Mack refused to budge and Hart slammed the quarterback to the turf on Larry Blakeney Field, forcing a dramatic turnover on downs as the Trojan faithful erupted.

“We were expecting the quarterback sneak there, so we chopped it down and had a guy over the top just in case they tried to sneak it over the top,” CHHS coach Quinn Hambrite said. “They went nowhere and that’s a testament to those guys being in the weight room. A year ago that wouldn’t happen.

“A year ago we don’t make that play. That stop was big time. That was the best play I have ever been a part of in my life.”

After UMS-Wright conserved time – with a timeout – on the ensuing CHHS possession, the Trojans were forced to punt with 21 seconds left but opting to take a safety instead of risk a block against a Bulldog team that has blocked four kicks this season.

“We took the safety because we didn’t want to punt the ball and risk a block for a touchdown,” Hambrite emphasized. “So, I told (punter) Nik (Peerson) to run with the ball for a little bit and then just run out of bounds. He did that and we kicked the ball deep and they believed.

“They believed the entire time that we would win the football game and that’s what I’ve been trying to instill in them this whole time. You can see it coming to fruition and I’m just proud of these guys. I love them to death.”

Boyd dragged Blaylock down on the ensuing kickoff and the Bulldogs attempted a last-ditch “hook and lateral” as time expired but the Trojans were having none of it and punched their ticket to the Class 5A Semifinals next week.

“They have worked extremely hard for this opportunity and I don’t want anyone to think this is microwaved success, because they have endured a lot over the last few years and they deserve this,” Hambrite said.

The quarterfinal win makes more history for a Trojan team that has already made history this season as Charles Henderson moves into the semifinals of Class 5A for the first time in school history. The Trojans won a State Championship in 1980 and made it to the championship game in 2013 but the team in 1980 played in Class 3A and the 2013 squad competed in Class 4A. No Trojan team in CHHS history has ever made it past the third round in Class 5A, until now.

UMS-Wright opened the game with an 11-play, 77-yard drive that the Bulldogs capped off with a 21-yard touchdown pass from Sutton Snypes to Matthew Hedge with 4:48 left in the first quarter to go up 7-0.

Charles Henderson answered and capped off its own 9-play, 71-yard drive with an 8-yard touchdown pass from Adams to Boyd with 37 seconds left in the period to tie the score 7-7.

Charles Henderson dominated the rest of the second quarter, forcing two punts along with Mario Davenport intercepting a Snypes pass late in the half. The Trojans took their first lead of the game on a 36-yard touchdown pass from Adams to Boyd to put CHHS up 13-7 after a failed PAT. The Trojans would take that lead into halftime.

UMS-Wright recovered an onside kick to start the second half and proceeded to march on a 12-play drive that was capped off with a 2-yard touchdown run from John Charles Erwin to give the Bulldogs a 14-13 lead with 6:33 left in the third quarter.

After a quick CHHS three-and-out, the Bulldogs marched deep into Trojan territory again but on second down, Grady sacked Snypes for a loss of 15 yards. The Bulldogs would eventually settle for a field goal attempt but the holder bobbled the snap and Grimes covered up the fumble, snuffing out that scoring attempt.

The Trojans closed out the third quarter with a 12-play drive that bled over into the fourth quarter, capped off by a 5-yard touchdown pass from Adams to Boyd with 10:48 left in the game. The Trojans attempted a two-point try but couldn’t convert it, retaining a 19-14 lead. The two sides traded punts until the exciting finish.

The Bulldogs were ranked No. 1 in Class 5A all season long by both the ASWA and MaxPreps and came into the quarterfinals having won 23 of their last 24 games. Charles Henderson outgained UMS-Wright 258 yards to 230 and also won the penalty battle with the Trojans being flagged five times compared to the Bulldogs’ eight penalties. The Trojans also forced two turnovers, while they didn’t give up a turnover.

For UMS-Wright, Blaylock rushed for 127 yards on 26 carries.

Charles Henderson will play the winner of Faith Academy vs. Gulf Shores in the semifinals next Friday night. The location of the game will be decided after the other quarterfinal game is decided.