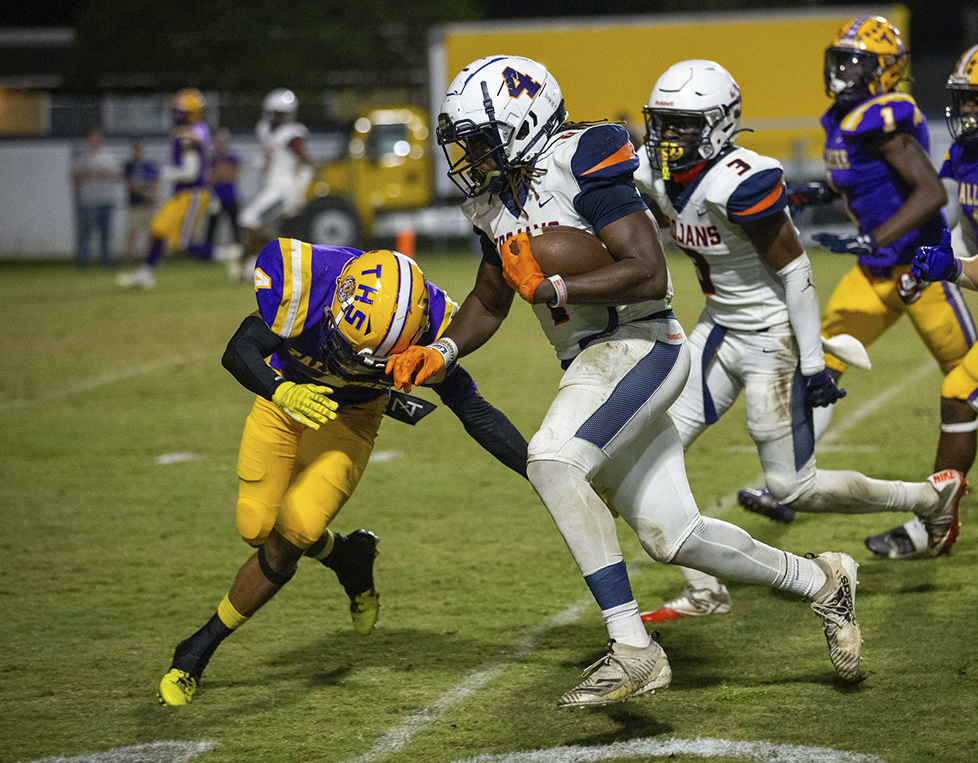 Zach Coleman (4) has more than 700 yards rushing this season. (Photo by Dan Smith)

For the first time since 2013, the Charles Henderson Trojans (10-1) have advanced to the AHSAA State Quarterfinals, and will host the undefeated UMS-Wright Bulldogs (12-0) at Veterans Memorial Stadium on Thursday night.

Since 2013, no Trojan squad has made it past the second round of the playoffs and this season’s team is on the doorsteps of making it back to the Semifinals for the first time since that 2013 team, as well.

The 2022 season has been a season of redemption for the Trojans. After winning just three games combined in the past two seasons – and missing the playoffs in back-to-back years for the first time since the 1990s – this year’s Charles Henderson squad has been hungry and motivated from the beginning.

There have also been many parallels between the 2013 team and the current Trojans. The 2013 season was the last region championship that a CHHS team won – until this season – and was the last time CHHS made it to past the second round of the playoffs, as well.

Interestingly enough, UMS-Wright was also in the 2013 team’s playoff path. In 2013, Charles Henderson and UMS-Wright met in the Class 4A Semifinals, with a spot in the State Championship on the line. On that November night, UMS-Wright scored a late touchdown to cut the Trojan lead to 38-36. Needing a two-point conversion to send the game into overtime, the Trojan defense stood tall and batted down the Bulldogs’ pass attempt in the end zone to secure the win.

That 2013 Trojan team went on to fall to Oneonta in the State Championship Game at Bryant-Denny Stadium and was the last time CHHS reached the AHSAA Super 7. In fact, Charles Henderson has reached a state championship game just twice in school history, including the 1980 squad that won the Class 3A State Championship.

UMS-Wright is coming off a 48-30 win over Beauregard in the second round last week. Beauregard gave CHHS its only loss on the season earlier this year. Charles Henderson, on the other hand, thrashed Tallassee 34-7 last week on the road.

The Bulldog offense goes through senior running back Cole Blaylock, who has tallied 1,896 yards and 27 touchdowns this season. The South Alabama commit surpassed 100 yards rushing in all but one game this season and amassed over 200 yards on three separate occasions, including a 311-yard outburst against Headland in the first round of the playoffs.

Junior Joe Lott also leads the Bulldogs with five interceptions along with 68 tackles on the defensive end.

For Charles Henderson, junior athlete Jy’won Boyd stole the show a week ago, recording eight catches for 189 yards and two touchdowns along with three interceptions on defense. Boyd is on the verge of cracking 1,000 receiving yards coming into this week as the junior leads CHHS with 51 catches for 947 yards and 13 touchdowns along with 263 yards and one touchdown rushing. The speedy athlete is also tied with senior safety Mario Davenport for the team lead in interceptions with four.

Junior quarterback Parker Adams completed 144-of-241 passes this season for 2,166 yards, 22 touchdowns and nine interceptions, while junior running back Zach Coleman has 129 carries for 724 yards and eight touchdowns on the ground. Senior receiver Stephon Mosely has also emerged a big-play receiver, hauling in 37 catches for 607 yards and four touchdowns.

On defense, senior linebacker Damien Hart has more than 100 tackles, while sophomore Zion Grady is among the state’s leaders with more than 30 tackles-for-loss and over 15 sacks on the year.

CHHS and UMS-Wright have crossed paths just three times in the past, including that 2013 playoff matchup. The two sides met again in 2016 and 2017 with the Bulldogs winning both of those games. UMS-Wright leads the all-time series with CHHS 2-1.

Charles Henderson and UMS-Wright will face off at 7 p.m. at Veterans Memorial Stadium in Troy this Thursday night. The winner advances to the Class 5A’s Final Four and will play either Gulf Shores or Faith Academy in the Class 5A Semifinals next week.