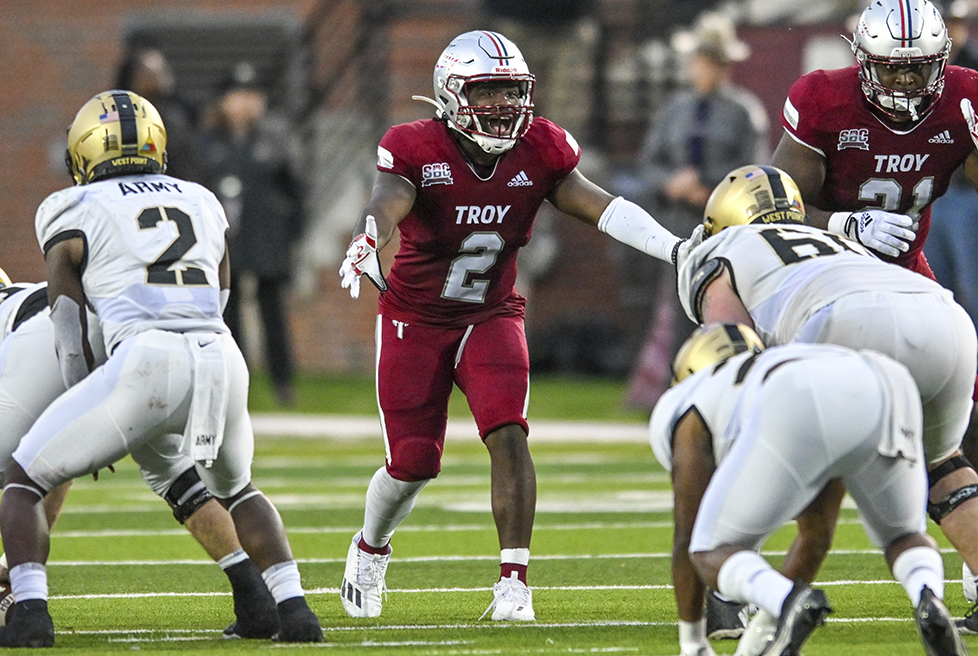 Carlton Martial (2) and the other Troy seniors enter their final home game this Saturday. (Photo courtesy of Troy University Athletics)

This past weekend, Troy Trojan senior linebacker Carlton Martial wrote his name in the history books by becoming the all-time leading tackler in NCAA FBS history.

The senior recorded a career-high 22 tackles to give him 548 career tackles, which is a stat that will be very hard to surpass for anyone, especially in the modern age of football.

“I don’t know what it’s like to do what Carlton’s done,” Sumrall said with a smile. “I’ve only seen Carlton Martial be able to get 20 tackles in a game. He never ceases to amaze me.

“He’s an unbelievable young man, and I had the privilege to recruit him out of high school. I’m so proud of him because he’s had so many people in his ear telling him he wasn’t enough but he’s truly a tackling machine. I’ve known him for so long, since his high school career. When I was hired back, it wasn’t about trying to recruit new high school kids. It was about getting him to return for his sixth year.”

Martial is one of the most decorated players in Troy history with numerous school, conference and NCAA records along with All-Sun Belt and All-American honors. He’s also won and been the finalist for a number of awards. He’s one of a few semifinalists for the Burlsworth Trophy this season along with being on the Watch List for virtually every defensive award in the country.

“It’s crazy to think about, but it hasn’t really soaked in yet,” Martial said when asked about breaking the FBS record. “I’m at a loss for words. I’m proud of my team. I didn’t come back to break this record. I came back for my teammates. Honestly, it’s really a team effort. We were 11 guys on the same page.” 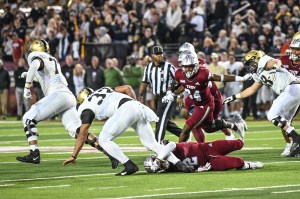 Carlton Martial (2) makes the tackle that set the NCAA record for tackles in a career. (Photo courtesy of Troy University Athletics)

That selfless attitude is not lost on his teammates either.

“There is no guy like Carlton,” senior defensive tackle Will Choloh said. “We talked about (the record) before the game and we were telling him that this would be the perfect game for him to break the record, and all he kept on saying was, ‘Man, I’m not going to focus on that.’

We made sure to let him know it, though, and we kind of knew he would do it. It’s a special moment for a special guy and I’m happy for him because he’s going to have plenty of more tackles because we still have a couple of games more to win.”

“I’m really proud of him,” Showers emphasized. “I’ve been with him here five or six years now and he’s just a guy that comes in and puts in the work and does what he needs to for the team and sacrifices.”

Martial currently has 548 tackles, 50 tackles-for-loss, 10.5 sacks, six interceptions, 15 pass breakups and eight forced fumbles in his Troy career. Those numbers include four consecutive seasons with 100 or more tackles. He earned Sun Belt Defensive Player of the Week honors for the second consecutive week and third of the season, as well.

“It’s really unique because 14 of those 22 seniors are guys I was a part of recruiting,” Sumrall said. “We’re grateful for their contributions to Troy football and helping recapture the winning spirit we want to have around here in their last year of eligibility.” 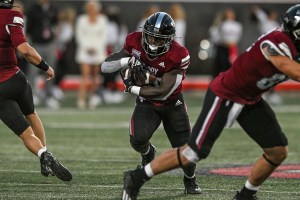 Billingsley has had a career resurgence this season with 509 yards and four touchdowns rushing after amassing just 126 yards and one touchdown in the past two seasons combined. Billingsley was given few opportunities in 2020 and 2021 despite coming off a 2019 in which the Scottsboro native led Troy in rushing with 901 yards and 10 touchdowns.

Both Stidham and Butler have been stalwarts of the Troy offensive line for a number of years. Butler has started every game at guard this season and started 10 games in 2021. The Opelika native started his Troy career swapping between offensive and defensive line in 2020 and began his college career at Jacksonville State, where he was a starting offensive guard for two seasons.

Stidham is the most decorated player on the Troy offensive line and one of the most accomplished linemen in the Sun Belt. The Russellville native is a three-time All-Sun Belt selection and three-time Academic All-American. Stidham ranked third in the Sun Belt in pass blocking last season and has started in every game since 2019. He’s also a finalist for the Campbell Trophy. 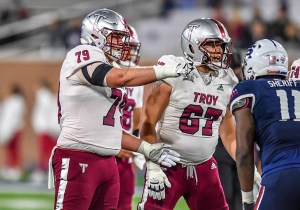 Austin Stidham (79) is a finalist for the Campbell Trophy. (Photo courtesy of Troy University Athletics)

Johnson and Doege are the only other Troy senior offensive players and both are in their first season with the Trojans. Both have also had big impacts, as well. Johnson – a St. Louis, Mo. native – started his career at UAB. This season, he’s made highlight reel catches a staple of his game and caught the game-winning pass against Texas State. He’s recorded 26 catches for 426 yards and three touchdowns so far this season.

Doege came to Troy as one of the most decorated and prolific quarterbacks in the entire country and the active passing leader in the country. The Lubbock, Texas native has started twice this season and led Troy to a come-from-behind win against South Alabama. He’s completed 44-of-64 passes for 575 yards and five touchdowns in 2022. 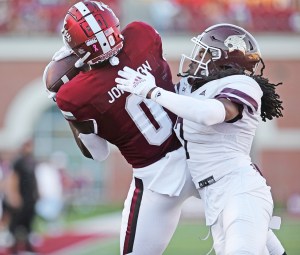 On special teams, punter Mike Rivers and kickers Brook Buce and Nick Woolfolk are seniors. Rivers came to Troy this offseason after three seasons as one of the top punters in the FCS at North Carolina A&T. This season he ranks sixth in the Sun Belt, averaging 43.1 yards per punt with 19 punts inside the 20. Woolfolk is a Richmond, Va. native that started his career at Virginia State, while Buce started his career at Georgia. Since coming to Troy, the Johns Creek, Ga. native has been one of the top kickers in the Sun Belt. Buce ranks second in the Sun Belt, converting 13-of-15 field goal attempts this season with a long of 51 yards.

The Troy defense, one of the top units in the country, is filled with senior leaders, as one would expect.

Steward is a Decatur native that started his career at Tuskegee, while Lacey has bounced from quarterback to receiver to defensive back during his Trojan career. The Opp native started as a walk-on quarterback in 2017 before moving to defensive back in 2018. Lacey then moved to receiver in 2019 and played there for the next three seasons. He tallied five catches for 65 yards during that time before moving back to defensive back this offseason. Lacey has nine tackles, one fumble recovery and one interception in his career and has also moved into Troy’s primary punt return duties.

Kyle Coale is one of the more unique players on the Troy roster. He’s officially listed as an “athlete” and has been described by Sumrall as the “Swiss Army Knife” of the Trojans. He’s spent the majority of his career as a kicker and punter but has also played defensive back, as well. During his career, Coale has averaged 36.8 yards per punt and 50.3 yards per kickoff. Coale has also won the Cory McCullers Spirit Award multiple times this season for Troy.

Williams started his career at Iowa Western Community College and the Omaha, Neb. native has been a role player on the Trojan defense ever since. He’s earned 46 tackles, six pass breakups, two interceptions and one touchdown in his three years at Troy.

Brown is a Miami, Fla. native that started his career at Highlands Community College before coming to Troy. Since that time, Brown has been one of the players to earn a spot in Troy’s deep rotation on the defensive line. He’s tallied 51 tackles, six tackles-for-loss and two sacks at Troy. 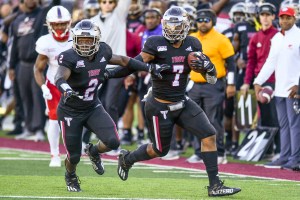 Robertson, Harris, Choloh, Slocum, Martial and Showers are all starters on the Troy defense and all standouts. Martial’s accolades are well documented but Robertson is also a two-time All-Sun Belt performer and has been a starter for four years. He’s tallied 226 tackles, 8.5 tackles-for-loss, three sacks, three interceptions and 10 pass breakups in his Troy career.

“Troy has meant so much to me,” Harris said. “(Troy) gave me a place that felt like home and made me feel welcome from the first day I got here as a freshman.

“The biggest life lesson (I’ve learned) is throughout anything that has happened, you just keep pushing forward and keep God in your life and keep praying and good things will happen for you.”

Slocum, like Martial, started his career at Troy as a walk-on and entered 2022 as a starter for the first time. During his Troy career, the Lake Butler, Fla. native has 178 tackles, 1.5 tackles-for-loss, two interceptions and 10 pass breakups.

Showers has been a mainstay on the Troy defensive line since 2018 and the Tucker, Ga. native has tallied 80 tackles, 13 tackles-for-loss, 9.5 sacks and three fumble recoveries in his career. 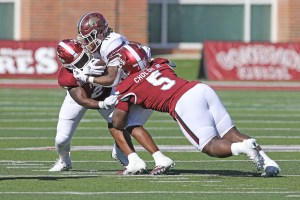 Will Choloh (5) and Carlton Martial (2) combine for a tackle. (Photo by Henry Otto/Creative Media Images)

Choloh is one of the most decorated Troy defensive linemen in recent years and is a three-time All-Sun Belt player. The Lawrenceville, Ga. native has 189 tackles, 31 tackles-for-loss, 17.5 sacks, three forced fumbles and three blocked kicks in his career. He’s recorded at least seven tackles-for-loss in three straight years and is on pace to make it four straight.

“A lot of people could have just counted us out or thought that his program was dead, but we as players had to buy in and believe in what the coaches were selling and we did that. We’re a proud group and I want that message to be Thank You.”

Showers said Senior Day would be a big day for him.

“It’s a very emotional game for me,” he said. “I really appreciate the community, the organization, the coaches, the players. All of those (players) I’ve been with throughout the years and become like brothers. Troy holds a special place in my heart and I really appreciate the fans. They may not know you personally but they care for you and wish nothing but success for you.”

Troy will hold Senior Day before hosting Louisiana-Monroe in a Sun Belt Conference game this Saturday at Veterans Memorial Stadium at 2 p.m.