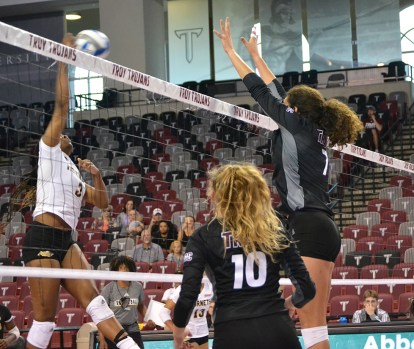 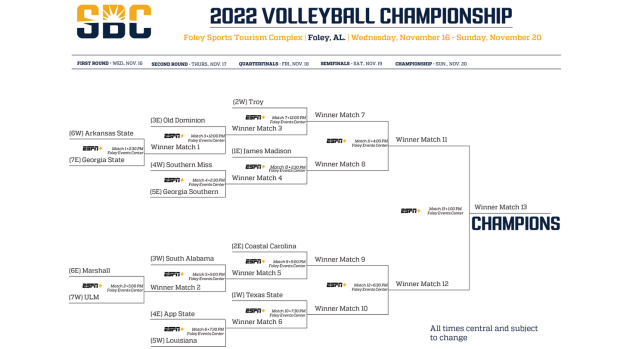 The Troy Trojans volleyball team (17-11, 11-5) finished off the 2022 regular season by splitting a Sun Belt Conference series with the Georgia Southern Eagles (15-11, 7-7) this weekend on the road.

In game one on Friday, the Trojans and Eagles slugged it out in five sets with Troy falling 3-2. Troy fell behind after losing the first set 25-19 but answered by taking the next set by a score of 25-22. In the third set, Georgia Southern retook the lead with a 25-22 win. Troy again tied the score in the fourth set with a 25-17 win before Georgia Southern closed out the match with a 15-13 win in the final set.

On Saturday, the Trojans answered with a 3-1 win in game two, snapping a three-game losing streak for Troy in the process. Troy went up early, 2-0, after taking the first two sets 25-23 and 25-23. Georgia Southern forced a fourth set with a 25-18 win in the third but Troy finished things off with a dominant win in the final set 25-12.

“Really proud of our team not only for the complete team effort win today but for an incredible and historic regular season,” Troy coach Josh Lauer said. “Our players have put in a tremendous amount of work since January, just to have the opportunity to compete the SBC Tournament for a conference championship. We are very excited for the week ahead, knowing that the most fun and competitive part of our season is finally here.”

Troy’s regular season run as been one for the record books in 2022. The Trojans tied a school record for consecutive wins with nine, as well as set a program record with 11 conference wins in a season. During the season, Anderson set the school record for career assists and Brooks set the school mark for career solo blocks and total blocks, as well.

Hester’s 466 kills this season is the third most in school history with a chance to take second place during the postseason. Brooks also cracked the Top 10 in career kills this season and her 31 solo blocks in 2022 also ranks fourth in a season in school history, putting her within striking distance of the school record, set by Enterprise native Janie Wiggins (42) in 1993. 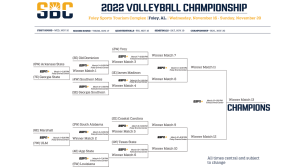 The Trojans now turn their attention to the Sun Belt Conference Tournament in Foley this coming weekend. Troy earned the No. 2 seed in the Sun Belt West, which gives the Trojans a bye all the way to the Conference Quarterfinals. On Friday, Troy will play the winner of Old Dominion vs. the winner of the Arkansas State/Georgia State first round game at noon in a match that will stream on ESPN+. The semifinals take place on Saturday and the Conference Championship will be Sunday at 1 p.m. on ESPN+.