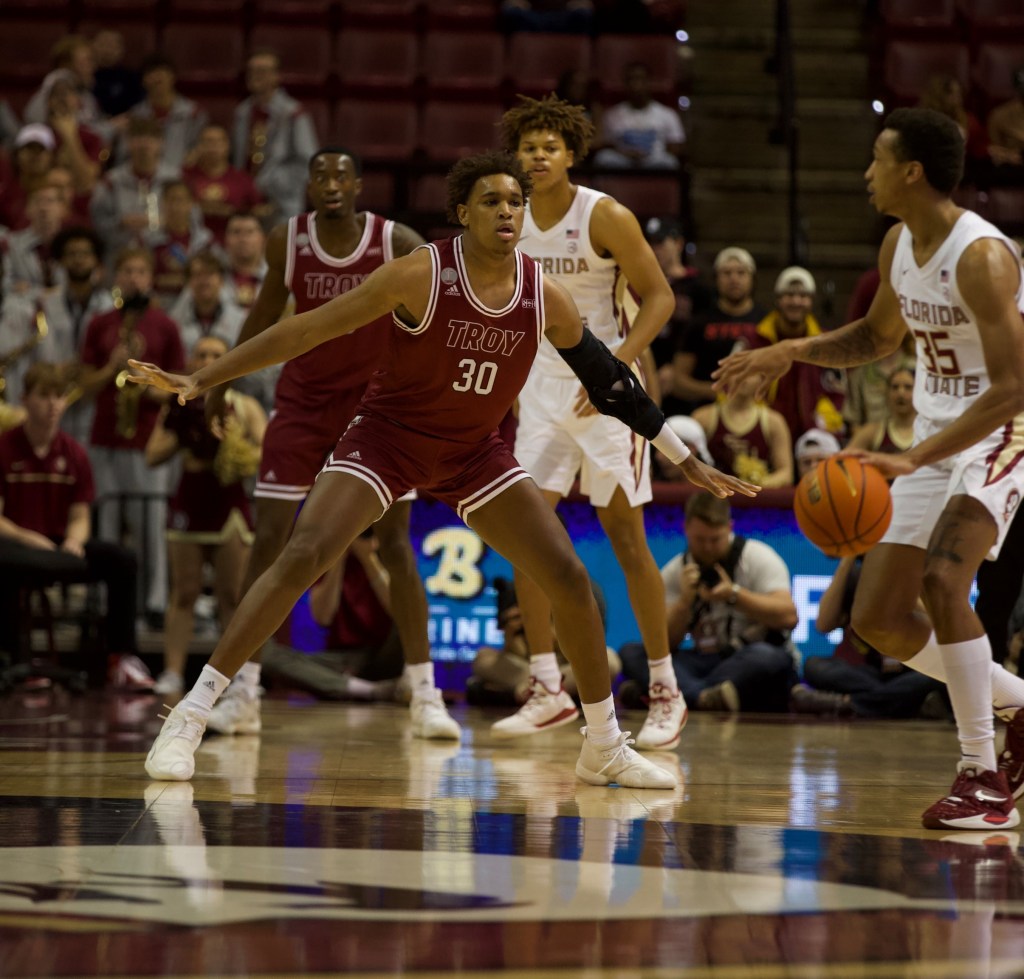 Christian Turner (30) and the Trojans beat Florida State on the road on Monday. (Photo courtesy of Troy University Athletics)

The Troy Trojans (3-0) men’s basketball team headed down to Florida on Monday night and came away with a 79-72 win over the Florida State Seminoles (0-3).

Troy’s Aamer Muhammad knocked down a three to open the game and the two sides battled back-and-forth for the next several minutes. Troy then went on an 8-0 run to go up 13-6 with 13:30 left in the first half. FSU responded with a 7-0 run of its own to tie the score 13-13 with 10:00 left in the first half. Another 7-0 run a few minutes later gave the Seminoles a 24-22 lead with three minutes left in the half.

Muhammad and Kiefer Punter knocked down a pair of layups to put Troy back up 26-24 with a minute left followed by a three from Christyon Eugene to extend Troy’s lead to 29-24 with just 30 seconds left in the first half. After an FSU free throw, Muhammad knocked down a long three as time expired in the half to give Troy a 32-25 lead at halftime.

After the two sides traded scores to open the second half, FSU started to get hot and tied the score at 48-48 with 10:30 remaining. Troy proceeded to go on a 6-0 run to go up 54-50. Eugene hit a three with 2:45 left to put Troy ahead 67-61 to start a 10-3 run for the Trojans. Zay Williams knocked down a three and then Eugene stole the inbounds pass and hit a layup before Muhammad drilled yet another three to give the Trojans a 76-64 lead. As FSU shot desperate threes to finish off the game, the Trojans held on for the 79-72 win.

“I saw the first shot go in and the rest was history,” Muhammad said. “I get hot quick, I’m like a microwave. When I see the shot go in early, it’s going to be a long night for you.”

Muhammad said the Trojans sent a message to the rest of the Sun Belt with the win.

“We just proved we’re tough,” he emphasized. “Like Coach (Scott) Cross said, ‘We’re going to send a message tonight.’ Hopefully, we sent one that we’re coming.”

Troy now heads to Montana to compete in the University of Montana Basketball Tournament. The Trojans play Merrimack on Nov. 17 following by facing off against St. Thomas on Nov. 18 and Montana on Nov. 19.