Folks back ‘Piddlin’ Around’ at Brundidge Theater 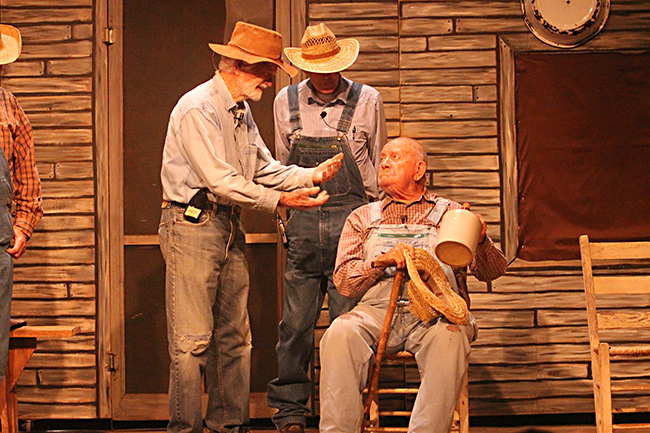 The 20th season of Alabama’s Official Folklife Play, “Come Home, It’s Summertime” opened at the We Piddle Around Theater in Brundidge Thursday night. The three performances were dedicated to the memory of eight “family” members who were lost during the two years the theater doors were closed.

The narrator was lost to the flu and the sound system was disrupted by the weather conditions on opening night.  But the show must go on — as it has in years past – with flashlights, pounding rain on the tin roof and sirens sounding.

Lawrence Bowden, president of the sponsoring Brundidge Business Association, and Johnny Steed, are the two original cast members. Both are dedicated to the original folklife play and to their hometown, Brundidge.

“Personally, I take great pride in ‘Come Home,’” Bowden said. “It’s a reflection of who we are and what we are as a community – a wide community. It was difficult getting started back after two years. It took dedication and hard work to make it happen. Unless you are involved, there is no way to know and understand how hard it was to open the door again.

Bowden, laughingly, said sometimes there was some huffing, puffing and fussing.

“But we appreciate each other and love each other so it all ironed out when the audience laughed and clapped and then got thoughtfully silent,” he said. “The mission of the BHS is to preserve and promote the cultural and physical heritage of our community. I think we do a right good job of that. At one count, 23,000 people had ‘come home at suppertime.’ And, hopefully, we will be blessed to open the doors of the We Piddle Around Theater at suppertime and at other times including the Chili County Christmas and the Pike Piddlers Storytelling Festival. We have tentative plans for new folklife play in the spring and few other ideas we want to try. But any success we have depends on those who walk through the door of the We Piddle Around Theater and leave thinking being there was well worth their time.”