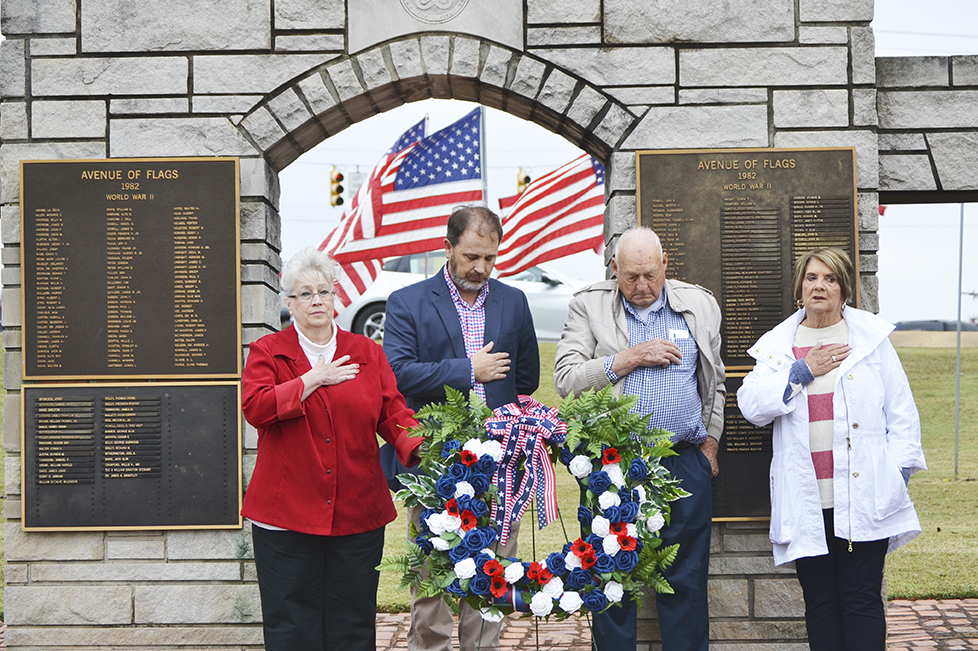 Members of Major Jimmy Copeland, Joe Frank Walters Jr. and Lt. Comm. Lola Blanton are joined by members of Troy American Legion Auxiliary in laying a wreath in honor of the fallen veterans at Bicentennial Park’s Wall of Honor. (Photo by Josh Boutwell)

The American Legion Post 70 and Post 70 Auxiliary honored those who have served in the U.S. Military on Veterans Day, Nov. 11, at Bicentennial Park in Troy.

The auxiliary held a special ceremony to add three names to Bicentennial Park’s Wall of Honor, which contains the names of the deceased men and women from Pike County who have served in the military.

The names added to the wall were Major Jimmy Copeland, Joe Frank Walters Jr. and Lt. Comm. Lola Mildred “Millie” Blanton. Copeland served in the U.S. Army National Guard for more than 20 years, with active service in Operation Desert Shield/Desert Storm. Following his service in the military, Copeland served as a Pike County Commissioner and is a native of the Ebenezer Community in Pike County. He also worked as an insurance agent and Director of Special Projects for Troy Cable. 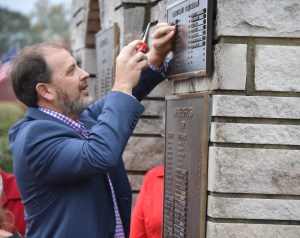 Chad Copeland places his father, Jimmy Copeland’s, name on the Wall of Honor.

Walters served in the U.S. Army in Korea and following his service, he worked for more than 25 years as a member of the U.S. Postal Service. He also spent time as a real estate agent.

Blanton served for more than 20 years in the U.S. Navy, where she was a Registered Naval Nurse. The Brundidge native was a graduate of Pike County High School and went to St. Margaret’s School of Nursing in Montgomery. Following graduation, she entered the U.S. Navy and following her retirement, she returned to Brundidge and worked as a registered nurse at Edge Regional Medical Center.

“Everything that we have, we owe to our veterans and so many of them struggle now at home and so many have given the ultimate sacrifice,” Mayor Jason Reeves said. “When you think about the fact that less than three quarters of one percent of this population is serving in the military right now, we are doing so much more with less than anybody else on this planet. It’s really what makes us remarkable. 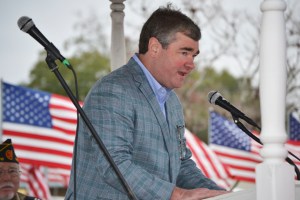 “I got a call early about there may be bad weather and did I want to still put the flags out, and I said, ‘Absolutely, I want to put the flags out,’ because every one of those flags represents one of our veterans. There will be a great sense of pride for me tomorrow when the cadets of the U.S. Military Academy ride down that highway on the way to the football stadium and see these flags that represent our veterans.”

The guest speaker for the Veterans Day Service was Troy University Graduate Lt. Col. Jason Adams of the U.S. Space Force. A Dothan native, Adams joined the U.S. Air Force after graduating from Troy and spent 18 years as a member of the Air Force before joining the Space Force.

“You might ask, ‘Why do we need a Space Force?’ For many years the United States has become increasingly reliant on the capabilities that space provides,” Adams said. “It is a force multiplier across the air, land and maritime domains, and a key enabler to our daily lives and how we fight and win wars as a nation. 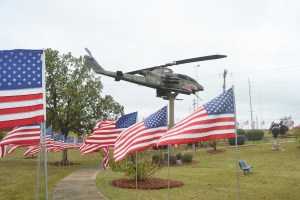 “Military satellite communications, intelligence collection, early warning, weather forecasting and the Global Positioning System (GPS) are all crucial to ensuring we maintain our advantage in any conflict. Our adversaries understand how important these space capabilities are to the United States and they are actively working to build their own and test ways to deny us the same. Just as we have other services to protect America’s interests in the air, the land and at sea, the Space Force was created to secure the space domain: the ultimate high ground.”

Adams also shared a message to local veterans and to the residents of Pike County for Veterans Day.

“Your service is part of our history and you should be proud of your contributions to this nation’s security, whether it was for one enlistment or over a 20-year career,” Adams emphasized. “All of you have made a difference in one way or another. I would also ask (residents) if you know a veteran, to use this day as an opportunity to reach out and let them know that you are thinking about them. Send a note, a text or, better yet, give them a call. It will probably mean more to them than you might think.”