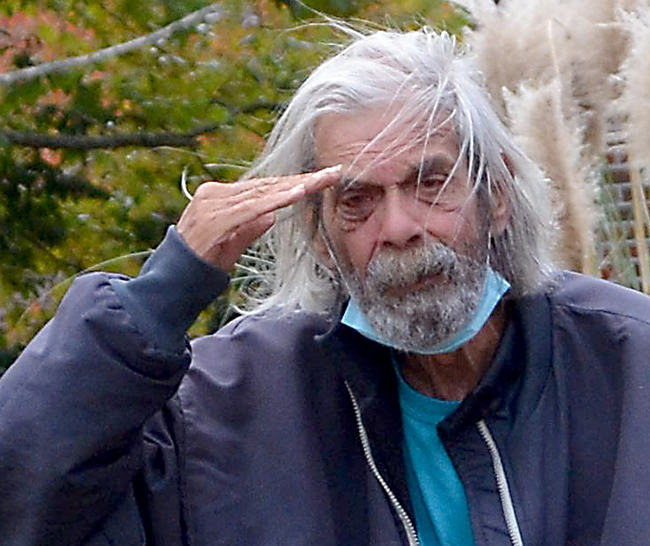 Jaine Treadwell | The Messenger A veteran at Serene Manor in Brundidge salutes the flag during a Veterans Day service in Brundidge.

A yellow school bus stopped street side at Serene Manor in Brundidge, home to 11 veterans who, once had no place to call home.

The young students were also there to celebrate the raising of the American flag so that everyone who passes Serene Manor in Brundidge will know that those who live there love and honor America.

Pike County Elementary School Principal Rodney Drish said it is important for young students to know and understand what the American flag represents and to know about those who have defended the Stars and Stripes on America’s homeland and in distant places around the world.

Drish said the 60 students, who came to the manor to meet the veterans who call it home, are Baby Betas. They are recognized as honor roll students, good citizens and are of good character.

“We are excited to start a new chapter with Baby Betas” Drish said. “Our students are learning at a young age how important it is to contribute to community service.

The Pike County Elementary School Baby Betas group was created to show students the importance of giving back to others.

For the students, it was also an opportunity for them to put faces on veterans who have served and are now having to depend on the service of others.

For the students and teachers, the flag was a symbol of the “kinship” between the Pike County Elementary School students and Serene Manor and also the veterans who live there.

It was a memorable moment for the faculty members in attendance, the students but most of all, for the veterans and the one who stood alone. The one who saluted the flag under which he served.

His salute did not go unnoticed. And, it was a student who acknowledged him with a quick salute.