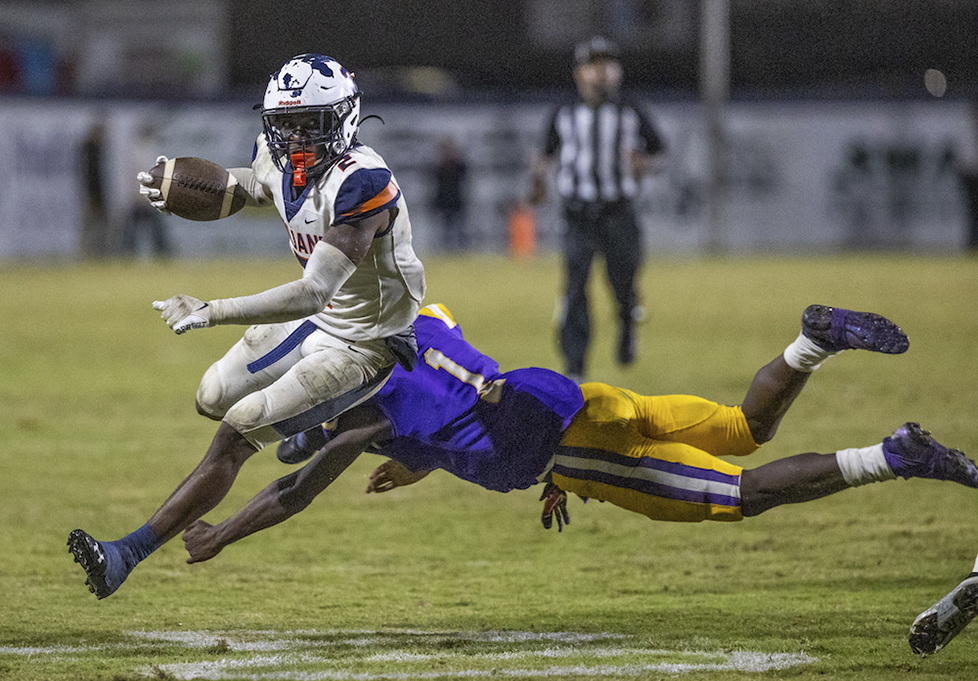 CHHS junior defender Jywon Boyd, 2, returns one of his three interceptions in Friday’s 34-7 win over Tallassee in the second round of the 5A state playoffs. (Photo by Dan Smith)

TALLASSEE, AL – As the Charles Henderson High band played its Alma Mater following a 34-7 win over Tallassee in the second round of the AHSAA Class 5A state playoffs, CHHS Head Coach Quinn Hambrite could have placed emphasis on many keys to a huge win, but instead, he gave thanks.

“Advancing to the third round is a blessing, a privilege, and an honor,” said Coach Hambrite. “I am just grateful. I thank God for allowing me to be in this position. I thank the Troy City School Administration for allowing me and trusting me to lead this football team. I am grateful for all of that. Right now, the feeling I am feeling is being thankful.”

CHHS, improving to 10-1 on the year and ranked 10th in the state, will advance to play UMS Wright-Prep this upcoming weekend in Troy. UMS, 11-0 on the season and ranked No. 1 in AHSAA Class 5A, was a 41-30 winner over Beauregard Friday evening in Mobile.

The defense of CHHS kept the Tigers on they heels all night, the Trojan offensive was explosive, and special teams was, quite frankly, something special.

Junior quarterback Parker Adams had a big night hitting 14-of-25 passes for 254 yards and two touchdowns, while junior Jywon Boyd had another outstanding night, catching nine passes for 195 yards and two TD’s, while intercepting three passes on defense. Junior running back Zack Coleman churned out 104 yards on 14 carries and a TD against a solid Tallassee defense.

When placekicker Nic Peerson was not blasting non-returnable kickoffs into the end zone, he was perfect hitting two field goals and four extra points.

“We were balanced not only on offense and defense, but also on special teams,” said Coach Hambrite. “Nic Peerson was 100-percent in everything he did today, and he almost kicked it in the end zone when we were backed up on a 15-yard penalty. To me he is the player of the game.

“I thought we played a clean game for three quarters, almost four quarters, but we lost our minds a little bit with penalties in the fourth quarter. I was most proud of them for that. When we play clean games, the score looks like this, minus the coaching mistakes, and I put all of that on myself. I’m just proud of the way we executed the game plan. They did an excellent job.”

It was Peerson that put CHHS on the board first when he launched a 48-yard field goal to put the Trojans up 3-0 with 9:19 to go in the first.

The strong-legged kicker put CHHS out front 6-0 with 5:22 to go in the second quarter on a 36-yarder. Peerson also handles the punting duties for CHHS, but never got to pin the Tigers deep as the Trojans did not punt on the night against Tallassee.

Sophomore running back Antonio Frazier had 29 tough yards rushing on the night and scored a touchdown from 4 yards away and CHHS led 13-0 at the half.

CHHS will play this upcoming Friday evening in Troy against UMS-Wright.