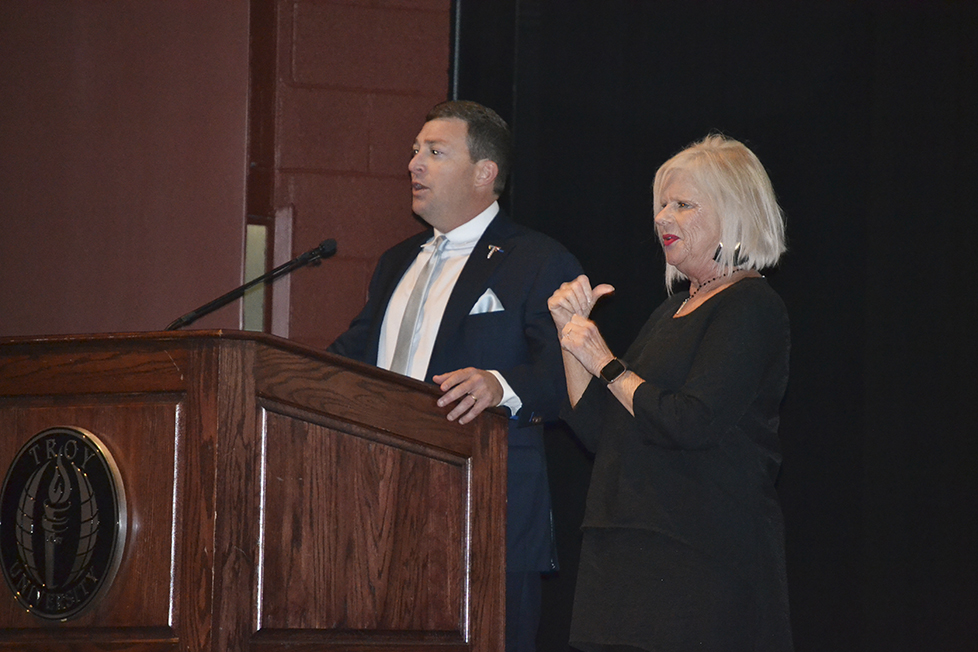 With Veterans Day on Friday, Troy University decided to reach out to retired Army Staff Sgt. Luke Murphy to give the 25th Annual Helen Keller Lecture on Thursday.

Troy University Chancellor Dr. Jack Hawkins and his wife, Janice Hawkins, started the Helen Keller Lecture Series in 1995. Dr. Hawkins – a former Marine himself – spent 10 years as President of the Alabama Institute for the Deaf and Blind in Talladega before coming to Troy. Through the years, Troy has brought in guest lecturers to speak as a part of the Helen Keller Lecture, including politicians, actors, athletes and others.

Murphy joined the U.S. Army National Guard following the events of Sept. 11, 2001, and eventually became a member of the Army’s 101st Airborne Division. In 2006, Murphy was injured in an explosion, which resulted in the loss of his right leg above the knee. He was forced to undergo 32 surgeries and extensive physical therapy following the injury.

Following his service, Murphy received a number of commendations including the Purple Heart. Murphy now competes in marathons and travels across the world with the Achilles Freedom Team of Wounded Veterans, and serves on the National Campaign Team for the Wounded Warrior Project. While Murphy said he doesn’t like to speak, he was humbled when asked to be the guest lecturer for the Helen Keller Lecture.

“It was a humbling thing to be asked to speak. I really don’t like to speak but the trick is to look comfortable doing it,” Murphy said with a smile. “I was definitely humbled and I obviously started looking up other Helen Keller Lectures.

“Yes, I’m disabled but I think there’s different levels of disability and I think to be blind and deaf would be the hardest. I was a little intimidated and humbled but it is important to tell your story. It’s not easy and, in my case, I was in combat, so some of my buddies didn’t come home. So, it’s not just my story, it’s their story. It’s important that everyone knows their sacrifice and my small sacrifice.”

Murphy described the struggles he went through – mentally and physically – during his deployment and the aftermath of his injuries.

“My message today would be that we’re all going to deal with adversity in life and it’s a true test of character and it’s about how you respond,” he said. “We all get knocked down and we all need to be resilient. There are certain tools that you can ply to get through those things.

Murphy said that he hopes that his story could change even just one person, because of the impact that can have.

“There’s nothing more powerful than your story and people that tell their stories can maybe help change even just one person’s view or opinion. If your story is powerful enough to change one person, maybe that person can change the world.”

With Veterans Day on Friday, Murphy pointed to the importance of voting and the freedom that brings to Americans.

“We just came off an historic election and it doesn’t matter what side of the aisle you’re on, it’s about the freedom to go out and vote,” said Murphy. “I was tasked with protecting voting sites in Iraq and they would shoot at the people trying to vote and try to blow them up, but they would still come and still cast that vote.

“I feel like folks should look more into what our veterans have done and why we celebrate Veterans Day and appreciate all the little freedoms.”

Murphy said he doesn’t believe anyone should have to “thank” veterans on Veterans Day but acknowledge the freedoms that those that have served afford for all Americans.

“Some of us are just born with a servant’s heart and people think all the time that we’re just a real aggressive person or adrenaline junkies,” he continued. “That’s not it at all, most veterans are put on this planet to help, not to hurt. We can be extremely violent or extremely soft.

“It’s just about knowing when to do what and for what purpose. What veterans fight for can’t be quantified; it’s in our heart. We fight for each other, we fight for you and we fight for those that haven’t even been before yet. Just take a minute, you don’t have to thank anyone, just acknowledge it and be appreciative of your freedoms. I certainly am.”