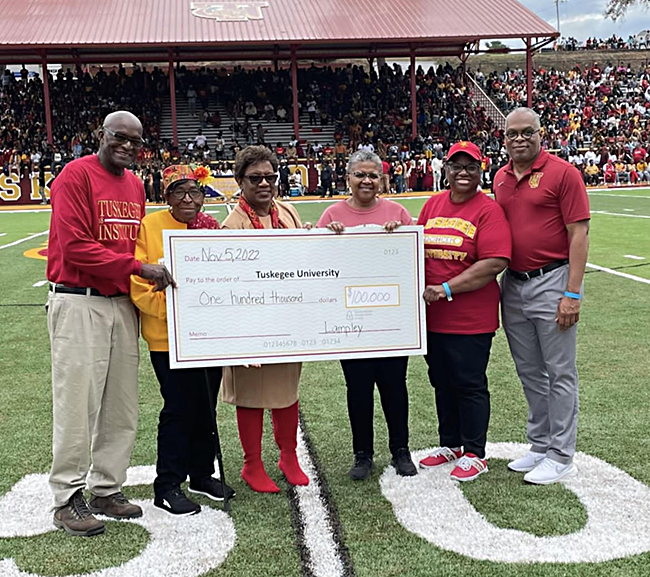 Lampley requested that 50 percent of the donation go to the university’s athletic department and 50 percent to fund student scholarships and grants.

“Neither my father, the late Hurrie D. Lampley, nor my mother, Ola Mae Lampley, who is 92 years old, had the opportunities that I have had,” Lampley said. “The highest level of education my parents completed was the sixth grade for my father and ninth grade for my mother.  My father was an industrious, hard-working man and my mother worked diligently by his side in our very large operation in Brundidge. I am the fourth of my parents 11 children.”

Lampley said his oldest sibling, the late Mary Virginia Lampley Flournoy, was the first to attend college and one of the first African Americans to be employed by the Brundidge textile factory.

In August 1972, Joe Lampley entered Tuskegee Institute – later Tuskegee University-with a $500 National Defense Student Loan a semester. That not being enough, he tried out and made the football team. He later received an Army ROTC scholarship and graduated at a Distinguished Military Graduate.  He was commissioned as a Second Lieutenant in the Army Reserves in 1976. However, he received a deferment from active duty to go to school.

Lampley enrolled in Southern University School of Law and graduated with a Juris Doctor Degree. He passed the Louisiana State Bar Exam and entered active duty in the Army’s Judge Advocate General at the rank of captain. He served the four-year’s repayment for the ROTC Scholarship at Redstone Arsenal in Huntsville and opened a law office there.

Lampley found the road to obtaining a law degree a bumpy one. The only law school that offered him any assistance was Southern University.  It was a small grant.  He left home headed to Washington D. C. to enroll in Howard University School of Law.

“However, I stopped at a traffic light in Montgomery and the Lord told me to go to Baton Rouge and enrolled in Southern University School of Law. I did.”

There, Lampley met the assistant dean of the Law School and found they had a common interest in agriculture. With the dean’s help and support, Lampley graduated in May, 1979, with a Juris Doctor degree.

“My philosophy has always been ‘do what you can and leave the rest to God,’” Lampley said. “I believe in planning; however; I also believe in not trying to cross a bridge until I come to it.”

Lampley continues to stand on the strong educational foundation that he received at Tuskegee University.  Members of Lampley’s family are also graduates of Tuskegee University including his brother, Brewnoise Lampley, who received a degree in Industrial Arts, and his brother, Willie Lampley, who graduated from TU with a B.S, degree in Agriculture Education.

Lampley’s son, Jonathan, graduated from TU with a degree in Forestry and Natural Resources. He is currently employed by the U.S. Forestry Service.

“I am so proud to be a part of the legacy of Hurrie D. and Ola Mae Lampley,” Joe Lampley said. “My parents gave my siblings and me so much love. They instilled in us the love of God, a belief in God and an appreciation for hard work and with the knowledge that we are just as good as anybody else.

“All of our family is indebted to Tuskegee University. We are better today because we were able to study at TU and walk its hallowed grounds.”