Troy women’s basketball opens the season with a road win 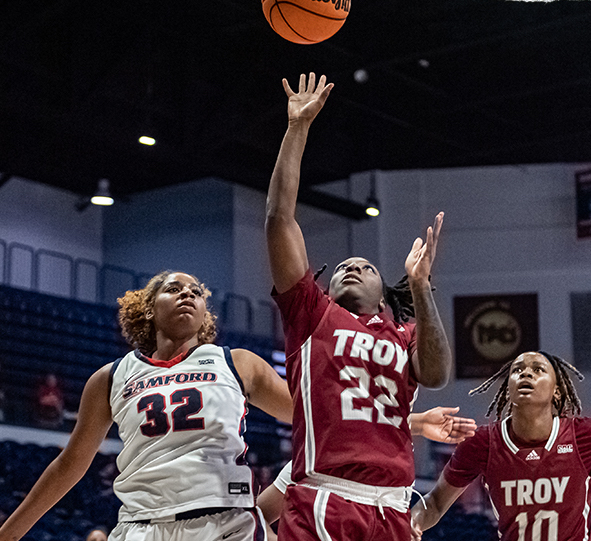 Sharonica Hartsfield (22) and the Trojans defeated Samford on the road. (Photo courtesy of Troy University Athletics)

Troy and Samford battled back-and-forth for the entirety of the game but with the game tied 52-52, with under five minutes left, Alabama transfer Nia Daniel put Troy ahead 54-52. Tai’Sheka Porchia extended the lead to 56-52 with a steal and layup with 3:06 left, as well.

Samford responded with a three-pointer with 2:55 left, though, to cut the Troy lead to 56-55. The Bulldogs then took the lead 57-56 on a put-back layup from Sussy Ngulefac with 1:46 left but Troy’s Makayia Hallmon answered right back with a jumper to give the Trojans a 58-57 lead.

Ngulefac hit another layup to put Samford up 59-58 with just 35 seconds left. Troy’s Felmas Koranga then grabbed a rebound for the Trojans with 17 seconds left and was fouled going back up. Koranga knocked down both free throws to put Troy back on top 60-59.

Samford made things interesting when Alyssa Tarpley knocked down a three with just three seconds left to cut Troy’s lead to 64-62. The Bulldogs were forced to foul immediately to conserve time but Hallmon knocked down both free throws and secured the 65-62 Trojan win.

Andrea Cournoyer led Samford with 25 points and nine rebounds and Ngulefac had 13 points and eight rebounds. The Trojans forced 25 turnovers and outrebounded the Bulldogs 66-40 in the win.