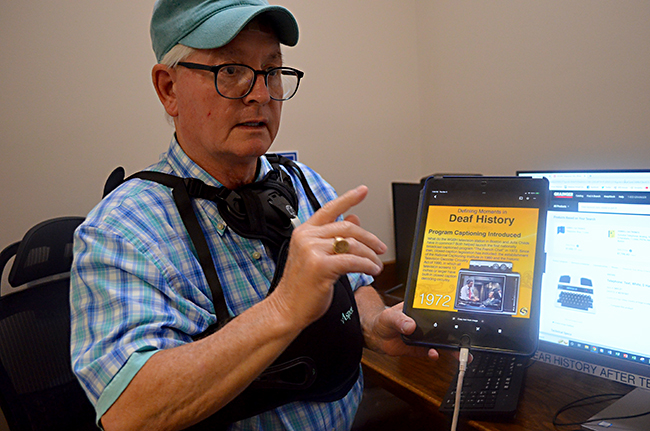 On Thursday afternoon, Robert Dansby, who is hearing impaired, and Beverly Bownds, Alabama Institute for Deaf and Blind interpreter coordinator, visited the Brundidge city library to demonstrate how the TRS operates and how it will benefit the library and its hearing-impaired patrons.

Bownds said the Telecommunications Relay Services (TRS) allows those who are deaf, hard of hearing, deafblind or have speech disabilities to communicate by telephone in a way that is functionally equivalent to telephone services used by those without such disabilities.”

Theresa Trawick, library director, said Dansby, a library patron who lives in the Brundidge area, was the one who alerted her to the TRS service.

“Robert was excited about the TRS service and what it means to him to be able to communicate “by telephone” to other through an interpreter,” Trawick said. “Until he had this service, Robert communicated by signing or hand writing. Now, he can communicate on the telephone.”

Trawick said, under Title IV of the Americans with Disabilities Act, as amended, the Federal Communications Commission must ensure the provision of TRS which is available in all 50 states, the District of Columbia, Puerto Rico, and all other U.S. territories for local, long distance, and international calls.

Bownds said, in all forms of TRS, communications assistants (CAs) or other authorized intermediaries such as automated speech recognition (ASR) facilitate telephone calls between persons who are deaf, hard of hearing, or have speech disabilities and other individuals. There is no cost to the users. TRS providers are compensated from either a state or a federal fund, which is administered by the TRS Fund Administrator. Some forms of TRS have voice and hearing carry over options so callers may use their own voices or residual hearing if they prefer to do so.