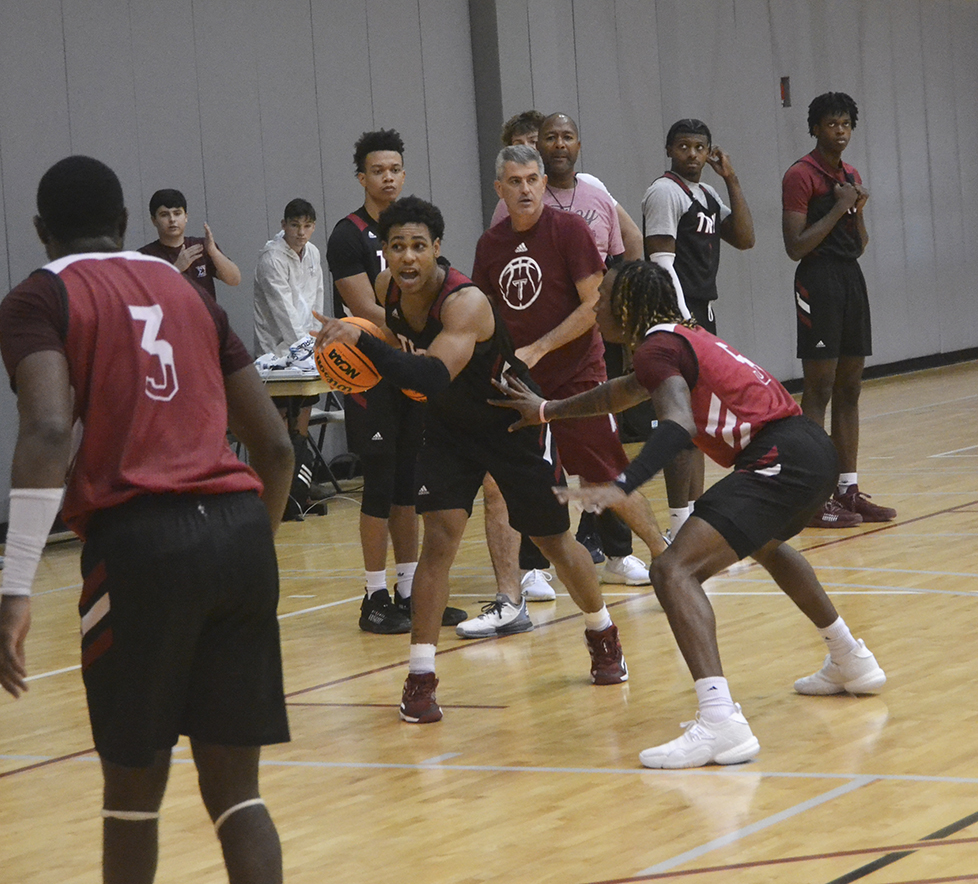 The Troy Trojans men’s basketball team held their final full practice of the preseason on Friday morning as they get set to open the season on Monday at home.

Troy coach Scott Cross is entering his fourth season at the helm and he’s been enthused by his team during the preseason.

“Our guys are working really hard and they had really great energy today. We’re just super excited to make it official and have that first game,” Cross said. “We’re thankful we’re playing in front of our home crowd, which we feel like is the best home court in the Sun Belt.

“I think overall (practices) have been really good. We started back at the beginning of June and had all the practices for the foreign tour and had our summer workouts after that. Our team chemistry to me is at an all-time high. It’s the best since I’ve been here.”

“I think it’s a great mixture of older guys, newer guys and younger guys,” Williams said. “I feel like we’ve all come together and have learned each other. Earlier in the year, the trip to Costa Rica, I feel like helped us learn each other and spending time off the court has brought us together.”

Cross – who is a defensive minded coach – has also especially pleased with the way his team has embraced his philosophy.

“I love our defensive intensity,” said Cross. “The guys are really, really buying into what we’re trying to do and our rotations are really good.

“Coach Cross is a defensive minded guy and I love playing defense,” Fields emphasized. “I won Defensive Player of the Year in high school, so coming here and I’m bringing the defense and the energy every single day. I feel like that’s my job and that’s what I’m going to do.”

Cross and his coaches are looking to his captains, Williams and fellow senior Kiefer Punter, to lead the way this season. 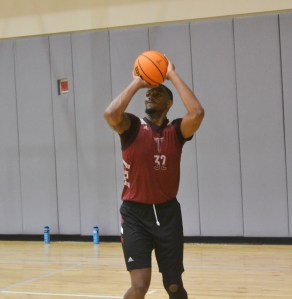 Senior Lydell Geffrard (32) is expected to bring a presence inside for the Trojans this season. (Photo by Josh Boutwell)

“He’s been here the longest and he’s one of the most coachable guys I’ve ever been around. He’s a great basketball player and preseason Third-Team All Conference,” Cross said of Williams. “He just does everything right. If I could clone him and make every single guy just like him, I would. He’s just a joy to coach.

“Kieffer Punter is very, very similar in a lot of ways. He’s also a joy to coach and very coachable. He’s a great three-point shooter and can really, really play but he also leads by example. He’s one of the hardest workers. Both of those guys will step up and speak when the time is right, too.’

Williams said that he prides himself in being a leader on the team.

“I’m just being myself. My coaches trust me to lead our guys and be an extension of (Cross) on the court,” Williams emphasized. “So, I just come in every day and do my job and do the right things to make sure I lead by example.”

Of Troy’s new faces, Cross pointed to a trio of transfers as players he expects to make an impact in the 2022-2023 season.

“Ameer Muhammad is a combo guard that can really score. He’s probably one of the best scorers on our team and can shoot it from just about anywhere,” he said. “He’s also a good team defender and can pass the ball and he’s explosive going to the basketball. He will be one of our top scorers if I was going to guess right now.

“Darius McNeill’s been all over the place and he’s been phenomenal to coach. He’s very smart and a very tough guard that we can play at the one or two. He can really shoot and he lives in the gym. He’s one of the hardest workers I’ve ever coached. Nelson Phillips is another transfer that is probably the best offensive rebounder that I’ve ever coached. He has a knack for it and every time a shot goes up he flies in there. He’s also a really good three-point shooter and rangy defender that will be able to get a lot of steals, too.”

Fields is one of Troy’s freshmen expected to make an impact this season.

“I just really want to get in and do what I can to help us win,” Fields flatly said. “I don’t have any personal goals – like scoring or anything – myself, I just want to do whatever I have to do to help. If that’s playing defense, blocking shots, getting rebounds, scoring, it doesn’t matter to me. I’m going to do whatever we need to help us win.”

Some of Troy’s departures from last year’s team leaves a hole in the bulk the Trojans had inside, which Cross hopes his team’s athleticism will be able to make up for.

“Height wise we’re probably the same but we definitely lost some of our bulk from last year,” Cross said. “Lydell Geffrard will play a lot more minutes this year. He’s a similar body composition to those guys (form last season).

“Outside of him, all of our guys are long and athletic. We’re able to with a lot of screens and hopefully we can be really disruptive because of our length and quickness.”

Troy opens the season on Monday, Nov. 7, at home against Montevallo at 6 p.m. in Trojan Arena. The game will also stream on ESPN+.