Andrew Mack Gibson, age 83, a resident of Troy, Alabama, died Wednesday, November 2, 2022, at Flowers Hospital in Dothan, Alabama. Funeral services will be held Sunday, November 6, at 3 p.m. at the First Baptist Church of Troy. Dr. Ross Lankford will officiate and Dillard Funeral Home of Troy will direct the service. Visitation will be held two hours prior to the service from 1 – 3 p.m. in the parlor of First Baptist Church. 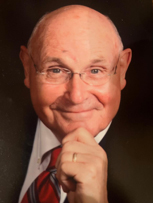 Gibson was born in Glenwood, Alabama, and graduated from Luverne High School in 1957. He attended Baylor University and graduated with a degree in accounting. After serving in the United States Army, he returned to Troy and married Mary Smith in 1969. He was a partner at Gibson & Carden, LLC, in Troy and practiced accounting for more than 50 years. As an avid arts advocate, Gibson helped establish the Johnson Center for the Arts in Troy and was awarded the Alabama Governor’s Arts Award in 2015. He was an active member and deacon at First Baptist Church of Troy and served as a chairman of the finance committee. In 1999, Gibson was awarded the Paul Harris Fellows award acknowledging his active involvement in Rotary.

He was preceded in death by his parents I.D. and Corrie Jackson Gibson.

Memorial donations may be made to the Johnson Center for the Arts or First Baptist Church of Troy.

Ronald Mack “Ronnie” Morgan, age 82 a resident of Troy, died Tuesday, November 1, 2022 at his home. Funeral services for Mr. Morgan will be held Saturday, November 5, 2022 at 11am in the Chapel of Dillard Funeral Home in Troy with Rev. Jim Powell officiating. Visitation will be held one hour prior to the service from 10-11am. Burial will follow the service at Pleasant Hill Cemetery.

Ronnie was a loving husband, father, grandfather, brother and friend. Anyone who knew Ronnie knew he was a hard worker. Whether it was his time in the military, as a farmer, or as a long time county commissioner. He spent much of his time serving others especially the people of pike county. He was on numerous boards and committees committed to the progression of the area. Ronnie loved the outdoors and made a good career out of it as a farmer and member of the cattlemen’s association. He was a proud Christian and was strong in his faith. Perhaps above all else he loved his family and treasured anytime he was able to spend with them. He was loved by many and will be missed by all who knew him.

He was preceded in death by his parents: Emory and Vonceil Morgan; and siblings: Michael T. Morgan, Sherry Schoen, Judy Morgan

or a charity of your choosing